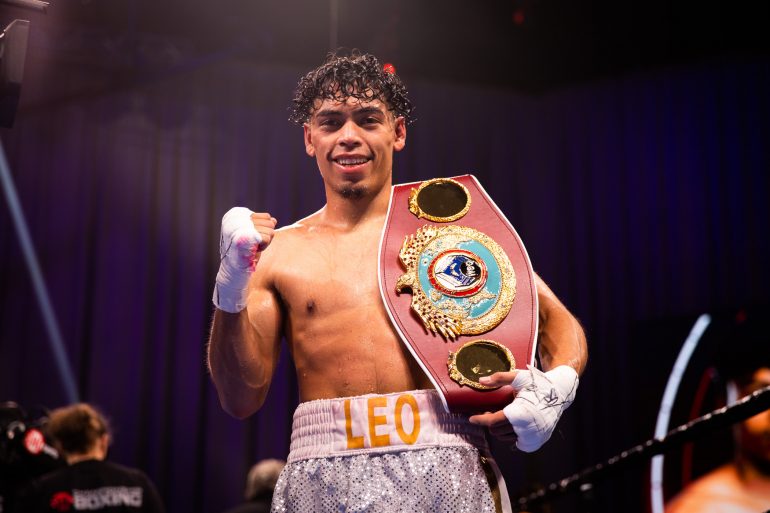 Angelo Leo poses with the WBO Junior Featherweight title after his win over Tramaine Williams in August. Photo: Amanda Westcott/Showtime

The announcement will take place at the beginning of Wednesday’s Albuquerque City Council meeting which will stream live on the GOV TV – Boards and Commission Meetings’ Youtube channel (https://youtu.be/IKRoKUx4iR0).

Those in Albuquerque with Comcast can also watch locally on channel 16. The announcement will be made by city councilwoman Klarissa Peña

Leo (20-0, 9KOs), who is signed under Floyd Mayweather’s Mayweather promotions, is primarily being honored for his August 1, 2020 unanimous decision victory over a previously undefeated Tramaine Williams. With the win, Leo claimed the vacant WBO Super Featherweight boxing world title.

“I’m extremely honored and blessed to be part of this city and be a party of history”, says Leo of the honor. “This is the city who made me who I am.”

The Albuquerque City Council’s proclamation for ‘Angelo Leo Day’ is expected to read as follows:

WHEREAS, with an undefeated professional record of 20 victories, 0 defeats with nine knockouts, Angelo Leo is just the fourth native New Mexican to win a world boxing championship; and

WHEREAS, Angelo Leo was named the 2019 and 2020 New Mexico Boxer of the Year by Caged Minds Combat Sports, and SouthWest Fight News; and

WHEREAS, Angelo Leo overcame homelessness and now helps the less fortunate in his current hometown of Las Vegas, Nevada.

BE IT PROCLAIMED THAT THE COUNCIL, THE GOVERNING BODY OF THE CITY OF ALBUQUERQUE, HEREBY RECOGNIZES ANGELO LEO