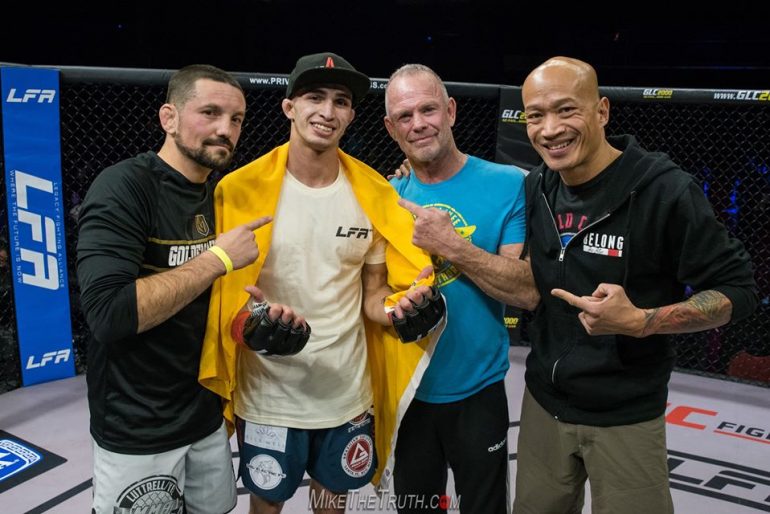 Rivera had to be ready and prepared for contact, even if that preparation was close to impossible to achieve given the circumstances he faced.

That was all back in March, during a trying and confusing time in the world, and as we fast-forward five-months to Rivera making the trip to Las Vegas, Nevada to bunker-down near the UFC Apex until Tuesday evening’s showdown with “Lazy Boy” Luis Rodriguez (10-1) on the Dana White Contender Series, Rivera will have wrapped up a camp that spanned 20-weeks – if not slightly longer.

Before Covid-19, Rivera was scheduled for his highly anticipated rematch with Brandon Royval. Back in May of 2018, Royval and Rivera clashed for all of 40-seconds before a freak-accident elbow dislocation ended the fight early. Royval walked away with a win due to injury, Rivera left the arena straight to a hospital to work on a damaged arm.

“I had a surgery most baseball fans know as ‘Tommy John Surgery’, which can in many cases be a career ender for baseball players. My elbow was in rough shape.” – Jerome Rivera

The injury was a major set-back for Rivera who had just competed for the Inaugural Flyweight Title for LFA. Rivera underwent surgery in the weeks following the fight and began a grueling rehabilitation process that put Rivera and his momentum on hiatus for nine months.

Chomping for redemption, an inevitable rematch with Royval was always on Rivera’s radar and earlier this year that showdown was scheduled to happen. After an impressive showing at LFA 80 in January, the rematch was scheduled for the first week of the Contender Series scheduled for June.

This was all before the UFC called on Royval on short-notice for a fight on UFC Vegas 1 against Tim Elliott.

“Once Brandon got the call, I admit that I was salty. I saw him get that opportunity and I knew that it could have been me under different circumstances. But it helped me snap some fire in me and made me even more motivated for this opportunity.” – Jerome Rivera

Not only did the Royval fight fall through, the whole event did due to the global pandemic. The June 23rd event date was postponed and though Rivera was still tentatively scheduled to be part of this upcoming season of the Contender Series, like most things during the global affairs, everything was up in the air without much certainty.

Despite all of that, Rivera was still training – even if it was frowned upon by some or even skirted the gray area of the State health mandate. Unfortunately, Rivera never had the option of staying inside his home, a professional fighter with a fight opportunity still had to stay in shape, be prepared for combat, and ready at a moment’s notice to step up when called upon.

“We had a bit of an underground fight team at the beginning of the lock-down. It was a few of us who would get together as isolated as possible to get work in. It probably blurred the lines but we had no choice. The grind had to continue. We did everything as safe as possible, as much distance, as much precautions, but still doing the hard work day in, and day out.” – Jerome Rivera

Based out of Santa Fe, Rivera has been part of a small team led by his longtime coach Joshua Montoya. The small team out of Northern New Mexico features talents like Josiah Reyes and the team spends a significant amount of time with the Luttrell-Yee gym in Albuquerque where talents like UFC standout Jordan Espinosa really push thresholds for everyone’s improvement.

If all of the obstacles at hand weren’t enough, Rivera took on a small bout during his camp. Not against a foe in the traditional terms, but a sickness.

“My ear started really bothering me and it became really inflamed. I ended up getting it checked and I had shingles. The doctors mentioned it was an interesting case and though it didn’t set me back dramatically it did make for a tense few days unsure of what was going on with my ear and if it was contagious, which would have really interrupted things.” – Jerome Rivera

The shingles for those not familiar is a viral infection that causes a painful rash. With shingles came pain, burning, itching, and blisters that were unpleasant to deal with while navigating training camp. The rash was near the ear which made it dangerously close to the eye, which in many cases can render a person blind.

A battle with a health scare aside, Rivera is read to put a final stamp on this training camp. Tomorrow’s Contender Series bout would be rescheduled for August 4th as part of the first week of this summer’s season. Instead of Royval, it is Rodriguez, instead of June, we are now in August, but at the end of tunnel – the light is still the same.

An opportunity to make it to the UFC, a life-long dream of the 25-year old Flyweight. A young father, a can’t miss prospect, and hard-working local boy from New Mexico will have his name announced on ESPN+ with a shot at the big leagues on the line. Undeterred by the obstacles, Rivera is ready for Tuesday.

“This is my chance to make a difference in both my legacy and in my life. This is the next step for me, to get into the ranks of the UFC where I can work hard to compete against some of the best martial artists in the world. And in doing so, get to start improving life for my family, for my fiance, and for my daughter.” – Jerome Rivera

In Rivera’s way, a top prospect from Mexico who is making a long trip in hopes of spoiling the night for our hometown fighter. Luis “Lazy Boy Rodriguez is a hard-hitter from just south of our border who has left a path of KO’s and TKO’s since turning professional.