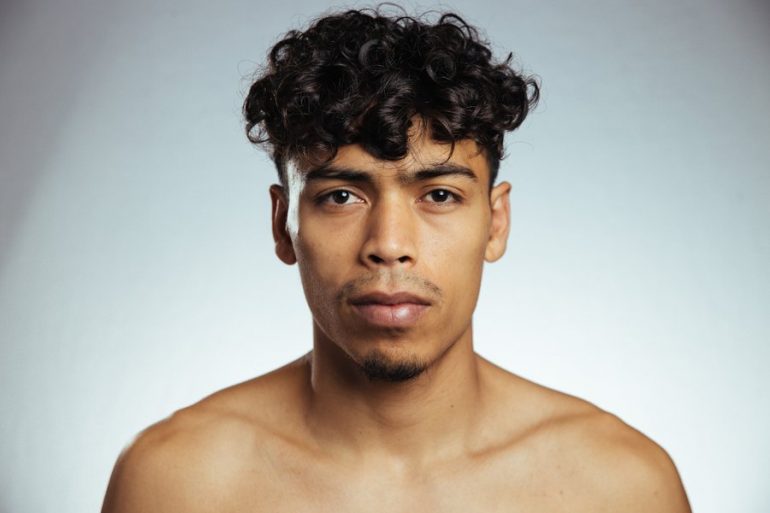 Tonight, he fights for a world championship but at one point in the early part of his boxing journey, Angelo Leo, found himself making his way around drug dealers, prostitutes and roaches.

His reward when he finally made it through the entrance and hallways of the West Hollywood project building that he lived in was to sleep on the floor of a single-room apartment he and his father Miguel shared.

“Living in California was pretty rough; living in an RV– all that was pretty tough,” says Leo, 26, about part of his high school years living in projects and being homeless for a time. “That gave me the drive and want to not be there again.”

Earlier in his life, Leo saw his mother battle with alcohol and drug addiction. This led to his father gaining full custody of him. The process separated Leo from his younger brother at a young age.

Born in Albuquerque, New Mexico, Leo grew up in the South Valley. An unincorporated area in Bernalillo County that does not receive the benefit of city taxes which sees fair share of hardships… and successes.

“Albuquerque, it’s just one of those cities,” says Leo. “There were a lot of gangs and drug use where I grew up. I stayed away from it but it was always there.”

“I always had my dad there to keep me focused and keep me straight,” he says of his father and trainer Miguel Leo. “In Albuquerque, you gotta be tough. It’s not for the faint of heart.”

Right after his sophomore year at Atrisco Heritage High School, Leo and his father packed their bags and headed west to Los Angeles to get the attention of a top promoter.

The two found themselves primarily in the legendary Wild Card Boxing Gym where they received world class sparring. After graduating from Fairfax High School, it would be Leo’s pro debut that brought the pair back to The Land of Enchantment in 2012.

After going 7-0, with 3KOs in his home state on cards where despite often being the most talented fighter on the bill he would find himself lost in the middle of the fight card. Older fighters or even promoters’ sons would end up with co-main and main event bouts.

In the search for respect, the Leo’s would travel to Mexico for 3 more fights, all victories, before packing their bags again and leaving New Mexico for Las Vegas, Nevada in March of 2017. It would be the Mayweather Boxing Club that they would gamble their boxing futures on.

“I got the attention of the staff through my training and sparring,” Leo casually recounts. “It got to Floyd (Mayweather) that a kid from Albuquerque was making some noise in the gym.”

While Mayweather was getting ready for his fight against Conor McGregor, he stayed well after one of his own training sessions to watch Leo. During that session Mayweather got into the ring and began giving Leo advice.

A few weeks later Leo sparred against Super Featherweight world champion Gervonta Davis where he would perform well. After months of patience, it was finally in October of 2017 that he was officially offered a contract with Mayweather Promotions.

After nine successful fights under the promotion’s banner, he will be making his world title fight debut Saturday night against Tramaine Williams for the WBO Junior Featherweight championship.

Leo was originally scheduled to face Stephen Fulton but a positive test for COVID-19 forced the withdrawal of Fulton and promoted Williams from co-main event to main event.

The bout air live on Showtime at 7pmMT. At the time of the article, Leo was a slight underdog at +130. He looks to become just the sixth New Mexican to win a world title.