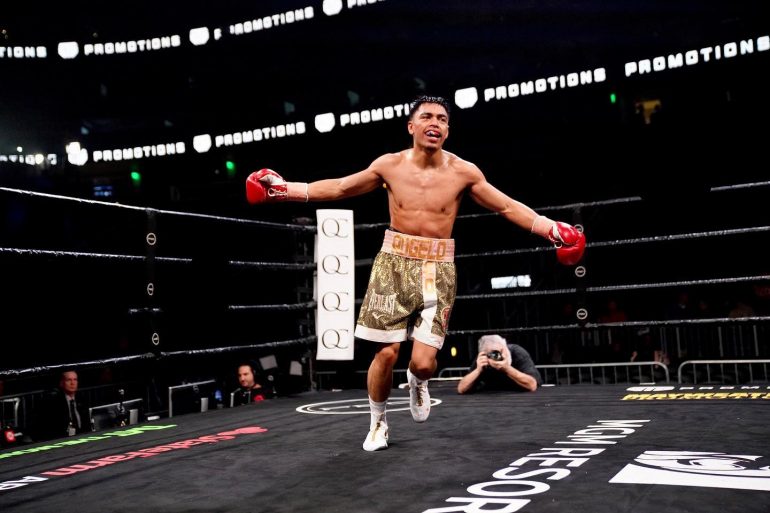 After a four-win and zero loss 2019 campaign against quality competition, Albuquerque native Angelo Leo has won our 2019 New Mexico Boxer of the Year category.

“New Mexico is where I grew up and it feels good to be recognized as the best boxer,” said Leo (19-0, 9KO), who now resides in Las Vegas, Nevada, in a recent phone interview. “I remember when I was 10 and 11-years-old, I always looked at the (NewMexicoBoxing.com) rankings of the top fighters, and now the day has come for my name to be at the top.”

All four of Leo’s bouts in 2019 were consecutively deemed, “the toughest fight of his career”. His opponents last year held a combined record of 83-25-3.

His last performance of the year may have been his most impressive. A grueling 11-round technical knockout victory over a resilient Cesar Juarez (25-8, 19KO), a fighter who had only been stopped once in a 32-fight career by former WBO Super Bantamweight champion Isaac Dogboe in 2018.

In a contest where Leo was expected to use his superior footwork to avoid the advancing fighter, the Duke City native instead stayed in the pocket for the majority of the fight and accepted to settle for the body attack duel.

“I stayed on the inside because I was able to get his timing,” recalls the 25-year-old, Leo. “He was strong but he was slow and I saw everything standing in front of him.

“If I boxed him a lot I knew I might get tired,” he continues. “Staying in the pocket was going to slow him down– he’s used to being the one putting the pressure; we used that strategy because he didn’t like it used on him.”

The victory would earn Leo his first minor belt, the World Boxing Organization NABO Super Bantamweight title. Going into the bout, Leo was ranked in the top 15 of three of the four sanctioning bodies: WBC (#11), IBF (#9), and WBO (#13).

After his December win he will very likely see a rise in his rating and stock when January 2020 rankings for respective organizations are released.

We will see if 2020 will mark the year that Leo becomes the 12th New Mexican to fight for a major world title.

Many, including Ray Flores and Steve Farhood, the Showtime announcers whom commented his fight with Juarez, are calling for a fight between Leo and undefeated WBA Regular Super Bantamweight Brandon Figueroa.

“It’d be a tough fight but I’ve seen a lot of flaws in him. I saw his last fight with Ceja and thought he lost. He does have some (good) traits: he’s awkward, throws a lot of body shots and tries to impose his will.”

“Whether it’s him or someone else,” Leo suggests. “I think I’m definitely getting a world title shot (in 2020) if everything goes well and I’ll become world champion.”

SWFight.com New Mexico Boxer of the Year past recipients:

Where can I bet on the Oscar Valdez vs. Jason Sanchez fight? What are the odds?