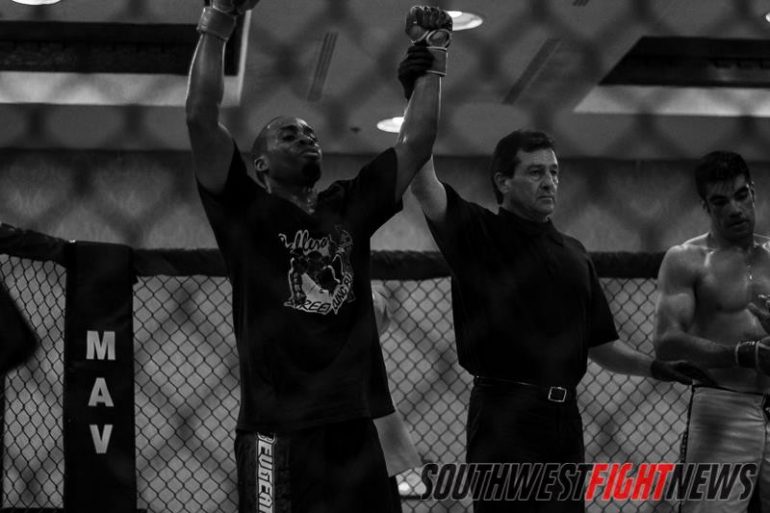 Tomorrow night, the King of the Cage promotion will have their Junior Welterweight World Title contested to headline their “Starbound II” event inside the Santa Ana Star Center. The men competing for the gold can boast unblemished professional careers and are each in a position where a marquee victory could thrust them from up-and-comer to bonafide prospects.

Pictured: Sherwin Price locking in the fight ending omoplata that would secure him the King of the Cage Title
PC: Sherwin Price Facebook – https://www.facebook.com/sherwin.price.35

FIT NHB’s Sherwin Price has flown under the radar amidst an impressive run that has amassed nine victories including his amateur record with all but one of those victories coming via some sort of fight-ending finish. Price’s stock has risen in each of his outings though his recognition arguably lacked behind until he recently won the King of the Cage Junior Welterweight Title.

Back in July, Price (5-0) met up with Jake Adams to contest for the title and as he has shown throughout his career, Price is a skilled and crafty grappler and will impose a smothering and busy offensive attack on the ground often leading to a submission. Adams would gain top control on Price briefly hinting at an advantage only to be caught in the spider web of Price’s guard. Minutes into round three of a scheduled five rounds in the title fight, Price would latch onto an omoplata, a rarely executed submission, to capture the title.

It added to the list of submissions Price can boast of in his career, complimenting a slew of rear-naked chokes and an armbar finishes. A savvy transitional grappler, Price is a danger anytime the fight hits the mats.

Standing across from the cage is Nick Angeloni (3-0) fighting out of California where he has torn through the regional circuit. Price and Angeloni have both fought the duration of their professional careers competing against the best the promotion has to offer in their respective areas.

Angeloni represents Alliance MMA, a renowned gym that is home to so many prominent elite level athletes, and brings into the cage a top-level pedigree of talent that has allowed Angeloni to overwhelm his opponents. Most recently, Angeloni notched a unanimous decision over Jeff Creighton.

The King of the Cage World Title will be up for grabs as the main event of tomorrow night’s “Starbound II” event. The first fight is scheduled to begin at 4:00 pm, tomorrow night, Sunday, December 2nd.

King of the CageKOTCSherwin Price
Previous