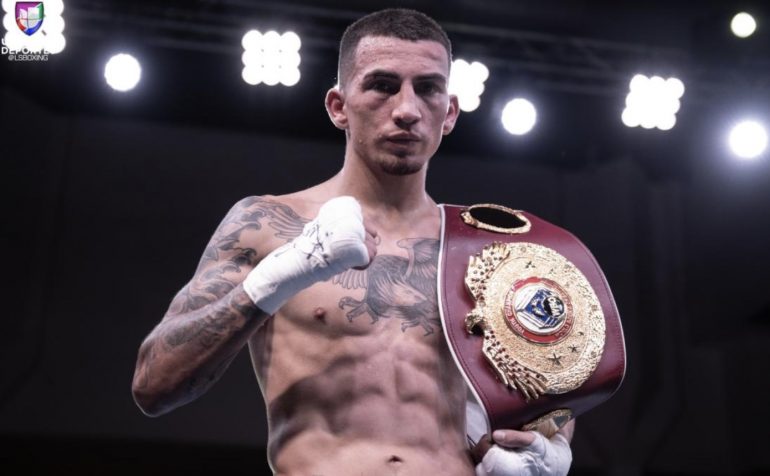 It was a breakout year for Albuquerque, New Mexico boxer Jason Sanchez in 2018. The pinnacle of it came with a convincing unanimous decision victory in Panama this past October over heralded prospect Jean Carlos Rivera of Puerto Rico.

The Top Rank signed, Rivera, came in with a 15-0, 10KO record and was easily the most talented fighter that Sanchez had ever faced. In the bout, Sanchez (13-0, 6KOs) was able to find his distance and outbox Rivera with little difficulty in the second half of the fight on his way to claiming the WBO Youth Featherweight title.

The victory would lead to Sanchez signing a 4-year, 12-fight deal with Top Rank. It would also yield a top 15-ranking the WBO Featherweight world rankings allowing Sanchez to be in line for a potential title shot. The sanctioning body’s current feather champion is Oscar Valdez of Mexico.

In front of his hometown fans this past March at the Route 66 Casino, Sanchez earned a wide unanimous decision victory over 106-fight veteran German Meraz of Mexico. In the months that followed, Sanchez was rumored to be in talks talks undefeated, 2018 Olympic Silver Medalist, Shakur Stevenson. The fight never materialized but the negotiations demonstrated the level of talent that Sanchez is to set to face in the years to come.

Sanchez is currently scheduled to fight January 26 in Amarillo, Texas. An opponent has yet to be named for the date, and while he waits, Sanchez has also been slated to take on Daniel Olea (13-6-2, 5KOs) on February 2, at the at The Ford Center at The Star in Frisco, Texas. The bout is set to take place on the Eleider Alvarez vs. Sergey Kovalev, WBO Light Heavyweight card.