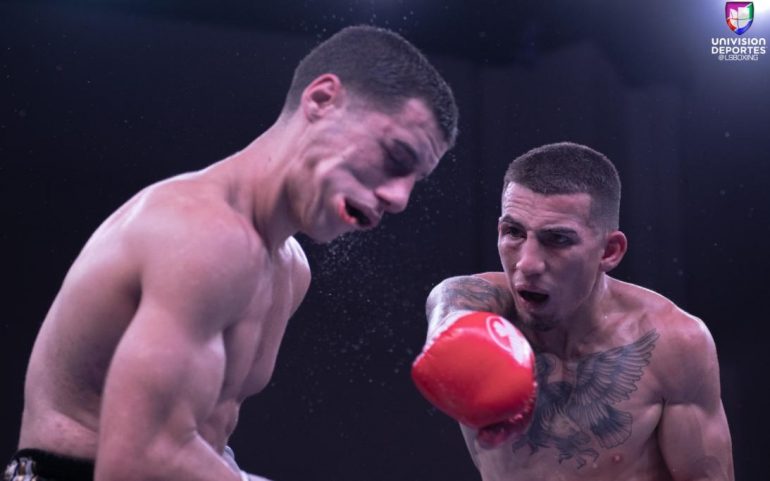 Jason Sanchez lands a right cross on Jean Carlos Rivera in their 10 round fight.

In a battle of undefeated prospects, Albuquerque’s Sanchez gets judges nod over Puerto Rico’s Rivera

(Feature photo credit Lester Silva. Check out more of his incredible photos in his report for Univision.)

With Sanchez (13-0, 6KO) in the first scheduled 10-round fight of his career, and Rivera (15-1, 10KOs) in his second, the early part of the contest saw the men pace themselves the first four rounds.

Rivera’s power punching and accuracy dictated the contest early on in rounds one through three. Sanchez came equipped with volume but initially lacked the precision of his Top Rank-signed counterpart.

The core movement that helped duck many of Sanchez’s power punches early on began to abandon Rivera in the middle rounds. The Puerto Rican prospect who trains at 80-feet above sea level in Orlando, Florida began to tire while Sanchez who trains at 5,300-feet in Albuquerque, found an opportune second wind that would help him sail the rest of the bout.

At the turning point of endurance, in the 8th round, Sanchez was able to establish a rhythm with his jab and found success in hooks and uppercuts that were not there for him before.

A strong flurry at the end of round nine, set the stage for a crescendo final round for Sanchez. Looking to make a final statement with a minute left in the 10th, Sanchez would land a left hook that sent Rivera flailing for balance into the Sanchez red corner.

This would force Maryland referee Kenny Chevalier, who did an excellent job managing the contest, to issue a standing 8-count.

A fight, that Sanchez tried to finish, in the end had him comfortably up on the judge’s scorecards with final tabulations of 96-93, 97-92, 97-92 from two American, and a Hungarian official, respectively.

The victory helps put Sanchez on the national stage and makes him a player in the international featherweight class.