Celebrating 20 Years of FIT NHB: The Success of our Youth Program 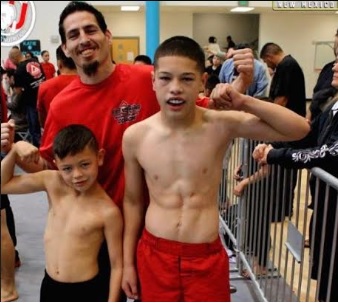 Last month, FIT NHB (Fighters In Training, No Holds Barred) celebrated their twentieth year of existence as a successful entity within the combat sport’s world. Not just a unique acronym, the lauded gym has been quintessential to the development and evolution of mixed martial arts in the State of New Mexico and the Southwest region. 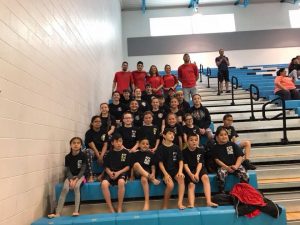 A group photo of the FIT Kids program competing at a local grappling tournament.

Though the event has come-and-go, our series continues on as we approach the finish line of “20 stories” to commemorate 20-years. In today’s feature, we will hone in on one of the most pivotal aspects of the gym of which we have hardly covered to this point – the gym’s youth engagement.

The gym may be known to host a number of fighters ranging from the amateur ranks to the world championship level of MMA, but if you happen to find yourself visiting the gym you will immediately notice how child-friendly the gym is and how close-knit the staff of the gym is with the members of FIT NHB.

“In April of 2007, Rob Monroe and I officially started our FIT Kidz program. Right away the response was good and the classes were full. When Rob moved to Arizona, I brought in one of our pro fighters Gerald Lovato to run the program and the program continued to do well. Gerald moved to California to see his daughter through her last years of high school and two more of our pros Ray Borg and Tim Sosa took over as head instructors.” – Tom Vaughn

A staple of the kid’s program has been centered around the professional fighters who ran it, whether that was Lovato, Borg, or Sosa, the gym’s pro roster has been key in the program’s success over the years.

It was clear that the FIT Kidz program flourished when the gym would post photos on social media showing a large group of participants, many of which had medals depicting their success on the mats that day. The roster of children representing the gym was impressive and within that pool of talented young kids, two stood out from the pack and would become notable in the history of FIT NHB.

“Somewhere during that time Tim Means and I created the teen’s program with Tim leading the charge. The teen program has been a big success. Tim Means eventually took over the whole youth program and we implemented our MMA level system. With the help of Brenda Gonzales-Means and Nicco Montano, the program is reaching new heights. While the entire Youth Program is climbing rank in our system, some have emerged as outstanding competitors. With too many names to mention for fearing I’d leave someone out I will just focus on two of our longtime students who deserve recognition, Sergio and Hondo Gutierrez.” – Tom Vaughn

Sergio and Hondo in a recent photo.

The story of FIT NHB has unfolded over these nineteen chapters and has laid out a number of common themes that a reader can find in almost each story. One of those themes – toughness – is showcased by Sergio and Hondo. If you spend enough time around the gym you’ll either catch a glimpse of the two training or hear of their lore inside the gym.

The gym has always offered a well-rounded and diverse menu of disciplines to train in ranging from Muay Thai to wrestling, and Jiu Jitsu to boxing. The gym has hosted countless exhibition events and smokers, participated in MMA events big and small, and through all of that the Gutierrez brothers has experienced more of the fight world than most adults competing in the professional ranks.

“The Gutierrez bros were 5 and 8-years old when they started in our program. Sergio who was 5 then, is now 13, and Hondo who was 8 will be 17 in July. It’s been amazing to watch the Gutierrez boys grow and become more and more skilled. While Sergio hasn’t quite accumulated the accolades his brother Hondo has, he has competed in all aspects of MMA against the toughest kids around. Sergio wrestles, boxes, kickboxes, and grapples. Whether he wins or not he always makes a good showing. Sergio is young and we have no doubt he will hit his stride in the future.” – Tom Vaughn

The sport of Jiu Jitsu and in a lesser extend striking sports has blown up in terms of participation in the youth age ranges over the years. Grappling tournaments are packed with children ages five to twelve, and even teenagers, as well as smokers and kickboxing exhibitions. Almost every martial arts gym offers a kid’s program of sorts, and every gym has a slew of talented young kids, but not many can share a similar story that Tom can about one of the toughest kids you will ever hear about.

“Hondo Gutiuerrez is a living miracle. When he was 9 years old he was accidentally shot in the midsection with a .45 caliber handgun grazing his liver and pancreas. Somehow Hondo survived the shooting and made an amazingly quick recovery. The doctor recommended standard rehabilitation but Hondo was determined to get back to martial arts training as soon as possible. The doctor allowed MMA to be Hondo’s rehab and it seemed like no time at all Hondo was back in action. Since then Hondo, like his younger brother Sergio, competes in all disciplines. Hondo holds a title in kickboxing, he is a 2x NAGA Champion, and is a 6A State runner-up in wrestling. Hondo is the highest ranking teen in our MMA level system, helps with the youth program, and also trains with the FIT NHB Wildbunch professional fight team.” – Tom Vaughn 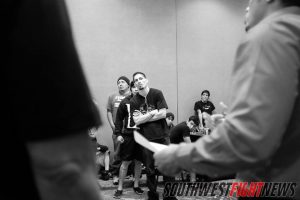 A fighter himself, Sergio pictured during a fighter’s meeting behind the scenes at a local MMA event.

Too often stories like that end in much more tragic manners, but despite the unsettling and unfortunate event in Hondo’s life, he has become one of the most important figures in FIT NHB’s ranks. As an inspiration and staple of toughness and determination, Hondo plays a role of mentor to the kid’s program and also contributes his talents to the professional ranks who can benefit from his energy, ambition, and hunger to continue improving.

The story of Hondo is an amazing example of how martial arts can benefit anyone, any age, and for whatever the reason – the discipline, hard-work, and the grind, are all traits that martial arts enhances and can be applied to in any life situation. The presence of youth programs are imperative for all gyms and sports alike, and FIT NHB’s success with FIT Kids extents past Hondo and Sergio positively impacting the youth who have walked through the gym’s doors.

No matter how crucial a gym and coaches can be to the children, you cannot replace a parent’s influence and thankfully for the Gutierrez brothers, they have that support in full force.

“I won’t venture a prediction for the future, I’ll just say the sky is the limit for both Sergio and Hondo Gutierrez. If they choose to continue competing they will be at the top of the game. The boys have the undying support of their parents Anna and Sergio Gutierrez who also both train at our gym. Their dad Sergio has also competed and he is one of the main reasons the boys are so tough. Serg is what I call “New Mexico tough”. He will fight at the drop of a hat, fight until he can’t fight anymore, and then do two more rounds after that. Sergio is also an assistant coach in our youth program. Anna is the kind of mom that everyone should have. Her family is her highest priority and she is there for them always. We feel privileged to have the Gutierrez family at our gym for all these years and I think Sergio and Hondo will be successful at whatever they choose to do in life.” – Tom Vaughn