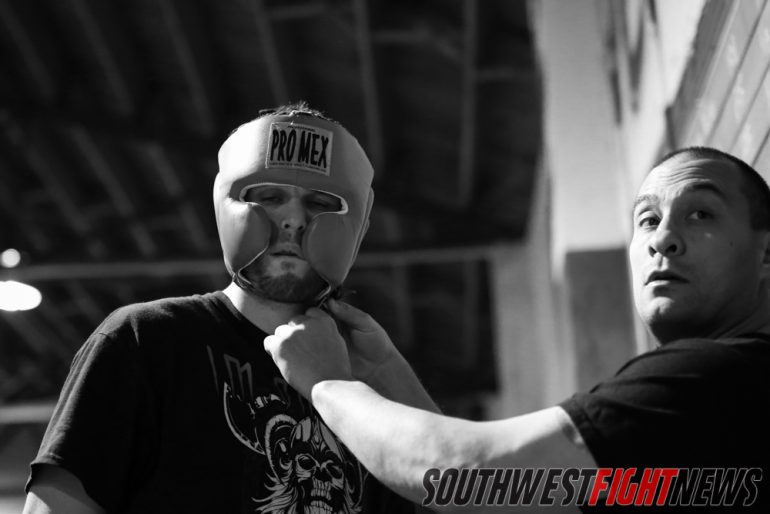 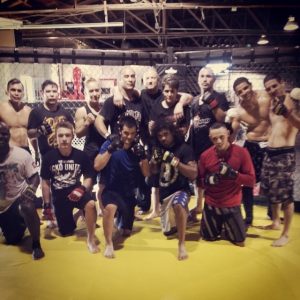 Pictured: Jon, Tom, and Arlene with some of our fight team after practice around 2012. We are sure some keen fight fans will recognize quite a few in the photo.

Most of you following this series should notice a very significant omission from the content we have promoted to this point. When one considers the FIT NHB gym it is easy to associate that with individuals such as Tom and Arlene, maybe Tim Means, nowadays Nicco Montano – but also amid that group is one individual easily recognized in the fight scene, Jon Judy.

But Jon wasn’t always the coach of the fight team, in fact Tom met Jon much earlier than that.

“Shortly after we opened our current location in 2004, a guy walked into the gym just as I was about to close the gym for my lunch break. He was dressed kinda business-like but also looked to be in good shape. I don’t always remember people the first time I meet them but I remember the day I met Jon Judy. I showed him around, we talked a bit, and right away I liked him. Jon told me a bit about his background (including his wrestling background) and he had a certain charisma and confidence. I am a little hazy on how we got to the next phase so quickly but it seemed like in no time he was training with our competition team and competing shortly thereafter.” – Tom Vaughn

Not only would you recognize Jon Judy as one of the coaches at FIT NHB, but a main figure in the promotion of King of the Cage in this area. In the beginning though he was a competitor looking for a gym to train at and Tom’s early memories are consistent with the man today, still dresses “business-like” and still carries himself with strong charisma and confidence.

If you speak to athletes who have trained at FIT NHB as well at other locations, many will attest to how solid his wrestling chops are and praise his talents as a coach. Those praises can likely be attributed to how successful and talented Jon was as a competitor.

“Jon Judy blew through his first Grappler’s Quest winning a gold medal without much problem. That progressed into amateur MMA where he continued to do well and won most of his fights. He dropped his pro debut in North Carolina to a very formidable opponent and then he went thru a series of life changes that took him away from competition. One of those changes included becoming the wrestling coach for our fight team. As well as being a strong competitor Jon proved to be a very good wrestling coach. Jon had coached previously and his wrestling knowledge is organized and solid. It was the perfect compliment to our MMA program. The new FIT NHB coaching formula became the combination of JJ, Arlene, and I, and our product is among the elite worldwide.” – Tom Vaughn

The trio of coaches are definitely among the elite worldwide – making the walk with UFC Champions, UFC contenders, Invicta contenders, King of the Cage Champions, and that is to name a few of the talented fighters on the roster.

With one glance, it is easy to see the connection between the three coaches. They radiate comfort and experience, but also promote toughness and function with a mostly stoic demeanor. They are an impressive team that has successful managed and trained fighters, promoted shows in the forms of smokers, and amateur/professional MMA. In that, Jon has played an integral role to aid Tom and Arlene’s endeavors.

“Though it is his primary function Jon Judy is much more than a wrestling coach . Jon is multi-talented and one of the smartest most resourceful people I’ve ever known . He’s also funny as hell . Over the years Jon has become a combination of a brother and best friend . Together Jon , Arlene and I have have built fighters , managed fighters , promoted fight events , and pretty much everything in between . Through all our ups and downs (personally and professional ) we always stuck it out which means a lot . Everyone is cool when things are good but it takes real character to keep it together when times are hard . Looking back it’s the hard times that made us closer and got us through.” – Tom Vaughn