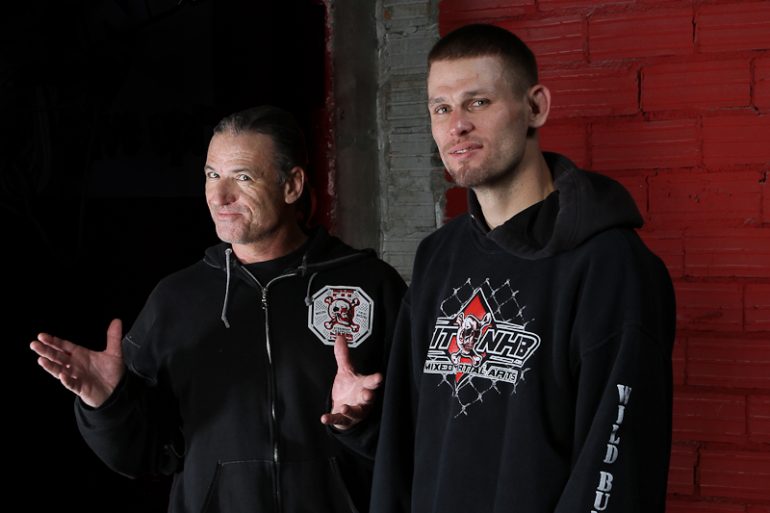 Today is the day – May 19th, FIT NHB (Fighters In Training, No Holds Barred) celebrates their twentieth year of existence as an entity within the combat sport’s world. Not just a unique acronym, the lauded gym has been quintessential to the development and evolution of mixed martial arts in the State of New Mexico and the Southwest region.

Tom Vaughn spent quite a bit of his content to commemorate individuals and show his appreciation for all the success he has experienced along the path. I felt it would be fair to turn the tables a bit and allow some of his most notable athletes to commemorate he and Arlene with their own stories and memories from their experiences being coached by the duo at FIT NHB.

On Coach Arlene:
“I first met Arlene in 2009 when I first stepped foot in the gym. I remember being very nervous, because I had never boxed or really thrown a punch period. She was teaching class which made it a little easier to jump in and try it out, because she was a female. I’d played sports all my life and been in the weight room, but the workout she put us through was like no other! She was up front from the get go and always had a military tone to her. I was hooked, challenged, and wanted more and more!

I’ve gotten to travel the world seeing close to 30 different places with her. I love how strong-willed Ar is, she definitely has made me dig deep in finding confidence in myself. No one has ever made fun of me or pointed out my mistakes more than she has!! Getting a compliment from Arlene on your fighting is one of the best things you could ever hear, ask ANY of my teammates. It’s an honor to have had her in my corner for all 17 of my pro fights. We have definitely shared lots of stories and laughs and have built a good relationship.

I’ll never forget when we were on the bus in Japan, I had dislocated my elbow and she was sitting next to me. We were sight-seeing and every time she saw something cool she would nudge me right on my arm and I would moan in pain. I think she did it about 4 times forgetting each time. We were both in tears at the time, but for different reasons! I could go on and on about some good times, but we ain’t got time for that. We still have some more road trips the future and more memories to make. Thank you Arlene for all these years, and all the hours you have put into myself and others!!”

On Coach Tom:
“Tom has always had that intimidating look to him, I don’t know why but he does. He has always been upfront and I like that about him. I see TV put countless hours into his fighters and he will make sure you are beyond ready when you step foot in the cage. I’ve gotten to see a very soft side of Tom and a side that you wanna stay away from. He is a great coach and I am blessed and happy that I came thru FIT’s doors 9 years ago and always believed in them. I know that he will back his fighter’s 100%. I’ve gotten to do quite a few trips with him also. Tom has always believed in me and has given me pep talks when needed. Thank you Sleeve Killer for all that you have done for us!!”

A notable memory:
I was pretending to throw a super man punch on Tom when we were all just standing there and it landed right on his jaw. It was all slow motion but I didn’t know what to say or do when it landed! I was just happy he laughed about it after the fact”

“One of the stories I have of Tom was in my early days, maybe first week I was at the gym. I worked security for him and Arlene. There was an altercation out in front of one of the night clubs and I was trying to detain a grown man while I was still a teen. Well, a fist fight kicks off and I am in the middle of street fighting, and this guy and I are wrestling around and I land on top of him, and during this struggle I look up and Tom is down on the ground next to us with his face right down by mine instructing me what to do. I knew right then and there this was the team I wanted to have my back. Also, in my lowest of times calling from jail Tom would answer my phone calls. It’s a humbling experience when you are praying for some one to answer. Always wanted to tell Tom thank you for that and just how much it meant to me.”

“There is 1-thing I know about Tom and Ar, they’re 2 of the hardest working people in all of MMA and they are true martial artists themselves. They’re amazing humans and I’m forever grateful to have come across them and the FIT NHB familia. It’s not always an easy road but they still put out high level competitors and champions year after year! That goes to show you the work they put in year after year.”

“Tom and Arlene are both great coaches and mentors. I love them both. My favorite times with Tom were when I was training to fight Catherine Costigan and I would sometimes have to miss practice because of work and we would have late night practices with my brother Austin, drilling, sparring, getting ready for my fight. It was just us in the gym and it was a cool time. TV is awesome! Arlene is always fun. The best times I had with Arlene were when we went to Japan together. It was amazing and I got to experience it with her twice and Brenda once. Both times were amazing! Any time with Tom and Arlene is great, whether it be at a fight, during a fight camp, or just being at the gym all together. It is always a good time.”

Pictured: From an earlier entry in this series well worth a re-visit. Tom and Arlene with their daughter, Jessie.

On Coach Arlene:
“My memory of Arlene starts off with Brenda Gonzalez Means. She was getting ready for a title fight if I remember correctly. There we were sparring everything going good. Just like that I get caught with a double knee, the first one I blocked but I wasn’t so lucky on the second one.  Just than she looks at me and asked if my nose always looked that way? So I ran to my husband and asked if it looked okay, he said yes but the way he said it and the expression on his face told me different. So I go to Coach Arlene and asked if she thought it was broken. She said as casual as can be, “Yeah, its broken. Take a deep breath and on 3 I’m going to set it back(pull it)”. So I take a deep breath in, she starts to count 1.. 2.. we didn’t make it to 3. She had set it perfectly and I have a feeling she’s had some experience in that department before.”

On Coach Tom:
“When I was just an amateur I had taken a short notice fight and had to fly for the first time within a day I believe. It was just Tom and I who had went, and it was all the way up in Wisconsin. You can say it was a long ways from home but it was a great opportunity and full of a lot of new experiences for me. I remember the talks prior and after the fight. At that moment I knew I had the right person in my corner that actually cares and has my back. That’s a great quality to have in a person and coach.

He’s always reminding his fighters of our potential and what we can accomplish if we work hard. Of course every coach wants their fighters to win but he’s always proud of us win or lose as long as we gave it our best. I am truly grateful to be one of his students. Tom is a great person but don’t ever take his kindness for weakness, anyone who knows Tom knows he’s a legit badass!”
Check out the entire series of “Celebrating 20 Years of FIT NHB” by Clicking Here.
FIT NHBMMA
Previous