Celebrating 20 Years of FIT NHB: King of the Cage

We hope you followed us these last two weeks to keep up with all of this great content and if you haven’t we have listed the links at the end of the page for all the previous entries of this celebration series. 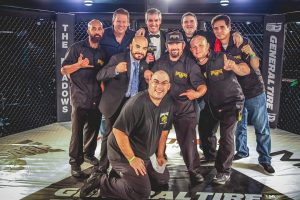 Tom Vaughn’s successful MMA gym has seen transcendent opportunities mold their gym. Whether it was the development of Fight World, the local and international success of Carlos Condit, or finding the gym’s 3rd location that gave the fight team an enormous warehouse to call “home” – the gym has had pivotal moments shape the overall foundation of where the gym started and continues to where FIT NHB stands today.

Fight opportunities can be rare in the fight game, especially when you come from a small market or even a heavily saturated market. It has been shown throughout MMA’s lifespan that a fighter can see their career be made or broken based on the opportunities they find on the grind up the ranks.

For FIT NHB, the successful King of the Cage promotion has long provided a platform for the roster of FIT NHB to get in experience from all levels of competition; from amateurs to professional, undefeated fighters to fighters trying to get back on track, King of the Cage has been a promotion for first-and-only time fighters to top-level fighters who made their mark at the top levels of MMA.

King of the Cage is considered one of the longest running MMA shows in history and in that same breathe, one of the most successful. Many promotions ceased to exist after the recession of 2008, and even more have come-and-go for an array of different reasons. King of the Cage has consistently promoted shows around the Country since the days of Urijah Faber and Diego Sanchez and have promoted athletes like Nicco Montano, Tim Means, and even Daniel Cormier before they made their debuts in the UFC.

“By 2007 our fight team and fight promotions were growing exponentially. We were making good moves and at the mercy of no one. Years earlier when King of the Cage failed to meet the growing needs of our team, we created Fightworld MMA and made things happen ourselves. We were traveling all over with our fighters and filling venues at home in between. It had been quite a while since KOTC had done a show in New Mexico when I heard they were planning to come back. I got a call from KOTC owner Terry Trebilcock offering to feature some of our fighters on their upcoming show in Albquuerque. I told him it would depend on who was running the show and he said he was hoping I would run it. Once we discussed the details I was happy to accept the position. This started another game-changing relationship for FIT NHB and I. We started promoting KOTC here in Albuquerque but it soon progressed to the entire southwest region including New Mexico, Texas, Arizona, Colorado, and Oklahoma. We were building a lot of fighters and doing shows in some very cool venues all over the southwest. I pulled Jon Judy in as my right hand man and we were very busy guys.” – Tom Vaughn

Pretty much anyone who is anyone throughout the long history of New Mexico has come across Tom Vaughn at some point in their career. A huge contributing factor is that the King of the Cage promotion has promoted fighters in the southwest region regardless of gym affiliation, coaching staff, point in their career, or fighting style. If you look far back enough in a fighter’s resume, there is a solid chance you will see a King of the Cage event. 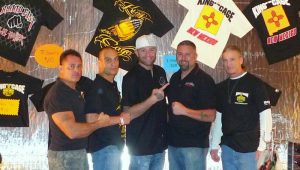 FIT NHB’s roster of fighters will definitely see at least a couple of King of the Cage events in their record because their coaching staff, and in a lot of instances their managers, Tom and Jon Judy, also served as promoters. It was a great partnership that allowed the FIT NHB to constantly have fight opportunities for their fighters.

“We were no longer local MMA promoters. We became regional promoters working with one of the longest running MMA promotions in the world with a nationally televised deal. In 2016, I got a promotion making me the matchmaker for KOTC Midwest and East Coast shows as well as the shows we already had in the southwest. Life got a little crazy at times but things are good.” – Tom Vaughn

With opportunity often comes a busy schedule, and Tom experienced that first hand when joining forces with King of the Cage. His affiliation with KOTC has evolved over the years but he has found stability in one of the most-grounded and consistent fight promotions in combat sports, period.

“Currently, we are still working with King of the Cage and growing the brand. It is an honor to work alongside the KOTC staff with production that is second to none. Terry Trebilcock created a powerhouse organization that is not only national but international. So few shows can say that. The KOTC library is vast and contains most of the biggest stars in MMA. After hundreds of shows I think it’s safe to say, at this point, more big league fighters fought in King of the Cage than any other organization.” – Tom Vaughn