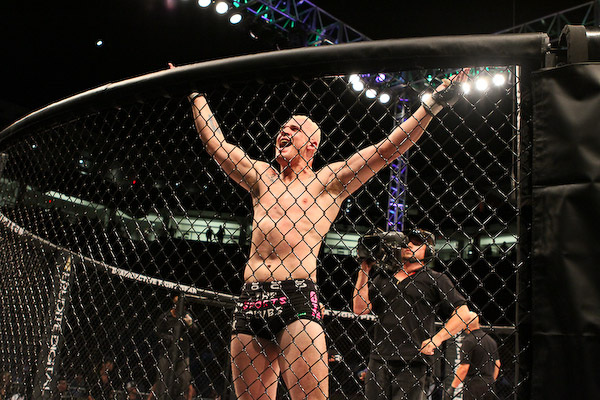 This past weekend, FIT NHB (Fighters In Training, No Holds Barred) celebrated their twentieth year of existence as an entity within the combat sport’s world. Not just a unique acronym, the lauded gym has been quintessential to the development and evolution of mixed martial arts in the State of New Mexico and the Southwest region.

Though the event has come-and-go, our series continues on as we approach the finish line of “20 stories” to commemorate 20-years. In today’s feature, we will get to one of the wildest stories you have ever heard and definitely a deep insider’s look behind the scenes at one of the combat sports world’s most well-known gyms. Today’s feature will be narrated by one of the Head Coaches, Jon Judy.

As one would expect, a combat gym will yield loads of testosterone and intensity, and that can often lead to confrontations that come in many different forms. Often it is verbal outbursts, other times it can be physical – luckily, in a combat gym, most problems can be handled easily in a protected training environment.

But other times, it crosses that threshold by a mile.

“Like all gyms, we’ve experienced some crazy moments over the years.  From people walking in off the streets still wearing their Bernalillo County Jail bracelets and challenging fighters to fights, to having an individual who was high on meth break in from the rooftop only to find himself trapped inside the gym until it opened the next mornin’, incidentally the one opening the gym that morning was Tim Means, who immediately escorted him out of the building. But one particular incident tends to stand out above all the others… the day Charles Bennett, or “Krazy Horse” as he was know then had an altercation during practice with Tyler “the Beast” East.” – Coach Jon Judy

In order to  properly prepare the context as you read this story, Charles Bennett, a.k.a. “Krazy Horse”, a.k.a “Felony”, is a storied figure in the world of MMA. His legacy may not grace the halls of the MMA Hall of Fame, but his infamy will be endless in the form of notoriously viral moments throughout his career. He started his fight career in the late 90’s, and has fought well over seventy times over the course of about 20-years.

But he is a 145-pound Featherweight who has fought in-or-around that weight class and has fought notable athletes like Urijah Faber, Duane Ludwig, and Drew Fickett. He also infamously fought Wanderlei Silva in the backstage of a Pride FC event.

Tyler East on the other hand is a massive heavyweight. He may not max out the 265-pound scale, but you wouldn’t know that by looking at the imposing physique. East has the look of what you’d expect a prototype fighter to look like, and he has racked up a 15-4 record capturing KOTC Gold along the way.

“Back in January of 2010, practice started out like any other day, the class warmed up, everyone geared up and it was time to do some shootbox sparring.  If I remember correctly, it was probably about 20-24 competitors in class that day with the majority of us on the mat and Coach Ar running the session.  Normally, our competitors understand the importance of controlled sparring and how to keep there cool when things get heated during sparring.  I was in class that day sparring with the guys and everything was going smoothly as usual until suddenly during our 3rd or 4th round of sparring, I looked out the corner of my eye and saw Krazy Horse go flying by me and in pursuit of him was Tyler East. This coupled with some inaudible yelling, brought everyone on the mat at the time to a hault mid-round. Now keep in mind, Charles fights mostly at 145 and Tyler, well Tyler was a big boy listed at around 6’5 230/240.  As I turned around to see WTF was going on, I saw Charles on the ground and Tyler had him held down and was unloading a few blows from on top before finally separating from Charles. We immediately separated them to give them time to cool off and redirected everyone to get back to sparring. Immediately after Tyler let Charles up, a few words were exchanged and Horse walked, quite calmly to the locker room and Tyler went across the gym by the ring to gather himself.” – Coach Jon Judy

At this point in the altercation, other than the size discrepancy, there was probably not much out of the ordinary than any other gym experiencing a scuffle among competitors. Sometimes fighters get heated, a shot lands harder than desired, emotions and physicality prevail and two fighters get to it.

It wasn’t so simple on this day for Coach Jon Judy.

“Having known Tyler since his high school wrestling days I had a pretty good rapport with him and we always had a mutual respect for each other and got along pretty good, so that being the case I grabbed him for the next round of sparring to give him a little more time to cool off, plus I knew he would go easy on the old wrestling coach while we were sparring. We had a fun round and he calmed down and was very relaxed after the round. We both took a knee after the round as we waited for the next round to begin, it should be noted that both of us had our backs to the front door. At some point during our minute rest, I looked up at the ring where Donald Sanchez had been sparring with I believe Nate Torrez at the time and I could see Donald waving his arms and trying to say something, but I couldn’t quite make out what he was yelling to me because he had his headgear on, and mouthpiece of course, and the music was pretty loud. I remember thinking “what the hell’s wrong with D?”, no sooner did that thought cross my mind and I hear Tyler screaming and then subsequently roll across our entire gym floor and grasping his knee and yelling in pain. I looked up and there was Krazy Horse, holding some type of steel bar or steel pipe in his hand. At this point he started, again quite calmly, walking back towards the stairs and I told him he had to go and Donald and Nate came running out of the ring and helped escort him out the front door and locked him out as we tended to Tyler and called the ambulance because they were some pretty serious blows and Tyler was in a great deal pain.” – Coach Jon Judy

The incident went from typical to chaos as the confrontation minutes prior had now turned a very dangerous curve as the 145-pound fighter had found his equalizer to the fighter near double his size in the form of a steel weapon.

“After the dust had settled, we later figured out what happened. Apparently during the initial sparring between Krazy Horse and Tyler, Tyler felt Charles was going way to hard and taking some cheap shots and that’s what sparked his response. Well, after they were separated, apparently Charles calmly walked to the locker room and changed clothes, went into the parking lot and decided he needed to respond. And that he did.” – Coach Jon Judy

For the sake of your MMA entertainment, please take some time to YouTube “Best Krazy Horse Moments”, and watch a few videos. You’re welcome.

“Felony” Charles Bennett once lifted up a fighter while inside an inverted triangle, walked to the nearest cageside camera, threw the piece sign, and proceeded to spin in place and violently flung his foe into the cage. Words do it no justice, it is a must-see moment albeit choppy video feed.

“After he had been locked outside by D and Nate, I remember him simply standing outside calmly even after Donald had said something to the effect of “You better go, the cops are coming!”.  Charles simply didn’t care, it didn’t faze him one bit. Later on Tom said he was pulling up to the gym, not knowing what happened, and Krazy Horse was walking across to Burger King and just waived at him. About 10 mins later the EMS and Cops showed up and Horse was sitting up front waiting for them.” – Coach Jon Judy

With the ferocity of which Bennett attacked East, it probably surprised all those in attendance that he would willingly offer himself to authorities so easily. Despite being part of some of the craziest moments in MMA, he gave up at least 100-pounds on East and while that may cause concern for his safety, when he brought the weapon into the situation he had crossed a line he couldn’t cross back from.

“Charles was arrested and the story broke on Bloody Elbow the next morning. He spent sometime in jail and was eventually released. I’m unsure about if charges were pursued or just dropped, but that certainly was one of the craziest moments at FIT.  Fortunately, Tyler had an amazing capacity to heal from injuries and he was out only a short period of time after the incident before he was back in action.” – Coach Jon Judy

With East’s health in the forefront of importance, the situation could have been far worse. East was out for a short amount of time and would continue his success in his MMA career.

The intrigue of the story is only added by the fact that Bennett lived with Coach Jon Judy. This added another wrinkle in the story being that his perspective was not only as a Coach, but also as roommate. Coach Jon Judy had the best vantage point from all perspectives for FIT NHB’s Craziest Moment.

“At the time, Charles had been living with me and after he was released, I remember asking him what he was thinking and he responded with something to the effect of “Coach, I’m from the streets, I grew up on the streets.  Tyler is a big dude and could have killed me, so I had to get my respect back.”, he also went on to say “You know I hit him in the knee. I could have hit him in the head.”. Point taken.” – Coach Jon Judy

Celebrating 20 Years of FIT NHB: The Success of our Youth Program