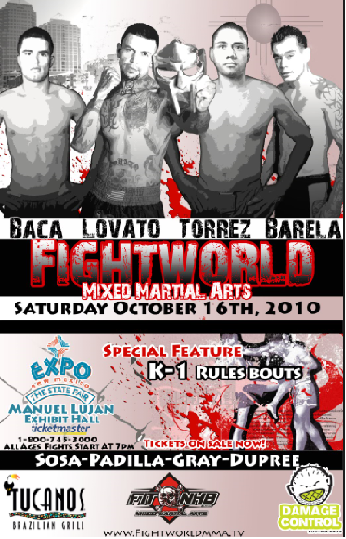 Most fight fans will associate FIT NHB and King of the Cage together because of Tom and Jon Judy’s roles for KOTC and how the gym has found a stomping grounds from amateurs to professionals competing for the promotion. You would have to be a real history buff or been in the game for a while though to know that before King of the Cage – Tom had “Fightworld”.

“2004, things were really starting to pop for us. We had a new gym and our team was growing. What was sub par in my opinion was the local fight scene. Our security team (V Team Security) had the house account at the Sunshine Theater, and the owner Thomas Brackeen approached me about creating our own show and hosting it at the Sunshine Theater.” – Tom Vaughn

At this point, Tom had already traveled around the world so he was able to experience promotions good and bad, simple and elaborate, in all different areas. That invaluable experience on top of the experience he had gained keeping the gym afloat would lead him into the world (excuse the pun) of fight promotion to get Fightworld off of the ground.
But first, Tom and the new promotion would need the most iconic part of any fight night – a cage.

“I thought it was a great idea so we began looking for a cage. In those days cages weren’t nearly as common as they are now. We found one for sale in California so Thomas Brackeen and I went there to check it out. It was an early cage design by a company called Masterbuilt and the design wasn’t the best but we didn’t have another option. The cage had been used a few times for events and had also been in the movie “The Punisher”. We settled on a price and made a deal for the guy to deliver it to our gym and set it up . Now we had a cage for the gym that doubled as a cage for the show so we had the best of both worlds.” – Tom Vaughn 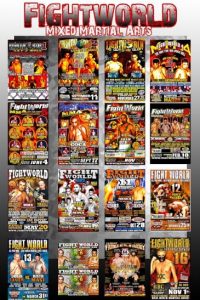 Pictured: Poster of the fight events under the Fightworld banner.

With a cage in his possession, Tom had now made the next step in fight promotion but also equipped his gym with a new toy to help his fight team improve.

Tom was right about the fight scene and ironically still today the local scene struggles to maintain momentum and scales through ups-and-downs year after year. With a growing stable of fighters though, Tom could use the company two-fold to revitalize the fight scene but also saturate his team with fight opportunities.

“I named the show Fightworld MMA. At the time the name was original. Since then its been used by others. Our first show was set for June 5, 2004. The main event was Tim Means vs Noah Thomas from Colorado. Somehow the database misprinted Noah Thomas as the winner but the truth is Tim completely dismantled Thomas and won by unanimous decision. John Dodson was also on that show in what may have been one of his first fights , The event was completely packed from top to bottom and the fights were great. Thomas Brackeen and I added Sammy Sierra as our partner in FWMMA and we immediately started working on our next shows. All in all we did 17 Fightworld shows. Most of them at the Sunshine Theater but we also did shows at the Paolo Soleri in Santa Fe, the Albuquerque Convention Center, and Route 66 Casino. We featured the best fighters from FIT NHB and others from the area, several of whom went on to become recognizable names.” – Tom Vaughn

As Tom mentioned, Tim Means was part of the inaugural event and in fact, it was his first amateur MMA bout on his official record. Among the other notables, Carlos Condit, Carlo Prater (who fought Condit at one event), OX Wheeler, Gerald Lovato, and Donald Sanchez among dozen of other notable fighters.
The promotion should also get extra points for having one of the best event names ever – as Fightworld promoted two shows on consecutive nights called “Cinco de Whoop Ass” back in 2007.

“When we began promoting MMA in New Mexico there was no MMA commission. I believe our success prompted the NMAC to take an interest in mixed martial arts and after a few shows the NM commission began regulating MMA. My associates and I are the longest running MMA promoters in NM and we have promoted more shows here than anyone else. We are proud to be rooted in the MMA culture of this highly respected region.” – Tom Vaughn

You cannot argue Tom’s longevity as he is truly the most successful and longest lasting promoter in the State. Each year it seems a new promotion comes along and tries to make a name but Tom has remained a staple in helping the fight scene move forward. As a promoter and coach, as well as an iconic figure in the combat sports community, Tom has definitely made a lasting impact and has been a pivotal figure in where the fight game is today.