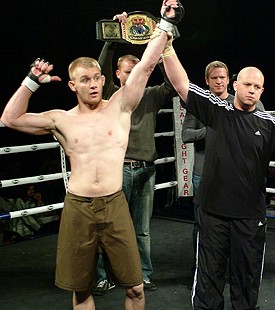 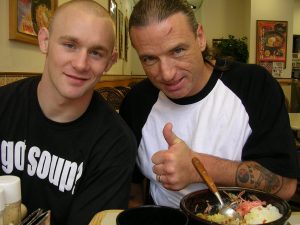 The story of Tom throughout this 20th celebration series has given readers an insider’s glimpse into a historical context of how FIT NHB was built from the ground up with stops along the ways detailing any and everything from Tom’s daughter to FIT NHB’s first breakout fighter – Carlos Condit. 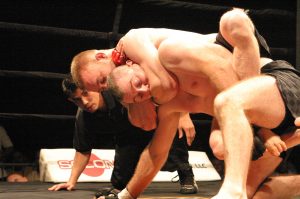 Pictured: Thomas Schulte locking in a rear-naked choke, a submission the grappling ace locked in many times.

Every gym has that fighter who has all the intangibles and all the natural talent, and in theory should be a superstar but flies under the radar despite success and often is left only recognized when the legendary stories of the good ol’ days are told. The fighter Tom details in today’s celebration entry fits that criteria in my opinion – has the resume, the talent, the experience, etc – but I don’t consider him to be well-known in the fight scene. He definitely comes up in the discussions about some of the best fighters to lace on the gloves.

“Thomas Schulte joined our team in 2004, fought 22 pro fights under our banner, and was with us for 13 years. Among the organizations Thomas fought for were Rage in the Cage, Gladiator Challenge, King of the Cage, Fightworld,  Ring of Fire, Ultimate Warrior Challenge, WEC, Pancrase, TKO, Hardcore Championship Fighting, and Bellator.” – Tom Vaughn

Schulte was a lightweight who compiled a record of 20-11 in his 14-year career. Impressively, he won nineteen of his twenty victories via submission making him extremely dangerous as soon as fights hit the mat. Schulte managed to notch wins via rear-naked choke, triangle choke, anaconda choke, and armbar and in many of the those fights, he finished opponents inside of the first round. 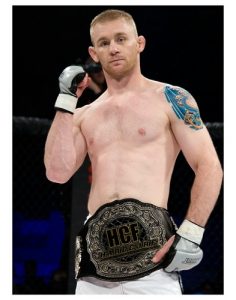 Basically, he didn’t spend alot of time inside the cage once the fight started.

“I would say Thomas Schulte is the slickest finisher we’ve ever had. He had a way of making things look easy and he put opponents away in spectacular fashion. Most fighters can only dream of a highlight reel like Thomas’.
We went all over the U.S. and abroad and Thomas was one of my very favorite fighters to travel with. He has a great sense of humor and was always entertaining. I kinda thought of Thomas as a little brother. We had a certain closeness and trust between us. We called ourselves T-1 and T-2.” – Tom Vaughn

If you can find a common theme in most of Tom’s storytelling, one conclusion can be pointed to Tom developing close relationships along the way. It may have started with Arlene, moved on to Condit and promotions, his daughter, and now Schulte. That closeness that comes with developing these relationships yielded success as well as promoted unity as the FIT NHB team and gym continued to grow and earn their great potential.

“Thomas Schulte won titles in KOTC, Ring of Fire, Hardcore Championship Fighting, and was one of the very  first 155 lb fighters to be signed to Bellator’s season one tournament which was a big deal.” – Tom Vaughn

Tom watched Schulte tear through the fight scene no matter where they traveled. In two of the aforementioned title fights, Schulte won titles in 50-seconds and 75-seconds respectively.

“Always among the elite fighters in MMA, Thomas never got his UFC shot. The timing just didn’t work out. Nevertheless he had an extraordinary fight career that anyone would be proud of. Thomas Schulte is now married, living in Austin, TX, and is about to be a dad. No doubt this child will be like his/her father, UNIQUE AND AMAZING!” – Tom Vaughn