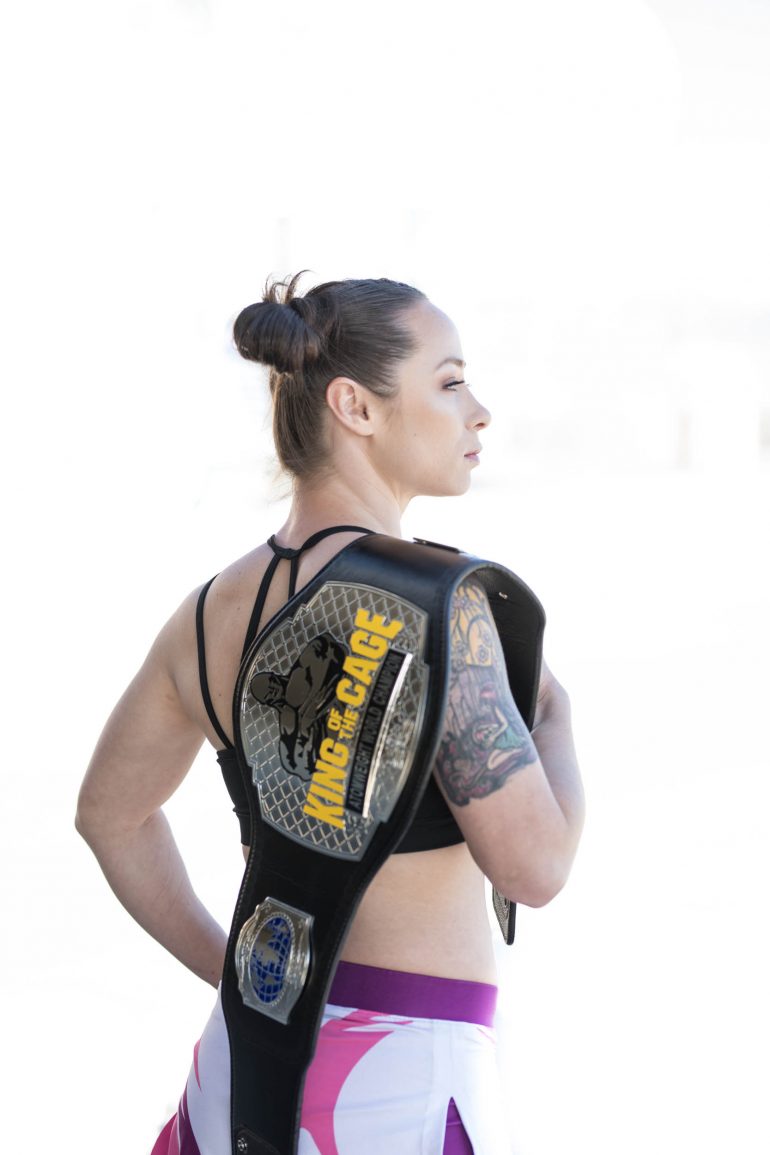 It was the evening of November 10th, 2017 inside the Blackbear Casino in Carlton, Minnesota more than 1,300 miles away from Albuquerque, New Mexico. FIT NHB’s Jayme Hinshaw was about to compete for the promotion’s Atomweight Title against Melissa Karagianis in the main event. There was no way for Hinshaw to know that the night’s conclusion would yield both good and bad for the path she was about to partake.

Between April and October of 2015, Jayme Hinshaw blitzed through her competition in four and a half minutes of total fight time. In what equates to 30-seconds less than one single round of professional competition, Hinshaw locked in three fight-ending submissions within the confines of the first round. In six months, Hinshaw would go from an unknown competitor making her debut on the first fight of a King of the Cage fight card in Albuquerque to a contender for one of New Mexico’s most talented up-and-coming talents.

Just 18-months after her amateur debut, Hinshaw would leap into the professional ranks in October of 2016 with a tough unanimous decision loss in Wisconsin. Hinshaw would bounce back with a submission finish over Melissa Karagianis (we will get back to her later) and impress in outings against fellow atomweight prospects Bi Nguyen and Cassie Robb. Hinshaw would lose those fights to Nguyen and Robb, though the fight against Nguyen was a razor-close split decision and her bout against Robb was a firefight from start-to-finish.

Though impressive in her professional career, Hinshaw was staring at a record of 1-3, a complete 180-degree flip from her 3-1 amateur campaign, and desperately needed a victory to get her back in the winning circle righting the ship and getting back to her winning ways.

“There is one fight that stands out the most in my books, it was the Kelly Vilarino fight. I had this sense of calmness walking to the cage. When I was in the fight things were just flowing, I wasn’t tired or worried at all. I went out there and put on one of my best performances and beat her at her own game standing up. And to hear the crowd chanting my name in an arena with my family there was just incredible. One of the best feelings ever.” – Jayme Hinshaw 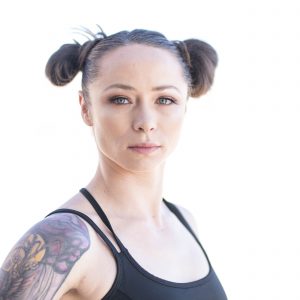 Though small in stature, Hinshaw is finding big time success as of late capturing the King of the Cage Title in her last outing.
Photo: Will Fox

The fight and its result was a turning point for Hinshaw who had now righted that ship and was back on the winning path. It was after this fight that things would turn around for Hinshaw as she would put in a solid performance in Rio Rancho that night and would be rewarded with a tremendous opportunity.

“When I turned pro my goal was to get to the top and win the title. I felt I had to prove I deserved a shot so I worked hard and got a unanimous decision win over a tough opponent, Kelly Vilarino. After that win I felt I should get the opportunity so I stood in the cage that night and said I think I deserved a shot. They (KOTC) came to me and asked if I would be willing to fight for the title and I couldn’t pass it up.” – Jayme Hinshaw

The title fight would come with familiarity as this bout for redemption would lead to Hinshaw once again sharing a cage with Melissa Karagianis. Since their first encounter, Karagianis would bounce back from losing to Hinshaw by winning the KOTC Atomweight Title truly making her name known among the growing list of WMMA rising talents and would now get her own opportunity for redemption as she could get back a loss while also defending her title.

The two would go on to dazzle the crowd in Minnesota, though at great cost for Hinshaw. In the first round of the fight Hinshaw took a kick to the arm and one punch later she knew she had been broken. In a feat of true championship spirit, Hinshaw would continue on and in the fourth round of their title fight would lock in a fight-ending rear-naked choke to become the King of the Cage World Champion.

“Breaking my arm in the first round and pushing through it to the 4th and getting that win was amazing. I have noticed more exposure and being offered other opportunities which is awesome. I once was told before to work hard and become champion and people will know who you are. Well, I guess they were right.” – Jayme Hinshaw 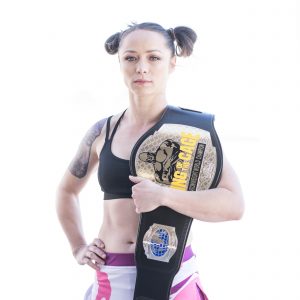 The future is opportunistic for Jayme Hinshaw as she continues on into 2018 as one of New Mexico’s rising talents and top WMMA prospects.
Photo: Will Fox

Hinshaw couldn’t be more correct about her rise in exposure. A simple search of Google trends or even a scroll through one of the major social media outlets and you’ll likely come across Hinshaw, newly crowned KOTC Champion and arguably New Mexico’s newest WMMA sensation. If you’re a fan of Comic Con, Hinshaw was even in her own booth for fight fans to visit and offered a glimpse at her KOTC Championship hardware. In a local fight scene seemingly in need of some marketable new faces to carry local fight cards, Hinshaw is both charismatic and unpretentious outside of the cage and a calculated yet aggressive athlete when the cage door shuts.

Whether Hinshaw can lead the wave of new talent will be ultimately decided when Hinshaw defends her title after recovering from the injury. Now a Champion, Hinshaw will have a target on her back from a row of challengers looking to make a name for themselves similarly to that of Hinshaw staring at a 1-3 record. A seemingly always motivated Hinshaw is more than ready for what is to come.

“My focus is on getting my strength and power 100% and to get used to all the new feelings I have in my arm. I am doing everything I should be and I am right on track. I have a feeling I am going to be a in a fight camp sooner than I thought. I am looking forward to successfully defending my strap. Most likely my return to the cage will be a title match.” – Jayme Hinshaw

Look out for FIT NHB’s striking buzzsaw Jayme Hinshaw when her arm heals up in 2018.