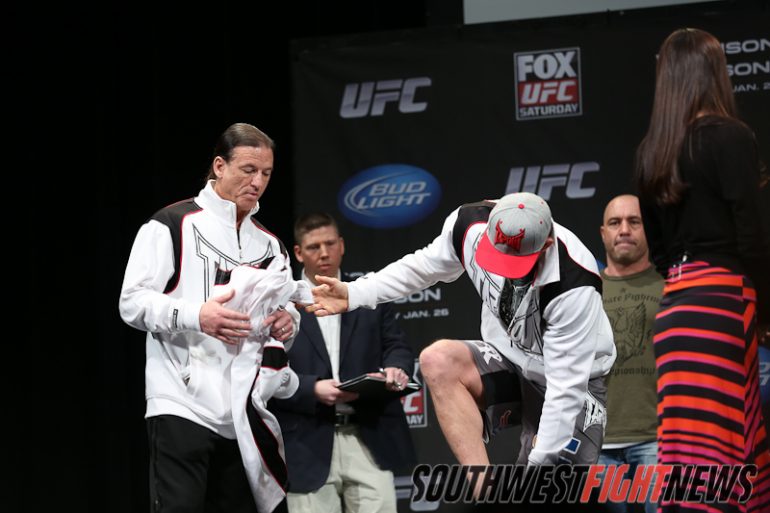 On May 19th, FIT NHB (Fighters In Training, No Holds Barred) celebrates their twentieth year of existence as an entity within the combat sports world. Not just a unique acronym, the lauded gym has been quintessential to the development and evolution of mixed martial arts in the State of New Mexico and the Southwest region.

Depending on where you would like to start MMA on a historical timeline, the first UFC was in 1993 and most use that date as the first day of MMA as the earliest edition of what we know the sport to be today. FIT NHB formed only five years later dating it to be one of the earliest gyms in our State to run with the developing sport and have made it into the combat powerhouse it remains today.

“In 1994 I was working club security at The Zone Nightclub when I met Arlene Sanchez. Management brought Arlene in as our female security person. Arlene was at the tail end of her pro fight career, was in peak physical condition, and was a tremendous asset to our crew. As time went by I was promoted to head of security at the Zone and Arlene worked back and forth between the Zone and a couple other clubs downtown owned by Vince Johnson and the Entertainment Group.” – Tom Vaughn

The duo that serves as halves of the gym’s ownership, Tom and Arlene, have anchored the success and been driving forces in getting the gym through the ups-and-downs and growing pains that come with the job of running a mixed martial arts gym. That may be easier to understand if you are within the fight world but nonetheless the pair has a plethora of experience gained in the 20-years to easily pen a few memoirs that could be top-selling books for fight fans.

Tom’s background traces to the original circle of Gaidojutsu, a system of fighting that originated in this State. Vaughn was one of the original three Black Belts in that system and would branch out to pave his own path to develop FIT NHB. Vaughn is also a Black Belt in Kenpo Karate as well as having extensive training in both wrestling and Muay Thai.

Arlene was a competitor in an era that came before today’s sports world that has been given significantly more avenues of viewing opportunities to fans via the rise of the internet in mid-1990’s. That is quite unfortunate because Arlene represented the AKKA Bad Company Fight Team that would boast over 100 world ranked combat competitors coached by famed Bill Packer. If you ask around, Arlene carries quite the reputation for being a talented and aggressive striker.

“At some point we arranged to train together at our friend / co-worker Pat Riley’s Taekwondo studio. I’ll never forget our first sparring session, Arlene was crackin’ for real. One of her punches hit me in that perfect spot on the jaw that causes that shooting pain in your ear when you bite down. Anyone who’s done enough sparring will know what I’m talking about! I was blown away. She was a better striker than anyone I knew woman OR man. I think this was kind of the beginning for us.” – Tom Vaughn 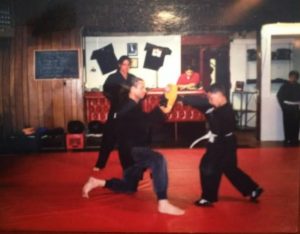 Photo of the first Gym. The little kid in the picture, Anthony Harker, is now 26 yrs old .

Before they would go on to become world-famed MMA coaches though there was plenty that had to fall into place first. For the growing foundation of FIT NHB it wouldn’t necessarily be combat sports that would help guide the growth of what would come, instead it would be a blend of business and personal that came next and it would lead to a couple of milestones in our story – the birth of a power couple and the budding partnership of two future coaches putting in the legwork of training fighters for the first time together.

“The Entertainment Group branched out, opened more clubs, and I was in charge of running security for all of them. One of the new clubs was called The Baja Beach Cantina and tt was a rough spot on the west side and I wanted to put together the best security possible. I immediately asked Arlene to be a part of the team and she accepted. By that time we were both single and I asked our mutual friend / co-worker Pat Lovato to see if Arlene would go out with me. Turns out she was into it. We had our first date and things progressed. We moved in together and decided it would be cool to open a little school. The owners of Baja Beach Cantina Vince Johnson and Ruben Baca allowed us to use part of the building that was unoccupied and with the help of our good friend Eddie Shepherd we got some equipment and got started. Right away we had a solid group of students for such a small space.” – Tom Vaughn

New relationship and training sessions in progress, I doubt that they could have expected what was to come and the type of journey they would embark on. It all started as humble beginnings using unoccupied space to train what Tom described as a “solid” roster from the start. No matter how solid he thought the group was, it was a teenager, so young he had yet to sniff out a diploma who would become the first iconic athlete to train under the tutelage of Arlene and Tom.

“The majority of our students were club security and frat boys. An odd mix but it was a good vibe. Among our original students from our first school was a high school kid name Carlos Condit.” – Tom Vaughn

One could only dream about being there to see a raw Condit, not “The Natural Born Killer” the MMA world knows today in all of his legend, but a young boy still in his adolescents making his first strides in combat molding himself a career that would see him become one of the most popular and polarizing individuals ever to strap on the four-ounce gloves.

It was the beginning of FIT NHB. One of the few gyms that ever made it in Albuquerque, a City hard on MMA business but ironically considered to be a “fight town”. Security paid the bills, but it was combat that drove the passion and through that a brand was born. Now fast-forward 20 years, the original stomping grounds for Tom and Arlene’s combat training could never be recognized again for what it once was.

“We named our company FIT NHB and later it would take over as the gym name. Our first location, The Home Depot on Coors / I-40 sits on that spot now.” – Tom Vaughn