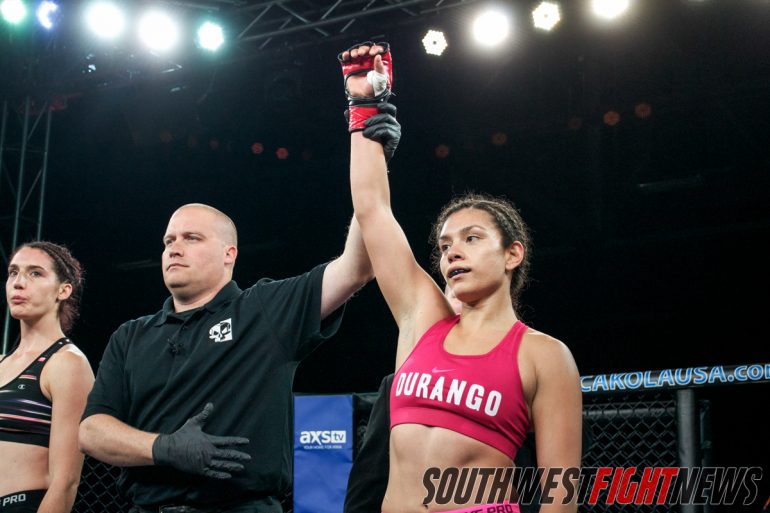 Though a list of fighters could have won this award this year, I don’t think there is a better story than that of Nicco Montano (5-2) and her rise to the top of the sport and hoisting a UFC Title above her head. It is a tale of a year split into two in that Nicco’s year started in January with a loss to Julia Avila for the HD Boxing & MMA promotion.

The fight was contested ten pounds heavier than Nicco’s current status as she fought for a regional title in the 135-pound bantamweight weight division. Though Nicco found success early on with a takedown and would continually excel in the clinch, she would drop the unanimous judge’s decision and would start her 2017 with a loss.

With the thought of giving up MMA for school on her mind, Montano would try-out for “The Ultimate Fighter”, a reality TV show broadcast on Fox Sports 1 each week. The show has a storied history and specifically so for New Mexico as the show has been a platform for several New Mexico trained athletes to make a name for themselves. Diego Sanchez and John Dodson are the two most notable as each won their respective season and would go on to carve out great careers for themselves.

When the show aired for the first time, a bracket was set-up with the sixteen fighters seeded from #1 to #16. The perennial favorites to win the show were Roxanne Modafferi (#1), Barb Honchak (#2), and Lauren Murphy (#3). In that same regard, the dark-horses of the tournament based on seeding were Shana Dobson (#16), Gillian Robertson (#15), and our very own Nicco Montano (#14).

Modafferi was a highly-regarded WMMA talent with Invicta FC Championship experience, and the same for Honchak who was a former Invicta FC Champion and considered by many as the best 125-er in WMMA. Murphy was actually already a UFC veteran and had been a pioneer in her own right in WMMA. 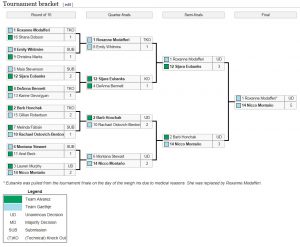 The sixteen fighter bracket was set-up at the beginning of “The Ultimate Fighter” and paved the way for Montano’s epic run as an underdog all season long.

By the time the show had concluded and fight fans began to anticipate the finale of the TUF tournament, Montano had already defeated Murphy (#3), Montana Stewart (#6), and Honchak (#2) in three consecutive fights. Her victory over Murphy in the first round was considered a prolific upset and her second round snuffing of Stewart cemented Montano as a tournament favorite. When she was paired with Honchak however, public perception was that Montano’s “Cinderella-esque” run through the tournament would be halted by the former WMMA Champion and a fighter many still regarded as the standard for elite level talent at 125-pounds.

Montano would go on to earn a dominant unanimous decision over Honchak and insert herself into the finale for a chance to compete for the UFC Championship. Her foe was slated to be Sinjara Eubanks (#12), but just a day prior to the fight, Eubanks was hospitalized during a weight cut and Roxanne Modafferi (#1) would jump in to take her place. Modafferi was slated to face-off with Honchak on the undercard that same night and had lost to Eubanks in the semi-finals.

With Modafferi next up for Montano, the Shiprock native would now complete the “murderer’s row” of the tournament as she had already defeated #2 and #3 ranked fighters with a match-up in the finale with the #1 ranked fighter from the bracket.

Over the course of five rounds, Montano would best Modafferi and captured the Inaugural Championship becoming not only the first ever Women’s Flyweight Champion, but also the first ever Native American UFC Champion. Nicco would also become just one of three New Mexico born Champions joining the illustrious pair of Holly Holm and Carlos Condit. On top of that, she was the third New Mexican to win the Ultimate Fighter joining Diego Sanchez and John Dodson in winning that accolade. She would also become the first fighter from FIT NHB to capture UFC gold, making the win not only significant for herself but for her entire team.

The crowning of a new champion occurred on December 1st. Almost 11-months apart, Montano’s loss to open the year and her winning the UFC Title, making for one amazing calendar year for the fighter training out of FIT NHB. Winning a UFC Title is the pinnacle of MMA and is the goal of just about every athlete carving out a career in combat sports and Montano did it in only a few years from starting her amateur career.

It was a meteoric rise for Montano whose story detailed living in a basement struggling to make it to winning the “Fight of the Night” bonus and ending 2017 as the UFC Women’s Flyweight Champion and this year’s SWFight MMA Fighter of the Year.