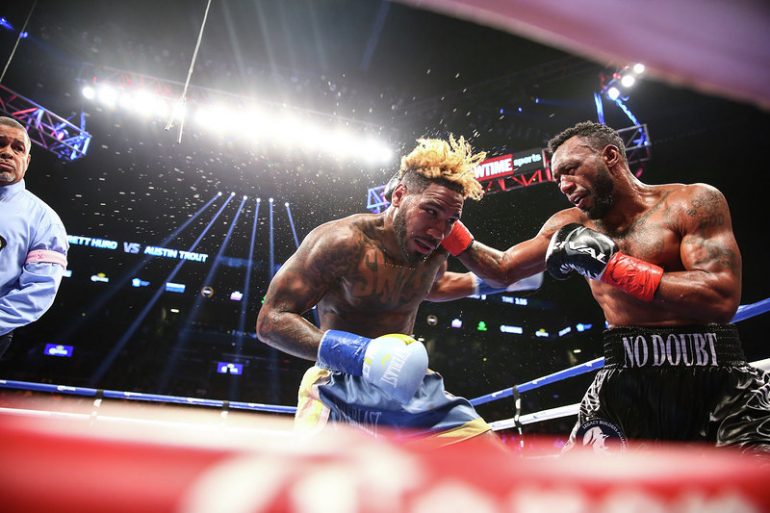 It was a classic power-puncher versus boxer contest when IBF Light Middleweight champion Jarrett Hurd and Austin Trout met on Saturday night at the Barclays Center in Brooklyn, New York. Something had to give and it did in form of a 10th round technical knockout for Hurd.

The bout started off as a boxing clinic for the Las Cruces, New Mexico resident Trout (30-4, 17KOs) winning the first three of four rounds on all three of the judge’s scorecards. Hurd Hurd (21-0, 15KOs) was highly competitive forcing most of the action with his advancement.

Trout was forced to fight fire with fire to the delight of the announced crowd of 7,643 fans on hand.

It was toe-to-toe action as the pendulum swung in the fifth round with Hurd walking through several of Trout’s power punches and began to land his own.

Elusive footwork and torso movement that helped Trout avoid punches early in the contest began to fail him as he slowed down in the sixth. Eating hard shots up the middle which wobbled him twice in the round.

A cut over Hurd’s left eye, due to a headbutt, temporarily gave a breath of rejuvenation to the bout. Trout began to target the eye as Hurd dared him to come in by keeping both of his hands down. It was a scene out of a horror movie as a bloody Hurd continued to walking straight at Trout.

At the start of the eighth round, the ringside physician was forced to take a look at Hurd’s eye whose corner did an incredible of mending the cut. This would be Trout’s last competitive round able to build momentum off jabs to the head and body. Each man had his moment with blazing combinations.

Trout’s eye was nearly swollen shot in the ninth from lead shots from Hurd that accumulated over the fight. A slower Trout helped Hurd duck and avoid the New Mexicans advances leaning the bout heavily in his favor.

Hurd was able to land at will with both hands in the 10th, giving Trout what may have been the worst beating in a round of his career. This forced both referee Eddie Claudio and the ringside physician to pay Trout a visit in the corner.

In the end, it was Trout’s corner gave the order to spot the fight giving Hurd the biggest win of his professional career.

Many at ringside were calling the contest a Fight of the Year candidate. After the bout promoter Lou DiBella let media at ringside know that both Trout and Hurd were likely going to be taken to the hospital.

Trout would be the only one taken that night. Relishing the moment, Hurd, came out of the locker room about half an hour after his fight to bask in the glory walking around ringside fans with a landing net— an obvious slight at Trout.

It is not certain where Trout’s career goes from here. He was unavailable for comment after the fight. For Hurd, a keystone victory over Trout opens the doors up for more high profiled fights and makes him more of a household name.

The grueling contest without a doubt was fight of the night as the co-main event between Jermall Charlo and Erickson Lubin ended in a 1st round knockout victory for Charlo, and the main event between Erislandy Lara and Terrell Gausha was not a fan favorite that the champion Lara, easily took by decision.