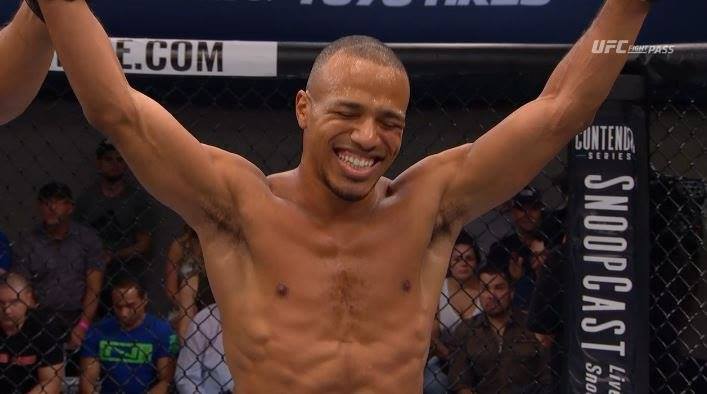 SWFight is rolling out our first edition of a “Fighter of the Month” feature that will publish the first week of the month and will highlight a local athlete who had an exceptional prior month. In today’s edition, we will feature an athlete who had an outstanding month of August and will serve as our inaugural “Fighter of the Month”. Any combat athlete is eligible for consideration and the only criteria is that whatever the reason for selection, that is must have happened in the month prior to publishing. Technicalities aside, let’s get to the content!

The fighter of the month for August was really a no-brainer. Luttrell-Yee’s Jordan Espinosa (11-5) had the opportunity for redemption and made sure that he left no argument that he was the standout local athlete this past month. Espinosa fought on August 22nd, 2017 for the week seven edition of Dana White’s Tuesday Night Contender Series. The weekday show is geared towards fighters on the rise or looking for an opportunity to get in/get back into the UFC ranks.

Before we discuss the performance, let’s backtrack a bit and set-up some context for the storyline that encompassed this fight.

In February of 2016, Espinosa fought Jackson-Wink’s Nick Urso (10-5) in a highly-anticipated Flyweight grudge match. The fight had several weeks of lead-up that saw Espinosa take the promotion of the fight onto his shoulders as he traded social media jabs with Urso and really set for a hostile match-up between two fighters representing rival Albuquerque gyms. The fight received lots of local attention and really set the tone for what would arguably be one of the most important fight match-ups for the local scene for 2016.

When the cage doors closed, the two fighters definitely showed that they had no intentions of being friends. Both fighters fought with intensity and put on a competitive round and a half, of which saw Urso earn takedowns and Espinosa elicit a knockdown. Unfortunately, the fight ended in controversy and in anti-climatic fashion as Urso would land illegal shots to the back of the head of Espinosa while in dominant position and the fight would be stopped. Upon doctor evaluation, the fight was halted and the result of the bout would end up as a No Contest. 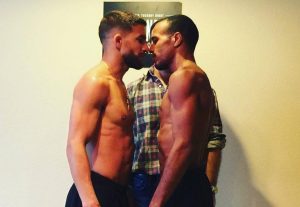 The two shared an intense stare down for weigh-ins that told the story of how intense the match-up was for both Albuquerque-trained fighters.

It was arguably the worst case scenario for a main event match-up that really sparked the local fan base with interest and robbed any sort of finality for either fighter given the tenseness that came with the match-up. A No Contest was neither a loss, or a win, and both fighters would move on without any considerable momentum.

Both fighters would stay busy, with Espinosa going 3-1 and Urso 2-1, before getting paired up once again and this time for the Dana White Tuesday Night Contender Series. The series will award at least one fighter from the five-fight event a UFC contract which comes with the platform of competing for a UFC affiliated event on the live streaming UFC Fight Pass.The fight’s hype video told the story on its surface. It was a rematch between rivals. An inconclusive and anti-climatic finish. Controversy. Etc. Etc.

It didn’t tell the story of how the fight was a pivotal one for both fighters. It can be argued the fight was a must-win for both Espinosa and Urso. Win-loss records and their numerical value hold weight to the UFC recruiters and Espinosa had more L’s in the column than Urso. In the case of Urso, at no fault of his own, is about to be 32-years old and a loss arguably sets him back simply for the fact that Espinosa has youth to his advantage nearing 28-years old.

And if that wasn’t enough pressure, both fighters knew they had to obtain finality in a decisive manner. Not only to inch closer to the UFC contract, but also to close the chapter that was disappointing for both. The first fight’s ending, a No Contest, may as well be a wasted effort in the opinion of many as it offers no conclusive ending.

Both fighters came out quickly and wasted no time getting busy mixing up strikes. Urso landed first and scored a hard head kick and put Espinosa on wobbly legs momentarily. Espinosa was able to clinch and shake the cobwebs long enough to separate. A straight left landed for Espinosa and then a head kick of his own would score a knockdown. Espinosa would move to a front choke where he really worked to get the arm placement in deep on Urso. The struggle would pay off as Espinosa would use a gator roll to set up the Anaconda Choke that would force Urso unconscious.

It was arguably the most exciting fight on the evening’s line-up. It was definitely the right choice to be the “curtain-jerker”.

The win marks the biggest for the career of Espinosa. He is now 2-for-2 in the national spotlight, a throwback to his win on AXS TV over Rafael “Barata” de Freitas, and has won seven of nine fights (one loss, one NC) marking the Urso victory as his second consecutive submission victory in the first round.

Espinosa didn’t win the UFC contract that night, but he is our “Fighter of the Month” for August of 2017.