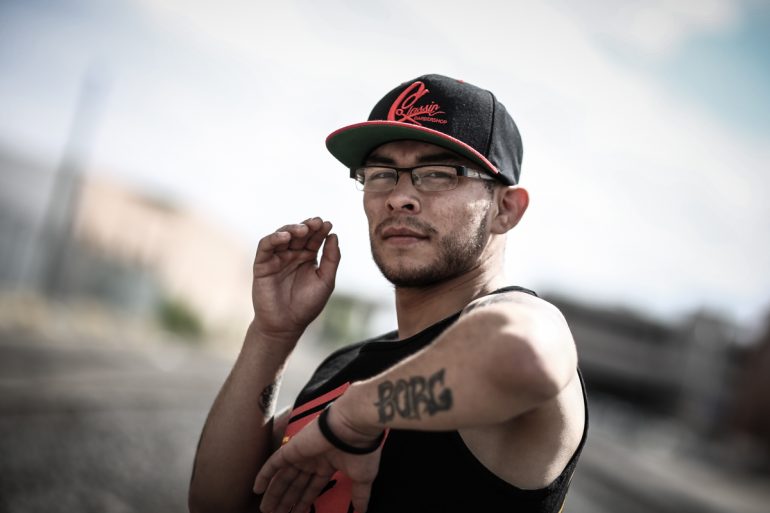 We only have a few days remaining in the work week, which to all of us fight fans can only mean one thing – inching closer to Saturday’s UFC 215 pay-per-view. While most UFC events are must-see for most fans, this weekend’s main event has an iconic and extremely special place in the hearts of a rich-cultured fight State. Raised in San Jon, and Tucumcari, New Mexico and later making Albuquerque his home, Ray Borg will look to dethrone UFC Flyweight Champion and Pound-for-Pound Great, Demetrious “Mighty Mouse” Johnson, as the main event of UFC 215 in Edmonton, Alberta, Canada this weekend, September 9th live on PPV.

In yesterday’s “Part One” of this mini-series, we covered the entirety of Ray Borg’s amateur campaign that saw the grappling savant dominate the opposition with four consecutive first round submission finishes. It would start and complete the first chapter of “The Tazmexican Devil’s” career and provide a solid ground for the foundation of a promising career in the sport of mixed martial arts.

Since his career was in its infancy, Borg has always stood out through his talent. He started his professional mirroring that of his amateur campaign going an unblemished 4-0.

A week after his nineteenth birthday, Borg competed in his first professional contest. Though he had experience as an amateur, Borg was thrown right into the deep side of the pool as he was matched with Gene Perez who was 3-3 at the time. Perez had just won via devastating knockout over a promising Colorado fighter and was equipped with both cage and ring experience with Perez competing in the sport of boxing on several occasions.

It took a bit longer than his amateur bouts, but Borg stayed on form in his submission savvy ways as he would lock in a fight ending rear-naked choke in the first round. The fight would last 3:01, by far Borg’s longest outing, and really put himself on the radar as Perez was in a lot of ways already a gatekeeper of sorts for the Flyweight division regionally.

Keeping the hype train alive, Borg would start 2013 with his second pro outing in Arizona. In fact, it would be the first of two consecutive fights in the state of Arizona. First up, Borg would finish Peter Baltimore in the first round in a fight that lasted 4:03. Including his amateur outings, this rear-naked choke victory would mark five of his seven bouts ending via this form of submission. It was safe to say by this outing that if Borg got to back position, it was only a matter of time before you were strangled.

Check out Ray Borg’s post-fight interview and watch a young(er) Borg talk about his career to that point.

In his second Arizona outing, Borg would flash his domination in a different format. This time Borg would maintain the top position instead of hunting for back control and he would finish opponent, Lee Lindow via TKO due to strikes in just under 2-minutes of the first round. The grappling wizardry shown by a young Borg provided him the platform to use his undefeated record to climb the popularity ranks and make a name for himself in the southwest region. With the win, Borg showed he was not only dangerous from back mount, but lethal anytime the fight hit the mat.

Let’s put Borg’s career into perspective at this point. It was May of 2013, Borg was 3-0 as a professional with all first round finishes and two of those in the Arizona circuit. Including his amateur bouts, Ray had fought in New Mexico, Arizona, Nevada, and Oklahoma. Though he was a young nineteen year old, he was slowly becoming a veteran. He had the experience of traveling and fighting away from home against fighters in their home markets. He was already considered a legitimate specialist in submissions and was quickly rising the ranks of prospects coming out of New Mexico.

What Borg hadn’t done to this point, which could have been expected given his actual time in the sport, was be featured as a headlining act for a fight card. Up until that time, Borg had only competed under the King of the Cage banner and competed in the preliminary portion of the fight cards.

That all changed in August of 2013 when a freshly aged 20-year old Borg was matched up as the main event of an event titled “North vs. South”. Borg was marketed as the “South” fighter and he would compete against the “North” side fighter Angelo Sanchez. This was notable for several reasons including the fight being the first headlining act of Borg’s career; the opponent, Sanchez (then 12-3), was not only much larger normally competing as a 145-pound Featherweight, but he was vastly more experienced. 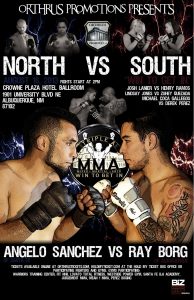 “North vs. South” was the breakout moment for Borg as he dominated a larger and vastly more experienced opponent in Angelo Sanchez.

Sanchez was known as and remains one of the biggest draws in the State of New Mexico and specifically one of the most iconic athletes from Northern New Mexico. He had not only headlined fight cards, he had already held the King of the Cage World Title by this point in his career. Sanchez was a bona fide veteran of combat and on paper, this fight was a complete mismatch. 145-pounds vs. 125-pounds, though the bout was held at a weight of 135-pounds meaning Borg would enter the cage the much smaller fighter and giving up twelve fights of experience. Not to mention that he gave up about five years worth of competition experience and several more years when you tally the experience Sanchez had in Muay Thai and BJJ.

The promotion, of which is now defunct, inevitably dropped the ball on the marketing of the show as the fight match-up should have been huge news at the time. Instead, the fight didn’t generate too much buzz due to a number of reasons including the promotion not working well with the best media outlets and as a result, the fight flew under the radar and was contested in front of a less than packed house inside the Camel Rock Casino.

Behind the scenes, the fight was contested at the level of the Athletic Commission with a concern coming from an individual of anonymity who challenged the approval of the event based on the perceived mismatch.

The thought it could be a mismatch was definitely on the minds of fans following the lead-up of the fight. Most believed the size and experience would be too much for the inexperienced and smaller Borg. Public opinion changed dramatically when Ray Borg dominated Angelo Sanchez over three rounds.

It was a true “breakout” moment for Borg as he had dismantled an adversary that was supposed to be too good, too big, too strong, and too battle tested to lose to a much smaller, younger, and less experienced Borg. The win vaulted Borg into the higher echelon of New Mexico combat sports and officially labeled Borg as a legitimate top-shelf prospect. He even won SWFight’s Breakout Fighter of the Year for 2013.

Borg earned a Unanimous Decision victory marking the first time Borg had seen a second round and also went down as the first time he wasn’t able to secure a finish. As impressive as finishes usually are, it was arguably equally impressive that Borg was able to control the Jiu Jitsu specialist on the ground and dictate the pace with Sanchez who was also renowned as a Muay Thai practitioner. Borg showed his wide array of talents and put on a show for the fans by showing a full toolset in which he showed composure and durability against an opponent who on paper had all the advantages.

While a mere 4-0 record may not seem awe-inspiring to most, Borg was well on his way to taking over New Mexico and had the showings of a bright career that was beginning to emerge. The Arizona born, but New Mexico raised athlete was carving out his own path and he was about to embark on a journey over the course of two fights that would launch him into the national spotlight.

He dominated the amateur ranks. He blitzed the opposition in his first four professional outings. What was next? A regional title, the biggest win in NM flyweight history, and his opportunity in the big show.