Twenty years ago, one of the greatest moments in Albuquerque sports history took place when the city’s two native boxing sons, Johnny Tapia and Danny Romero, faced off July 18, 1997 at Las Vegas, Nevada’s Thomas and Mack Center in a Super Flyweight unification title fight for the ages.

I was an 11-year-old watching the fight at my nino’s Westgate home. My godfather cheered for Tapia, while my father, despite knowing Tapia from his brief time living in the Wells Park neighborhood in the 1980s, thought Romero’s power would be the difference. 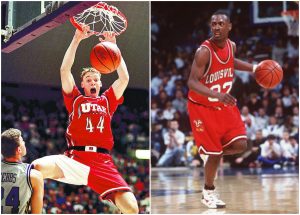 I sat there beside them in silence, soaking it all in. The contest was a much-needed breath of fresh air for myself and many Albuquerque sports fans. We were all still mending our wounds from the University of New Mexico Lobos’ loss at the buzzer —I still hate you Keith Van Horn— to Utah at the WAC Tournament in March of that year (coincidentally, also took place at the Thomas and Mack Center), and a 1-point loss a few days later to Louisville in an all too familiar second round exit of the NCAA Tournament—and I also still hate you DeJuan Wheat!

Both Tapia and Romero came into the fight with incredible credentials. The 30-year old Tapia came in with a record of 40-0-2. He was the defending WBO Super Flyweight champion, a title he had won in Albuquerque three years before.

Having just celebrated his 23rd birthday the week of the fight, Romero, had an exceptional 30-1 record with the WBO Super Flyweight championship, a title he claimed two years before.

The hype for the bout was unlike anything else in the city’s history. (Do yourself a favor and check out Dan Sisnero’s “The Johnny Tapia and Danny Romero Newsreel” which documented most of the local lead up to the fight).

“We would have filled the [University of New Mexico] football stadium”, Romero said in a recent interview. The truth is, the fight was too big took take place in Albuquerque. The two fighters needed and deserved to be showcased on the world stage.

Couple that with bad blood between the camps and friends of the fighters which helped further fuel the boxing beef, it is probably a good idea the fight did not take place in Burque. The city would have probably been burned down.

On fight night, all precautions were taken as over 100 Las Vegas Police Department officers and gang unit officials, many undercover, were sprinkled among the crowd at the Thomas and Mack Center to ensure tempers did not flare outside of the ring.

Both men displayed incredible technical skill and thrilled the crowd of over 11,000 die-hard fans.

Referee Mitch Halpern did a phenomenal job officiating the contest despite the implications of the contest and the animosity that existed between the fighters leading up to the fight.

After many accidental head-butts and unintentional fouls, Tapia would extend his left hand to greet Romero, who was uninterested in the pleasantries.

There were three main shifts in the fight: Tapia controlled the early rounds with his speed but Romero rallied in the middle stanzas with good hard shots. In the end it was Tapia’s speed, footwork and experience, having gone past nine rounds 10 times in his career up to that point compared to Romero’s three, that ultimately allowed him to pull away.