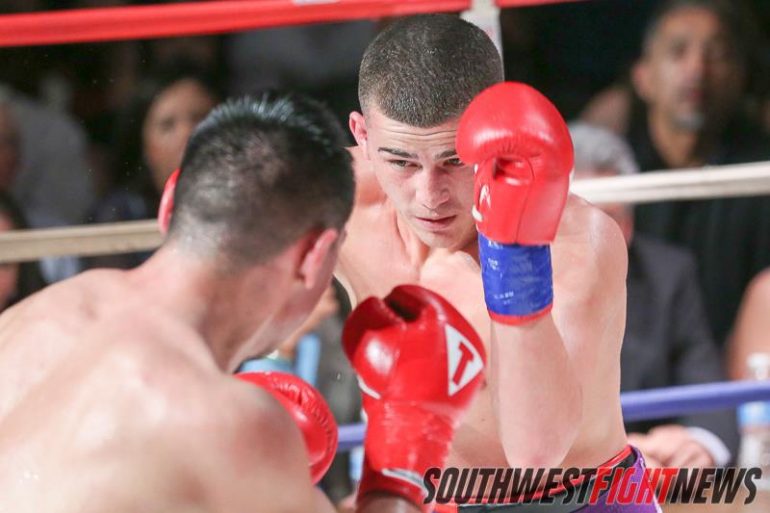 With a win Sanchez camp hopes for Josh Torres rematch

When his original opponent was forced off of the upcoming September 24 Elite Warrior’s card, Albuquerque boxer Jose Luis Sanchez did not have to wait long for a bullish challenge.

“We have to be careful to not get a cut,” says Sanchez (5-1, 2KOs), referencing some possible head butts his team expects with Crespin. “I feel that I’ll be able to box him from the outside with my length.”

After his 2013 fight with Josh Torres, many expect the bout against the southpaw Crespin to be Sanchez’s toughest.

Sanchez says this fight with Crespin will be much different than the Torres bout where Sanchez went into the fight with just two fights of professional experience to Torres’ 13. Torres won that bout via seventh round technical knockout.

“Before (the Torres fight) I wasn’t getting many fights–promoters really wouldn’t give us a chance; I’d have to wait a year between fights,” says the 23-year-old Sanchez who in the first half of his career had eight bouts fall through.

“(Legacy Promotions) has had me on their last three cards and I feel like I’ve improved with every fight,” he continues.

After some reshuffling of the bill, Saturday’s fight with Crespin is now scheduled to be the co-main event of the evening. Sanchez’s brother, Jason, who holds an undefeated record of 7 wins and 0 losses with 3 knockouts, asked the promoters for his bout against Las Cruces’ Juan Carlos Guillen to be moved to the ante-penultimate spot.

The request was two-fold: the brothers who are both trained by their father Pepe, have become extremely close since the 2015 passing of their eldest brother, former boxer, Alan Sanchez.

At just 21 years old, Jason also serves as a lead coach during Jose Luis’ bouts. As the co-main event fighter, the younger Sanchez, would not have been permitted by the New Mexico Athletic Commission to be in his brother’s corner right before his fight.

“It’s a family affair and it’s important for us to be by each other’s side,” said Pepe. “There’s no jealousy between the brothers. Jason’s good at coaching his old brother in fights.”

“Alan will also be there in spirit,” he continued emotionally.

“This is definitely a big fight for me. It really is,” says Sanchez. “By beating Crespin, it would be a big win because he’s well known here in New Mexico and he’s more experienced.”

To add to the drama of the highly anticipated local match, Torres, the only loss on Sanchez’s record, is the main event that night taking on Arizona’s Jose Marrufo in a rematch of their 2013 classic.

“I’d like for (Torres) to win his fight, and Jose Luis to win his; so why not a rematch?” says Pepe. “We put Jose Luis in too early against Josh but no excuse– we lost. This time we’re much more prepared, Jose Luis has gained muscle mass and now has experience. We want that rematch.”