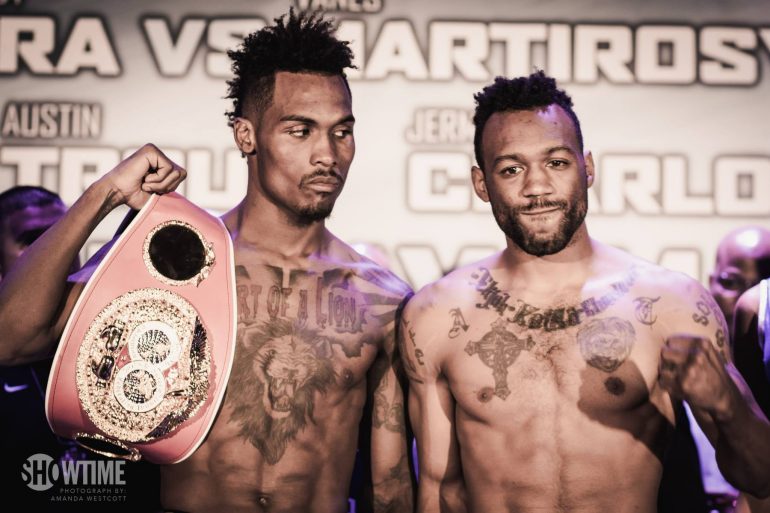 It has been 896 days since Austin Trout last stepped in the ring for a world title fight. He has been an underdog in his last three championship bouts—tonight, will make it four as he enters his contest against IBF Super Welterweight champion Jermall Charlo with a stacked 4-to-1 odds against him.

The numbers, at least on paper, do favor the 25-year-old, Charlo (23-0, 18KOs): 6-foot, technically sound fighter, undefeated with 18 knockouts in his 23 career bouts. His youth, height and reach advantage have sportsbook heavily leaning toward the Houston native.

It took the Las Cruces, New Mexico raised fighter, Trout (30-2, 17KOs), two and a half years to get back to this position. It is a world title shot he has earned by beating middle-of-the-pack fighters during that span.

After losing his WBA Super Welterweight world title to Saul ‘Canelo’ Alvarez three years ago, Trout has been fighting sans a world championship.

“Every time I’m announced, they introduce me as ‘the former world champ’,” says a disgruntled 30-year-old, Trout. “I actually have to correct them and tell them, ‘And future’ [world champ].”

For tonight’s card, reminders of past losses are prominent; his opponent from his last title fight loss, Erislandy Lara, fights in tonight’s main event against Vanes Martirosyan, the man who defeated Trout in his last amateur bout.

Trout, nonetheless, enters this contest the most serene this writer has ever seen him.

“I’ve always felt that I need to be strong in three different planes: physical, mental and spiritual,” says Trout, who recently has been questioning and furthering his understanding of Jesus Christ and the Bible. “Maybe my spiritual has been lacking the most.”

Recently, considering a conversion to Judaism, Trout has become a much healthier eater and is living a cleaner lifestyle ahead of this fight.

“I’ve been eating clean animals. I’m not perfect and sometimes it’s overbearing but it’s not supposed to be like that,” he says. “I have to remind myself that I’m on God’s time.”

That patience has led Trout to his title fight tonight, the eighth of his professional career. Despite these credentials, amazingly, this is the first time that Trout is on a boxing card in the fight and the gambling capital of the world, Las Vegas.

“I want to take over the world of boxing so how can you take over boxing without fighting in Vegas?,” says Trout.

The gambling side of the city has his opponent as high as a 7-to-1 favorite at one sportsbook.

“No one has ever given me a chance.” Trout continues. “This is another opportunity to prove them all wrong.”