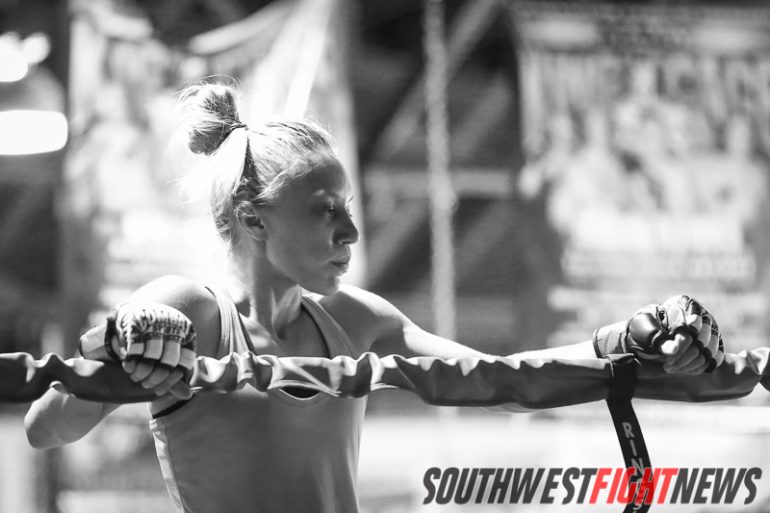 We are on the eve of the most important fight night of Amber Brown’s career. Tomorrow night, Friday, March 11th, Brown will fight for the Invicta FC Atomweight Title as the headlining act in Las Vegas inside the Hard Rock Hotel & Casino. While Vegas may be on the cool down from last weekend’s major UFC event, “The Bully” is poised to turn up the heat and announce her presence in the elite company of a select few fellow local athletes who have been major world champions in the sport of MMA.

When Brown (6-1) steps into the cage for tomorrow’s main event against current Champion Ayaka Hamasaki (12-1), she will have the opportunity to become the second New Mexico trained fighter and the first true local fighter to capture Invicta FC gold. Hailing from Moriarity, Brown can join fellow Atomweight Michelle Waterson in bringing the Title back to the “505”. Waterson, now a UFC fighter, used her opportunity in Invicta FC to raise her stock and exposure levels to the point that she became a bona fide star in MMA.

There is no reason to believe it will be any different for Brown.

Currently riding a four-fight win streak, Brown has performed at a high-level finishing three of four opponents in that span. They don’t call her “The Bully” for her timid fighting style, instead, Brown has earned the nickname for her aggressive style of fighting that allows her to be in her opponent’s face from the opening bell and will last until a finish or the final bell rings. Not only is the fighting style fan-friendly, Brown has pushed the pace to such an impressive level that it would be hard to name someone with a comparable gas tank and offensive output. Even when Brown is in positions traditionally considered defensive positions, Brown somehow still finds a way to dictate pace and be the more offensive fighter.

Representing FIT NHB and the New Mexico Wildbunch, Brown has one of the sport’s best coaches with special emphasis on WMMA. Highly regarded, Arlene Sanchez is considered by many as one of the better striking coaches you will find in the sport and when you attribute her tutelage to the many talented women fighters in her gym, it would be hard to argue that point. Brown joins an impressive list of WMMA athletes including Brenda Gonzales-Means that train under Sanchez.

Without throwing shade on any promotion or promotional title, a victory for Brown will crown the first major Champion for the FIT NHB team. Sure the gym has produced title victories in King of the Cage and other regional promotions, but Invicta FC is considered the marquee promotion for WMMA in the Atomweight, Flyweight, and Featherweight weight divisions. Again, no intention to discredit any fighter, but a win will mark the first #1 fighter in any respective weight class for the gym. While Tim Means and Ray Borg have made waves of their own in their respective weight clases in the UFC, Brown would not only capture the Title but would be considered the best fighter in the world in her weight class. In fact, it makes it even more impressive that Brown can achieve such great accomplishments amidst a gym with great accolades already attributed to so many of its fighters.

Brown is coming off back-to-back first round victories and champion Hamasaki on paper is poised to offer a greater challenge this time out for Brown than her most recent foes. Hamasaki has only been defeated once, a knockout loss to current #1 contender in the ufc 115-division, Claudia Gadelha. Hamasaki is a grinder who pushes an intense pace similar to Brown which will make for an intriguing match-up of two high-paced athletes. Hamasaki has spent most of her career overseas in Japan and fighting for top international promotions DEEP and Jewels.

The fight is monumental for New Mexico MMA. Though Waterson is embraced as a local and respectively so as she has spent much of her career training in Albuquerque, Brown will be the first “home-grown” fighter if you will, to capture the Invicta FC title. Similar to that of Holm’s UFC Title victory months ago, Brown can take the fight game by storm to once again cement New Mexico’s elite status in the combat sport’s world.

Brown has the opportunity to join Holly Holm, Carlos Condit, and the aforementioned Waterson as locals who have held a major MMA title, however, she may be the most surprising of the bunch. Not to say Brown isn’t as talented because her placement in tomorrow’s main event tells that story thoroughly, but she has flown under the radar for years during her rise to prominence. Soft-spoke, Brown has seen mainstream exposure in her last few outings but this will definitely be the brightest light ever shining on the 105-pound fighter.

And that bright light has been earned through hard-work.

Starting with King of the Cage back in 2012, Brown first made a name for herself fighting in Japan for Pancrase where she pulled off one of the biggest upsets in 2013 when she bounced back from her lone career loss with a stunning victory over highly-regarded Kikuyo Ishikawa. The victory earned her national attention and the following year in 2014 she would make her Invicta FC debut. Since that point, Brown has won her three Invicta bouts including an exciting bout with Liz McCarthy and dominant finishes of Catherine Costigan and Shino VanHoose.

Brown possesses a calm demeanor but can be considered anything but that when speaking of her in-cage talents. Expect a high-dosage of clinch work and technical striking abilities. And if we take anything from the upset of Ishikawa, Brown is no slouch from her back should Hamasaki intend to push for the takedown. Brown’s talents definitely fit the bill of a World Champion and she will have 25-minutes over 5-rounds tomorrow night to confirm that to be truth.

Will Amber Brown become the next star of MMA to represent her hometown in New Mexico? Well, she has that opportunity tomorrow and SWFight would like to send our best wishes to Brown and her team for tomorrow’s title fight as well as their travels back home.

Hopefully that travel back home includes an extra piece of hardware around “The Bully’s” waist.