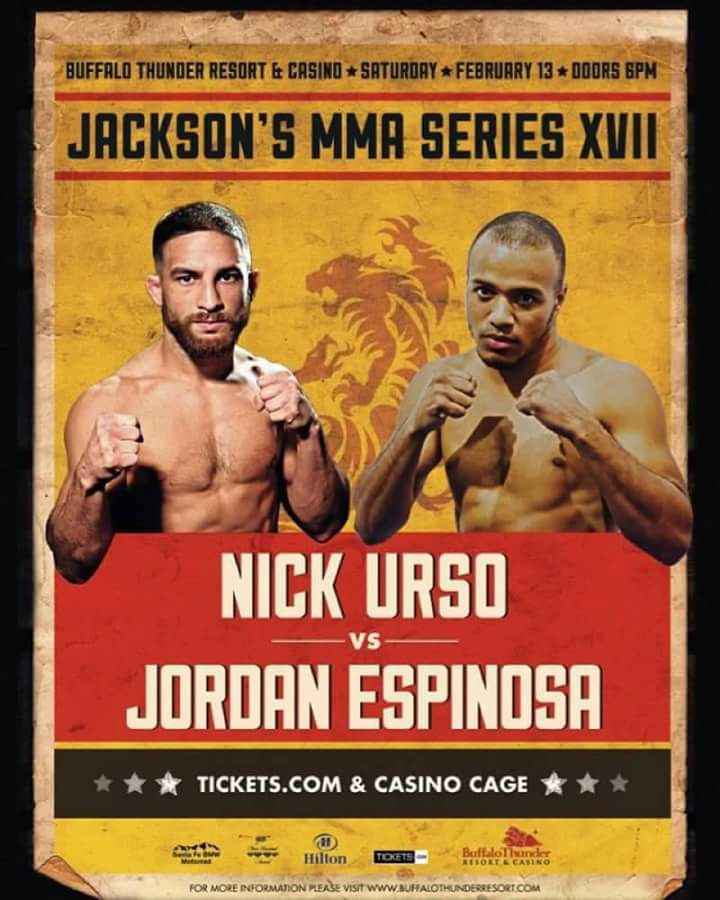 It was a very anticlimactic end to one of the most anticipated contests in recent local MMA memory in Saturday night’s Jackson’s MMA Series XVII main event.

A crowd of about 1,500 was on-hand at Buffalo Thunder Resort and Casino in the Pueblo of Pojoaque, mainly due to see if Jordan Espinosa could put action to the social media jabs he delivered in the weeks leading up to his main event bout against Nick Urso.

The contest started with both men immediately meeting at the center of the cage. A front-kick from Urso (8-2) to the gut of Espinosa (7-4) sent the Albuquerque-raised fighter to the ground in a sitting position of which he quickly rose up from. 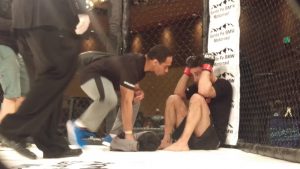 Nick Urso sits in a state bewilderment as his lead cornerman for evening, John Dodson, consoles him.

Espinosa, possibly looking to immediately make amends for the kick, attempted a telegraphed flying knee. Urso used the leisurely advance as his chance to deliver an impressive takedown, catching Espinosa in mid-air and driving him to the ground. Working from the guard Urso, would land short punches that Espinosa would do his best to respond to.

After a brief stalemate, the referee would ask the men to stand. Urso would immediately attack Espinosa who in turn would time him beautifully with a straight left hand that floored the Jackson’s-Wink MMA fighter. This drew a large reaction from the crowd.

Recognizing the golden opportunity Luttrell-Yee MMA’s Espinosa would attempt to implement a D’arce Choke that he is widely known for in training. The unsuccessful attempt would lead to a tussle where Urso would be a recipient of a low blow.

When the action resumed, Espinosa earned a takedown and scored in the ground and pound with a pair of hard punches to Urso’s head to end the round. Espinosa would be greeted by an elated corner.

The crowd’s energy ushered in the second stanza. Incredibly, Espinosa would again attempt a flying-knee. Urso, who was working from a southpaw stance, would once again snag Espinosa in mid-flight, slamming him harder to the ground then he did the first time.

“It was a total lapse of judgement,” said Espinosa post-fight. “[After the first round] my corner told me, ‘No more flying-shit’; the next thing I do, is some flying-shit.”

Urso would once again take advantage, this time landing sharp elbows from the half-guard position. In an attempt to desperately scrabble and sweep out of bottom position, Espinosa would give up his back.

Urso would deliver big shots to the side of Espinosa’s head. He would continue the pressure and flatten Espinosa out in the next series of blows. One of the shots momentarily saw Espinosa nod off as though for an instant his entire body shut down.

At this moment the referee jumped in. It was unsure to everyone in attendance whether he was stopping the fight to award Urso a technical knockout victory or calling a time out. After signaling for the ringside physician it was obvious that the official felt one of the punches was an illegal shot to the back of the head.

The blow would cost Urso a point. In shock, Urso held out his arms out wide in disbelief. Meanwhile, the doctor would tend to Espinosa. Shining a light to his eyes and performing a quick sight test, the doctor, alternated between holding up one and two fingers asking Espinosa to confirm the number of fingers he was holding up.

“[The doctor] asked me if I could continue and I said ‘yes’,” Espinosa told us post-fight. “He asked me ‘how fingers am I holding up with’ his left hand I said two, he had one. He said, ‘how many’ in his right hand, I got that one right, then he asked me again and I said two, and he had one so then he said, ‘you can’t continue’, and I said, ‘well, fuck!'”

After what felt like an eternal three-minute delay, the doctor explained to the referee that Espinosa was not fit to continue. The referee would officially waive the bout off rendering the official result of a no-contest.

“I’m still a little confused–I know I hit him in the head and the face quite a few times,” said Urso in a post-fight interview. “He was ready to be done… I guess the ref disagreed and felt like I hit him with an illegal shot.”

“I remember he had my back–I think, I was belly down and he hit me with an elbow to the back of the head… kudos to him he got the position,” said Espinosa of the ending to the bout. “He’s a hell of a fighter. I didn’t fight even 50% of my ability.”

“I feel like I won the fight but I just got robbed out of the win,” said Urso when asked about this fight having an effect on a potential shot at the UFC. “Hopefully the people that matter see that I won and I can just move forward from here because you know, I dedicate and give a lot to this.”

“Unless someone’s going to make it worth my while to fight in a shitty commission, I ain’t fucking doing it,” said Urso about a potential rematch against Espinosa in New Mexico. “It’s just not worth it to me.”

For Espinosa, another fight against Urso would help him get over what he feel was not one of his best performances.

“I do want a rematch,” said Espinosa. “I really want to get over this fucking bullshit ass performance… I fucking felt like a robot and that’s not how I like to fight.”

For a recap of every fight please check out our play-by-play coverage from last night by CLICKING HERE.

[…] anticipated among New Mexico mixed martial arts fans, especially those that were in attendance at their first bout February of 2016 at the Buffalo Thunder Resort and Casino in the Pueblo of Pojoaque. The fight ended in a no-contest […]

[…] February of 2016, Espinosa fought Jackson-Wink’s Nick Urso (10-5) in a highly-anticipated Flyweight grudge match. The fight had several weeks of lead-up that […]