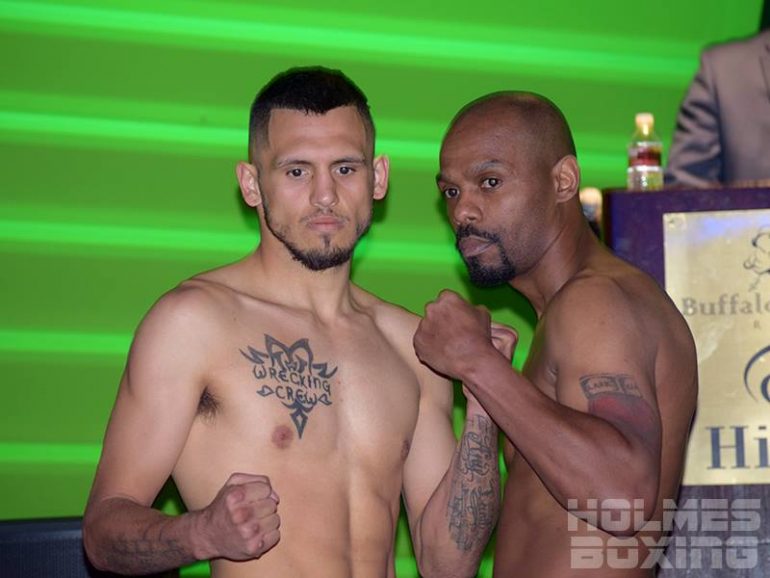 A sold out crowd of 2,170 packed the Buffalo Thunder Resort and Casino ballroom on Saturday night. Those in attendance for the Holmes Boxing Promotion’s “Cold War II” card voiced their pleasure, and distaste in the two fights involving the promoter’s, Patrick Holmes’ sons.

The main event was controversy free as the second best boxer in the state of New Mexico, Fidel Maldonado Jr. (21-3, 18KOs) of Albuquerque, played a chess match with 43-year-old Michael Clark (44-15-1, 18KOs) in the opening stanza of their scheduled eight-round bout.

In the second round, Maldonado would pick up the pace and easily outstrike the Columbus, Ohio native. A slick right hook followed by a glancing straight left hand from the southpaw staggered Clark who after a couple of seconds would hit the canvass.

A ten-count from referee Rocky Burke would give Maldonado the knockout victory.

What is next? Maldonado Jr. is looking to have his next fight take place in Albuquerque and is also hopeful of getting a rematch against Michael Perez in Las Vegas. In 2012, Maldonado Jr. lost a questionable split decision to Perez in Indio, California.

Holmes’ (4-1) defense and counterpunching helped him take the first but Gloria’s pressure and power-punching kept the fight tight in the next three rounds.

The Albuquerque-based Gloria (1-1) found success with looping over the top right hands in the middle rounds.

The second round would see both men have their moments. Forcing the majority of the action in the third, Gloria would force Holmes Jr. to be less active and play defense.

In the fourth and final round, Holmes Jr. picked up the offense. Boxing from the outside by using a lead left jab, he would avoid the heavy blows Gloria landed continuously earlier in the bout. 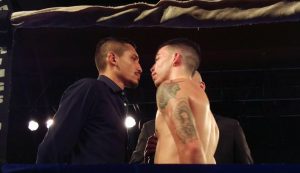 Alex Holguin and Patrick Holmes Jr. faceoff. The two men are expected to fight in May.

The rendering of the scorecards, all in favor of Holmes Jr.–this includes a head scratching four rounds to zero card—was greeted with scores of boos from the west end of the ballroom. The derisive response was challenged and eventually overcome by cheers for Holmes Jr..

The victor would be joined in his post fight interview by Alex Holguin who earlier in the evening had improved his record to 7-1.

The men posed for a stare down as ring announcer Mike Adams alluded to a potential match-up between the two men in May on another Holmes Boxing card. With WBC Supervisor Alberto Leon in attendance, it’s possible the highly anticipated local match between Holguin and Holmes Jr. would be for a minor WBC title.

In the co-main event of the evening, early on, Brandon Holmes would weather a light storm from Eric Gonzalez in a bout that was rematch of their May 2014 encounter which Holmes won by unanimous decision.

Unable to develop a true rhythm in the first three rounds due the relentlessness of Gonzalez (1-4-1, 1KO), Holmes (7-0, 5KOs) found a home for barrage of flush combinations.

The impactful blows rocked Gonzalez forcing referee Burke to jump in and call a halt to the action at the 02:38 mark of the fourth round to the disdain of the Gonzalez fans, who were joined by the Gloria contingent in voicing their disapproval of the stoppage.

After a 108 win and four loss amateur career, Matthew Griego made his professional debut against El Paso, Texas’ Ramon Lopez on the card.

Griego’s debut would end successfully with just six seconds left in the first round.

It is one fight against an opponent who told us that he had not fought in the amateurs but the future looks bright for the Cameron Dunkin managed prospect known as “Diamond Boy”.