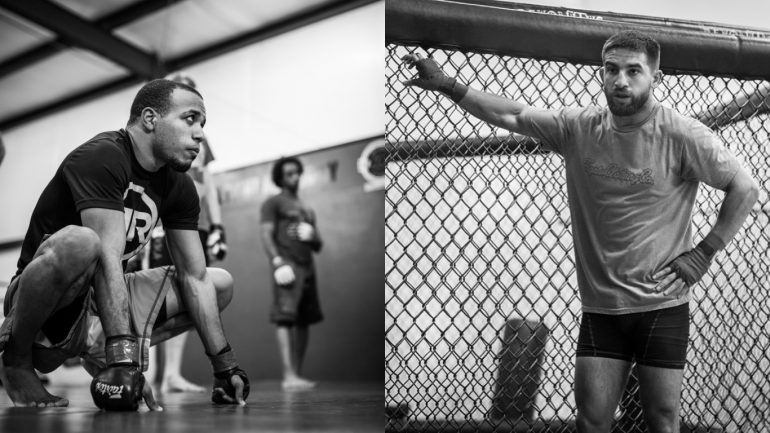 This is sports-entertainment, ladies and gentleman, and today we touch on one of the more entertaining rivalries our local scene has had for quite some time. Sure, there are the purists out there who believe trash-talk doesn’t have a place in combat sports but in this case, it is a breath of fresh air for a fight scene that is in desperate need of some revitalization.

That may be changing real soon.

Since Nick Urso (8-2) defeated Jordan Espinosa’s (7-4) teammate Joshua Montoya last February, Espinosa has not been shy about his desire to match-up with Urso. In fact, immediately after Urso had his hand raised at the Buffalo Thunder Resort & Casino, Espinosa had stated his intentions on social media with the subtle update reading, “I want Urso!”.

But it didn’t end there. Espinosa would continue his pursuit of a match-up with the fighter who splits his time between Albuquerque and Chicago. 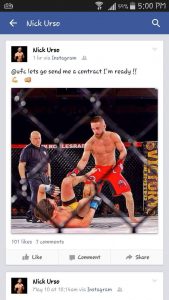 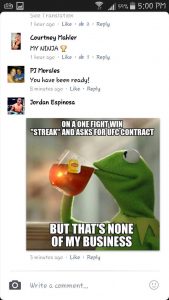 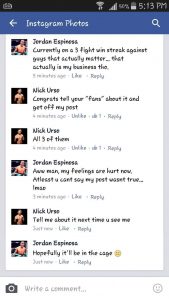 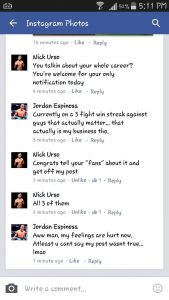 Espinosa used a post from Urso asking for a UFC contract as his platform to court Urso as his next opponent. A few comments from the two fighters and one Kermit The Frog meme later and a rivalry was ignited.

And if you follow our SWFight Facebook Page, you will see a post with a photo that we shared from Espinosa’s Facebook Page breaking down the comparison between the two. It should go without saying that Espinosa’s assessment wasn’t a favorable one to say the least.

Espinosa’s chatter is definitely new to the local fight scene. He definitely isn’t the first to do it, but nobody has really embraced the role of an entertainer in recent times.

Fast forward essentially one-year forward and Nick Urso will once again find himself in the main event of a Jackson’s MMA Series event inside the same resort as 2015 and once again squaring off with an opponent vocal of his displeasure towards the talents of the Jackson-Wink and Izzy Style Wrestling representative. Not to mention, once again challenging a fighter from a cross-town rival gym of sorts, Luttrell/Yee’s MMA. The added spice of local gym competition is unnecessary yet appetizing for a bout with so much implications going forward and with so much potential to spark a dying fight scene.

On one end of the spectrum, this fight is a game-changer for both competitors. A win for Urso cements his claim to being “next-up” so-to-speak for that UFC promotion. At the very least, it propels Urso to the next echelon of talent where he is assured to fight in a full-fledged premier promotion that most-likely has a “feeder” label for the UFC. For Espinosa, the win is a “marquee” win that puts him on the map. Sure, Espinosa knocked off previously undefeated and highly touted-touted prospect “Barata” de Freitas in 2014, but that win wasn’t enough to truly bring the attention Espinosa desired. A win over Urso does just that, as Urso is viewed by most as one call away from the UFC ranks. A victory for Espinosa may get him a feature bout on a national promotion and get him one fight closer to his dream of making it to the UFC’s Flyweight Division.

A loss for either fighter would be of great significance. Espinosa cannot afford a loss during his run towards the UFC as a few losses above his weight class has impacted his W-L record. At 7-5, Espinosa would only have  2 more wins than losses. For Urso, it isn’t as much about wins and losses as it is when the losses have occurred. If Urso drops to 8-3, all three career set-backs will have occurred when Urso’s stock has been the highest. 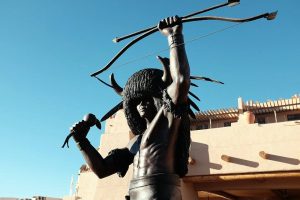 The beautiful Buffalo Thunder Resort & Casino will be the host site for arguably one of the area’s most prolific match-up between two highly-touted prospects.

On the second side of the spectrum, this fight is bringing some needed excitement to the New Mexico fight scene. While Urso hasn’t been as vocal as Espinosa, the intrigue of the banter and the anticipation of the match-up is developing some local buzz and we are still just under one-month until show time. 2015 was a quiet year to say the least and this fight could be what is needed to revitalize the local crowds and spark their interest to drive them back to purchasing event tickets and getting back inside local venues.

The fight goes down on February 13th. While the following day is all about love, the day prior will be one of little love lost in a local fight with ramifications so great the year of combat sports in New Mexico may take shape during the scheduled 15-minute battle.

A rare case of exceptional match-making (though Espinosa may have done most of this work on his own) and a rivalry that locals can have fun with. Are you Team Urso or Team Espinosa?

For more event information, read a feature from this weekend detailing the fight card for this upcoming event.