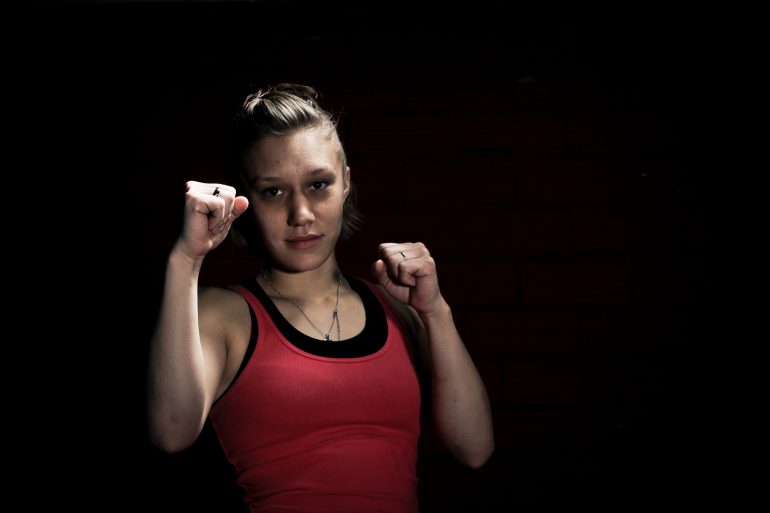 Another Invicta FC bout, another opponent bullied into defeat.

FIT NHB and New Mexico Wildbunch’s Amber “The Bully Brown” (6-1) defeated Shino VanHoose in the first round via a guillotine choke during the main card of last night’s Invicta FC 15. The victory was the fourth straight for Brown, third under the Invicta FC banner; it was also the second straight finish for Brown as she has now secured two submission victories, a guillotine choke and rear-naked choke in her two most recent outings.

During the live broadcast on UFC Fight Pass, commentator and Invicta FC match-maker Julie Kedzie alluded to the idea that Brown would have been the number one contender for the Atomweight Title if she had gained this victory over Lisa Ellis, Brown’s original opponent until Ellis was forced out of the bout leaving Brown with a short-notice opponent.

It didn’t stop Brown from imposing her will via her signature style of bullying opponents around the cage. Brown did what was expected of her regardless of the opponent, she applied pressure even when she succumbed to a takedown as she immediately went to work hunting for the guillotine choke. At 2:36 of the first round, Brown secured the tap-out and a confident Brown would immediately call for a title shot against Ayaka Hamasaki (12-1).

It is hard to argue against a title shot for Brown considering her streak of impressive performances but it is much more simple than that line of reasoning. The performances in Brown’s last outings have propelled her up the Atomweight ranks. Currently, the Atomweights you could argue are higher ranked than Brown are former Champion Herica Tiburcio, Mei Yamaguchi, and Naho Sugiyama. All of three of those woman have squared off with Hamasaki in her last three bouts and all three have been defeated in their respective match-ups.

The case for a fresh challenger is an appealing one. If Invicta FC doesn’t book a Tiburcio/Hamasaki re-match being that their bout ended via Split Decision, it is hard to argue for a better number one contender than Amber Brown.

It has been an impressive coming out party for Brown in this past six-month span. While Brown has always been on the map since her epic upset over Kikuyo Ishikawa in 2013, these last several months have truly cemented Brown’s status as one of the best rising stars in all of WMMA and set her on a path towards the Invicta FC Title.

Who else thinks Brown should get the next shot at the Atomweight Title and if she gets her wish, can she dethrone the Champion? If Brown’s start to 2016 is any indication, the Atomweight Division may not be a “Bully-Free” zone inside the Invicta FC cage.