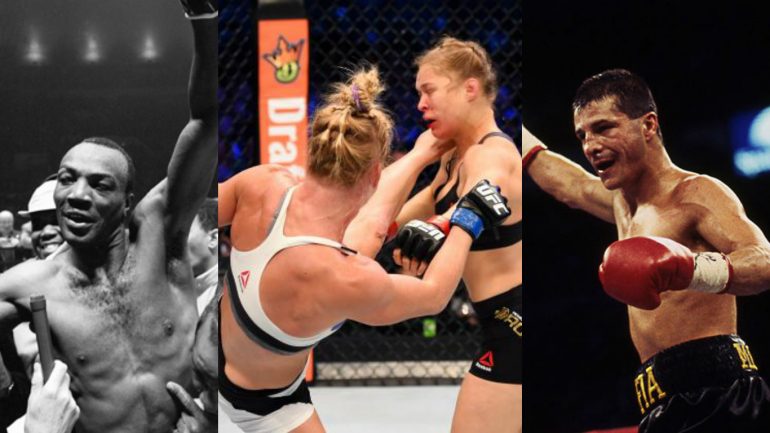 Where does Holly Holm’s KO of Ronda Rousey rank on our list of greatest Burqueño championship bout knockouts?

Burqueños have been holding their heads up high and have been thinking they’re allll baaaad since the devastating head kick knockout blow that Albuquerque’s Holly Holm (10-0) delivered to the previously undefeated Ronda Rousey (12-1) en route to claiming the UFC Bantamweight title at UFC 193 this past Saturday night.

Boxers and mixed martial artists from the city of Albuquerque have had their share of knockout wins in championship fights in both mixed martial arts and boxing. SWFight.com decided to take a look at some of the most brutal and historical knockout victories in title fights involving Albuquerque born, and bred fighters.

Date: Mar. 8, 1997
Location: Albuquerque, NM, Albuquerque Convention Center
Just four months before his historical bout against Johnny Tapia, a 22-year-old Danny Romero would defend his IBF Super Flyweight Title for the second time in front of his hometown fans when he faced South African Jaji Sibali. Romero went into this fight, the 31st of his career, with an unfathomable 87% knockout rate in wins.

Date: Oct. 12, 1994
Location: Albuquerque, NM, The Pit
Ring announcer Michael Buffer set the scene, “Ladies and gentleman, from la casa de los Lobos, The Pit, here at the University of New Mexico… Let’s get ready to ruuuumble!” There was nothing that was going to stop Albuquerque’s favorite son, Johnny Tapia, from claiming his first world title in front of his hometown… not even the gutsy Salvadorian Henry Martinez who was participating in his 19th and final fight of his career. The official result was a technical knockout win for Tapia but who are we kidding referee Dennis Nelson could have easily counted to ten.

Date: Apr. 7, 1972
Location: Miami Beach, Florida, Convention Center
“‘Yap, yap, yap, yap!’, that’s all I remember hearing him say. I never wanted to hurt anyone as much as I wanted to hurt Rondo,” said Albuquerque’s Bob Foster in an interview we conducted with him early last year. The bout between he and Venezuelan Vicente Rondon was a unification bout for the WBC and WBA Light Heavyweight titles. Foster was unexpectedly stripped of the latter belt the year before. Enraged at the sanctioning body, he took it out on Rondon and reclaimed the belt…

Date: May 24, 1968
Location: New York, New York, Madison Square Garden
This would be the true start of a legendary Hall of Fame career for Bob Foster. He came into the bout with Dick Tiger favored and looking to become the first person raised in New Mexico (*cough, cough* Albuquerque’s South Valley– I love to plug my hood any chance I get) to claim a world championship which he did in dramatic fashion. Foster would defend his light heavyweight crown a total of 14 times between 1968 and 1974.

Date: Nov. 14, 2015
Location: Melbourne, Australia, Etihad Stadium
It was the kick heard, seen, and memed all over the world. The sportsbooks didn’t give Albuquerque native Holly Holm much of a chance but bettors backed her late and made a killing off Las Vegas. Using her world championship boxing, and kickboxing technique, Holm was able to outclass the UFC Bantamweight champion and set up one of the most brutal knockouts in UFC championship history.