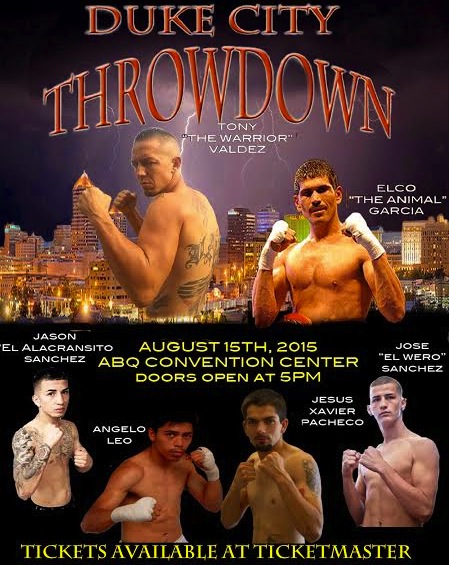 There’s no doubt about it, Española’s Tony Valdez always makes for entertaining fights but after his rematch Saturday at the Albuquerque Convention Center against Gilberto Mendoza, he found himself in the middle of a very controversial decision.

Early on in the contest, Valdez (8-4-6, 7KOs) set the tone by implementing a heavy body attack. The Modesto, California fighter, Mendoza (5-4-2, 1KO), would have a bit of trouble developing a rhythm in the first round but would find a groove in the second, positioning himself to land strong hooks.

He would try to continue to force the action in the third but flurries from Valdez would put a stop to several advances.

A Mendoza low blow to start the fourth would appear to take most of the wind out of Valdez’s sails. The Californian would take advantage of his wounded opponent and force him back most of the round.

Valdez would return the favor in the next round, his low blow appearing to do more damage than Mendoza’s. After a two minute break the action resumed with Valdez being the aggressor appearing to regain the momentum he had earlier in the fight.

The resurgence would be brief as Mendoza would land a hard right hand to Valdez’s left temple sending Valdez to the canvass causing a huge swing in a round that was expected to go to the New Mexican.

There was no let up from Mendoza in the final stanza. Knowing he was in enemy territory he took the fight to Valdez who did his best to counter the aggressive advances.

In the end, the visiting fighter looked as though he closed the show but failing to end the contest early left it in the hands of the judges.

Astonishingly, the same exact scores rendered in their first contest back in May would be read to the estimated crowd of a little over 500 this Saturday night albeit without identifying the beneficiary of two of the scores but it was obvious each won a card when it was realized the fight ended in a split draw.

SWFight.com visited the New Mexico Athletic Commission table at the end of the bout to take a look at the cards. The breakdown of the scoring for this fight came as follows: an even 57-57 card from judge Anthony Romero, a 58-56 score for Mendoza from judge Chris Tellez and a nonplus score of 59-55 for Valdez from judge Ester Lopez.

“Believe me this is some BS,” said Mendoza in a post-fight interview.

“There [will] be no rematch,” he continued. “The first fight I whooped him, [Saturday] I whooped him too. Now what, for a third fight to be a draw again and to waste my time to come all the way over here? Nah, I’m ok. I don’t need this, I have better opportunities in my life.”

His tirade would continue with him taking shots at what he said he felt was an issue with the sports of boxing’s judging for hometown fighters.

“Boxing, this is how it is [for] everybody who is in their hometown, they’re always trying to protect [the hometown fighter] regardless if they get their ass beat. [The judges] always try to make them win or draw like you saw today,” said a flustered Mendoza after we pointed out that the 55-59 scorecard was not in his favor. “Tony’s a warrior, let him be a warrior but I’m not going to fight him again.”

For Valdez, it was the bewilderment of a sixth draw on his record that had most of his attention at the end of the fight.

“Another draw? ¡Qué bá!,”(¡Qué bárbaro! or Wow! for those not familiar with the northern New Mexican vernacular) said Valdez. “I saw that he came with a different game plan and obviously it didn’t work to his advantage… we got a draw.”

Valdez was not as dismissive when asked about a third fight with Mendoza.