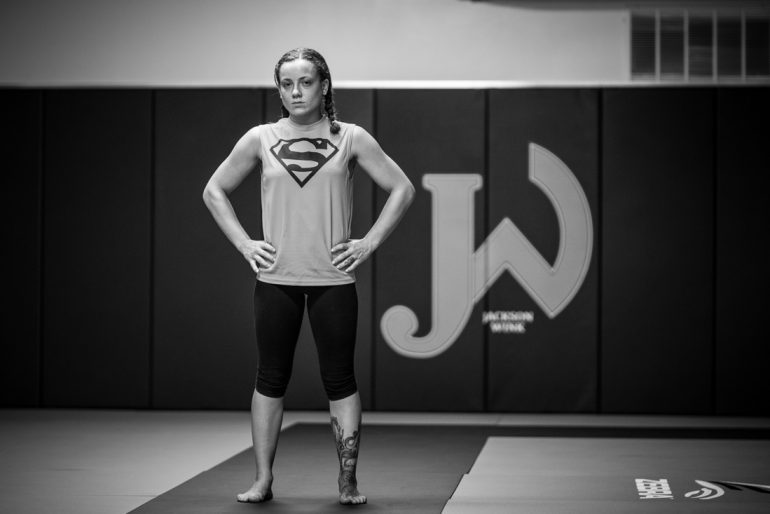 “I watched the first season of the “Ultimate Fighter” when I was a kid and always thought “Why don’t they have a female division?”, because if they did I’d kill it.” – Randee Morales

It wasn’t difficult to find intrigue in the story of “Shortstack” Randee Morales. The Jackson-Wink trained amateur MMA competitor may be 24-years old but she is not only full of life, she is full of life experience. Morales is still inexperienced in MMA with only two amateur fights and a few smokers notched onto her proverbial belt and still, the ambition and goals of this young competitor should definitely keep her on the radar as an up-and-comer capable of making some waves in the fight scene.

Morales (1-1) is heading down a route most fighters fail to travel. It is common practice in recent times for fighters to take a couple amateur fights, if any at all, and then make the jump to the professional ranks. It is uncommon to see an amateur fighter make it to the ten-fight mark; reasons vary from the desire to start being paid for fights to desire to make a splash as fast as possible to start their climb to the “big leagues”.

When Morales was 12-years old she competed for the first time in Tae Kwon Do; that was the age that head kicks would become legal. 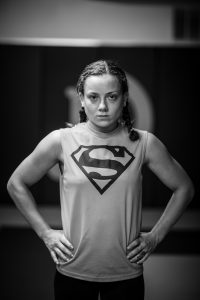 Morales cites the adrenaline of competition as a driving factor to justify her passion for combat sports. Competition would definitely be the normal way of life for Morales who grew up in a gym that her family owned. The gym that was first named Corrales Tae Kwon Do would also go on to do business as Pride Tae Kwon Do and the Corrales Mentor Center gave Morales a way to sharpen her athleticism and turn into a combat sport efficient tool set. Not only was Morales training, she was also coaching and would go on to eventually earn her second degree black belt in the martial art.

At sixteen years old Morales was already well on her way to chasing the blossoming sport of MMA and the women movement that was barely get its kickstart in the mainstream. She knew at that age that she wanted to compete in mixed martial arts but she wasn’t aware of any opportunities for women to start their career. At the time MMA was still a male dominated product and while WMMA existed, it definitely lacked the exposure it rightfully possesses today.

“When I got pregnant, I quit training. I was seventeen.” – Randee Morales

Teenage pregnancy will conjure up obstacles in anyone’s life regardless of that person’s lifestyle, hobbies, and career path. It may have thrown an even larger swerve than typical due to Morales’ desire to compete in a sport that is simply described as hand-to-hand combat.

Morales is now a mother to a six-year old daughter. She may be at the age where she is beginning to comprehend much more of the world around her but still may have trouble absorbing some of the more complicated life issues. One of those issues is that her mom, figuratively speaking, punches people in the face for sport.

“I think that she thinks it’s a little bit of a game.” – Randee Morales

Despite any obstacle that it may have caused, Morales is thankful of the how it all played it out. She had her child and she made it through some rough times during the years that would proceed. The birth of her daughter may have awarded her the time she unknowingly needed to be ready for the committment required for the ambition of chasing a professional combat sport career. Now a little older and more experienced in the world, Morales can now see the end goal. WMMA has boomed and the females of the MMA World are earning the same respect as their male counterparts. The ability to see the success of the women competitor’s drives Morales to make it to the level she has dreamed of for so many years.

“I’m not trying to play with my career. I love fighting and the feeling I get when I first start the fight is something unexplainable. It’s overwhelming but welcoming all at the same time. I feel like nothing else matters but the fight in front of me. Everything that doesn’t have to do with my fight dissolves into my subconscious mind and I am free from reality while I overcome the battle in front of me. It’s like a daydream.” – Randee Morales 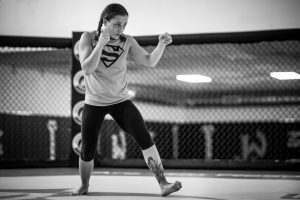 There always seems to be some poetic justice when a competitor who possesses the intellectual skills to explain their pre-fight emotion and still Morales touches on an interesting aspect of the mental aspect of MMA. When the cage door shuts prior to the fight’s opening bell you are left with two individuals of have trained for any amount of days, weeks, or months and has one goal in mind when that bell sounds; the objective is to incapacitate the other person before they succeed to do so on you and you are able to knock them completely out, strike them until they fail to intelligently defend, or force them to submit to some sort of painful limb manipulation or oxygen-defying choke.

A competitor must remain focused on the task at hand or they risk injury.  One must isolate every and anything else going on in their lives to ensure they are prepared for combat. Morales may have experience in this type of mental requirement. Being a teen mother essentially implies that she has the ability to turn the page on a whole new life seemingly overnight as the precedent for a seventeen year old being tasked the life-altering role of being a parent. Being a mother requires that Morales understand how important a single priority can be. In that cage, Morales understands that nothing else matters, in fact nothing else can matter, when competing inside the unforgiving confines of a cage.

In her last outing, Morales lost an entertaining bout in a featured bout for the Jackson’s MMA Series event at the Buffalo Thunder Resort & Casino back in February. While Morales struggled to get past the length of her opponent, she showed true heart in the face of adversity as she would continue to push forward searching for her offense from start to finish. Leg kicks may have been her best strike but that didn’t stop Morales throwing everything but the kitchen sink at her opponent.

Prior to that outing, Morales earned the victory in her debut that lasted less than a minute. Alyssa Garcia is an accomplished wrestler at the National level and she entered into her bout with Morales undefeated with a record of 2-0 as an amateur. Garcia needed less than three minutes to finish her first two opponents via strikes and it wouldn’t have been wrong to think that heading into the Morales vs. Garcia bout that the inexperienced debut fighter may have gone too far into deep waters in her first foray inside the cage.

It took one minute for Morales to make her own statement.

As expected, the accomplished wrestler would take Morales to the ground. Again, as would be expected from the technically-sound grappler, she moved to mount and began maneuvering to start her ground-and-pound. The local paper labeled Morales a “fiery whirlwind” as she was able to buck off the dominant fighter and move smoothly to the back where Morales would sink in her hooks and the fight-ending rear-naked choke.

“If I put in the work like I have been and I don’t perform or succeed then I don’t think it is a good idea to put myself through the physical damage necessary to maintain a professional career. I enjoy cage fighting and I don’t mind losing but I want it to be rare if at all. I also feel like if you are looking to go pro, a promoter isn’t going to want to promote a losing fighter.” – Randee Morales

Five years after her hiatus from training, Morales has now been training for two years with the Jackson-Wink team. Her skills have improved and she appears to be headed down a continued road of success. Not all that surprising when you note that Morales trains at one of the most renowned gyms in the world of which hosts some of the sport’s best fighters and coaches.

Even though it was aforementioned that women were now finding the same mainstream exposure of their male counterparts, it is still factual that the sport is dominated in terms of participants by males. In fact, the gym Morales spends her time is often filled by a heavy percentage of males. The males vs. females training together debate can be extensive and confusing but Morales insists that the training is actually beneficial to her.

“Men are huge and unrealistic. Women are very realistic because we are similarly matched with height and weight. Everyone that I train with is pretty controlled. Sometimes there are new guys that have less control but I am pretty tough and I don’t usually get hurt. They treat me like a tiny dude.” – Randee Morales 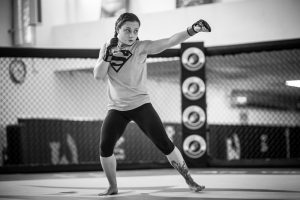 Morales fights again, for the third time in her amateur career. this weekend in Farmington for the Cage Fury promotion. She will look to get back on the winning track when she takes on Tabitha Trevino. The 105-pound Atomweight bout may not mean anything significant to her pro career, the bout has still brought the excitement for Morales as she prepares for the match-up. Morales acknowledges that she cannot underestimate Trevino despite feeling comfortable wherever the fight takes place.

Morales is admittedly in love with the stand-up aspect of combat but she maintains that her ground-and-pound and offensive grappling is fast and powerful. She is unafraid of hitting the mat and feels that she can be quick in securing a submission should it present itself during competition. She trains twice a day and maintains her health and conditioning as she continues to learn, spar, and improve on a daily basis.

While it may be premature to announce Morales as potentially the next women to stamp her mark in the sport in a State that has heavily attributed to the success of MMA and most specifically for this conversation, WMMA, it wouldn’t be out of left field to anticipate Morales rising through the ranks and finding herself where pioneers like Julie Kedzie and Angela Magana and superstars like Michelle Waterson, Amber Brown, and Holly Holm found themselves early on in their careers. All of those monumental names and iconic individuals once walked that line between being just another face in the MMA crowd and making her name one to remember.

If the confidence of Morales is an indicator we should be happy to have the opportunity to watch this young woman blossom from amateur fighter to professional fighters. I think it is clear she has the figurative “good head on the shoulders” necessary to pursue and accomplish her goals.

“I’m planning on bringing the pain for sure in this next fight. I want a strong amateur record and a good amount of experience before I turn pro, two years max.” Randee stated when asked about this weekend’s fight. When asked if MMA is what she desires as a career, she answered simply and appropriately, “If I’m good at it, yeah. I want to be great.”