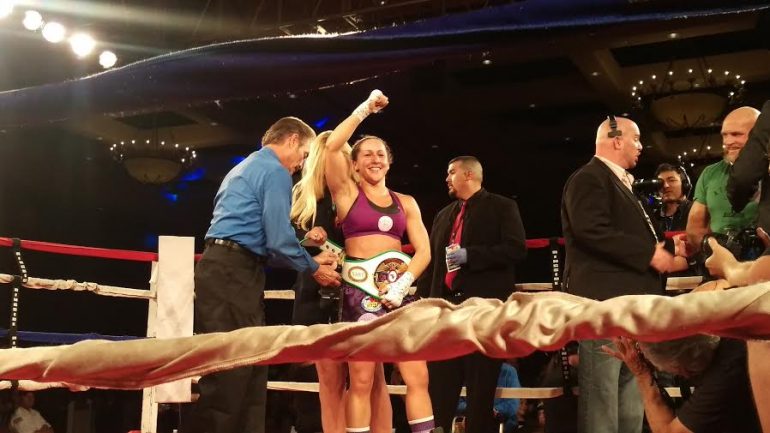 Brandon Holmes and Pat Holmes Jr. Win By TKO on ‘The Takeover’ Undercard

A crowd of just over 2,000 was on-hand Saturday night at the Buffalo Thunder Resort and Casino for a Holmes Boxing promoted card that featured a women’s NABF Light Flyweight title fight.

In the main event of the evening Albuquerque’s Jodie Esquibel and Mexico’s Mayela Perez provided high volume punching in a battle for the North American Boxing Federation Light Flyweight belt.

It would be Esquibel (7-8, 2KOs) who would dictate the pace of the bout early on by boxing well from the outside.

Perez (11-19-4, 4KOs), displayed a traditional Mexican style approach by continuously stalking and pressuring Esquibel around the ring. The visiting fighter had success in the middle rounds landing flush straights and hooks.

To her credit, Esquibel was able to take the massive blows.

The bout was filled with fouls on both sides; Esquibel was warned several times for using her forearms to push Perez while Perez was warned for low blows and hitting during the break. Neither fighter would see a point deduction from referee Rocky Burke.

Ironically, Esquibel would use the roughhousing tactic as motivation to rally in the last two rounds and earn the split decision from the judges