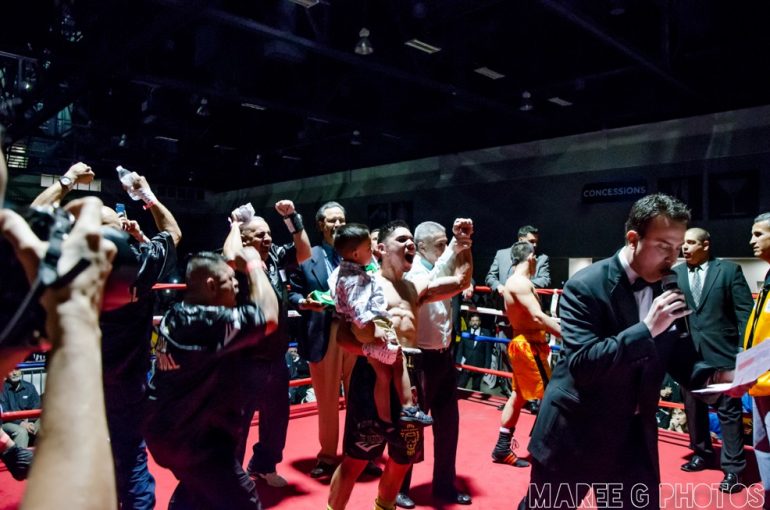 After digging himself into a hole early on, Albuquerque’s Josh Torres was able to outbox Filipino counterpart Ranee Ganoy, on his way to the WBC USNBC Super Lightweight championship, Saturday night at the Albuquerque Convention Center.

In front of crowd of about 1,600, Torres and Ganoy gave boxing fans a classical boxer versus puncher battle that lived up to the hype.

As expected, it was the 35-year-old Ganoy (36-12-2, 32KOs) that set the pace the first three rounds putting the pressure on his ten-year junior, Torres (14-3-2, 6KOs). Ganoy was able to stay tight with his shots landing lead left hooks and uppercuts to the backpedaling Torres.

The strongest and most crucial rally of Torres’ career would come in the middle rounds.

In the fourth, a less active Ganoy, would overcommit in his approach, exposing his head by leaning too far forward which allowed Torres to pick him off with short effective shots.

The speed advantage favored Torres both offensively and defensively. Telegraphed punches from Ganoy, gave way for better defense from Torres who shielded himself from powerful hooks.

“I knew that I could block a majority of his shots because he was throwing them wide,” said Torres.

In the sixth, Torres would finally start to follow up his lead left jab with straight rights.

Despite appearing to have the advantage in the middle of combinations, Torres would rarely commit to more than four shots and would instead, step back to gather himself, giving the clear indication that he did not want to engage with Ganoy in a possible slugfest.

Torres, turned into enforcer in the seventh, putting pressure on Ganoy the entire round occasionally exposing himself for an opportunity to gain a better position on the inside to land short combinations.

Coming back to life in the eighth, Ganoy developed a rhythm by changing levels with his deliveries. Torrres would not be discouraged by Ganoy’s resurgence doing his best to bully Ganoy, pushing him against the ropes and landing a head-body combo.

A classic moment in the fight came at the end of stanza as both men simultaneously landed titanic right hands. A deer-in-the-headlights look set over the faces of both men, time appearing to freeze as they blankly stared at each other for the last three seconds of the round demonstrating the effects of the respective gargantuan shots.

“There were times where I felt hurt,” said Torres. “I knew I had to dig deep I knew how bad I wanted that green belt.”

The determination shown by Ganoy in the ninth momentarily swung the pendulum of the bout his way. Four consecutive power punches reset the fight to roles they played earlier in the contest.

The dominating ninth would be the last hurrah for Ganoy as in the 10th and final round the men showed clear signs of fatigue neither one being able to put a strong combination. This permitted Torres to box and not expose himself to any massive shots.

In that last round, both men would beat their chests and extend one hand toward the sky in hopes to earn the nod from the judges in a very close fight.

“I can’t wait to show the kids… and be an inspiration,” said Torres who grew up in Albuquerque’s South Valley. “I started off fighting on the ditch banks and now I have a green belt on my shoulders.”

The evening’s co-main event between Albuquerque’s Jose Osorio (3-2-1, 2KOs) and Alex Hipolito (3-3-1, 2KOs) of Plainview, Texas was a great precursor to the final bout.

It was a back and forth contest with both men demonstrating very good technique and poise, weathering each others storms in every round of the their six round contest.

Hipolito’s ability to find his range early on gave him the advantage in the first half of the fight.

Heeding his corner’s instructions in the second half of bout, Osorio implemented a strong body attack that slowed Hipolito down in the fourth and fifth.

In the final round, likely knowing he was behind on the cards in his opponents hometown, Hipolito resorts to power punches, staggering Osorio momentarily with a big right hook behind the ear.

Osorio would respond later in the round with two consecutive right uppercuts. The round  would finish in the pocket in a battle won by whomever got their combinations off first.

All three judges would render the same result, 57-57 a unanimous decision draw. SWFight.com also had it an even fight.