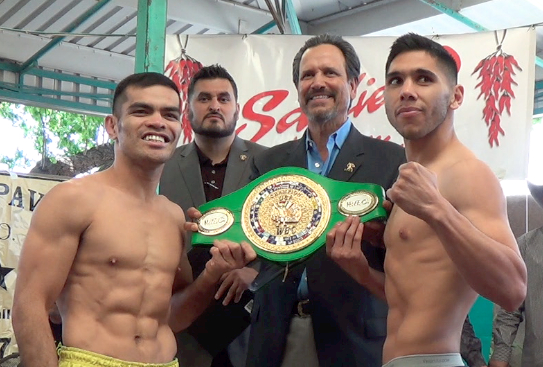 For any highly anticipated fight the phrases: Can’t miss!, Possible Fight of the Year, and even, There should be some good chingasos, are always thrown around by promoters and fans alike but bouts rarely live up to the hype. Tonight’s title fight between Josh Torres and Ranee Ganoy will deliver one way or another.

The native New Mexican, Torres (13-3-2, 6KOs), and Ganoy (36-11-2, 32KOs) of the Philippines, are expected to give the New Mexico boxing scene a much needed heartbeat when they face each other in tonight’s WBC USNBC Super Lightweight championship main event tonight at the Albuquerque Convention Center.

A crowd of nearly 2,000 is expected to be on hand to see the prelude, of sorts, to May 2nd’s United States vs. the Philippines superfight between Floyd Mayweather and Manny Pacquiao.

Not since former pound for pound queen, Holly Holm retired from the sport have we seen that type formidably-sized crowd in the Albuquerque-metro.

The winner of tonight’s bout will likely receive consideration for a top-25 Super Lightweight world rankings from the World Boxing Council.

Somethings to consider in tonight’s contest.

Age:
–At 25-years-old, Torres, is 10 years the junior of Ganoy. His stamina needs to be there in the late rounds if he’s unable to get to Ganoy early.
Experience:
–Excluding Torres’ no contest, his fights have gone an average of 5.1 rounds while Ganoy’s have gone an average of 4.6 rounds.
-Ganoy has 30 more fights than Torres and has fought in nine regional championships to Torres’ three.
Home Court Advantage: Will be pivotal with this large of a crowd.
-One of the more popular fighters in Albuquerque, Torres surprisingly lost the crowd in his last outing against Jose Marrufo. However, ticket purchases from the Team Pitbull contingent have been strong for tonight’s bout.
-In his first bout in the US this past November, Ganoy had solid support on-hand, primarily due to his manager and trainer’s, Jacob Maes and Sergio Chavez, popularity in the local fight scene.
Pace:
-Will likely be more important for Torres to set. Ganoy showed poise in last outing against Shawn Gallegos. A lack of pressure from his opponent allowed him to put power combinations together. To avoid this Torres will likely have to be a workhorse for the duration of the contest boxing intelligently to throw Ganoy’s timing off.
-If you think the elevation will get to Ganoy, you can throw that out the window, he’s lived in Albuquerque for several months and has been tested in conditioning drills by Momma D, a trainer known to push her athletes to extreme limits.
Power:
-The advantage here undeniably goes to Ganoy. In his US-debut last year versus New Mexico’s Gallegos he was able to earn four knockdowns. An outstanding 88% of Ganoy’s wins have come by way of knockout while the number is almost half of that for Torres at 46%.
-Torres has never been stopped while Ganoy has succumbed to (T)KOs six times, the last being his lone loss of his last 20 fights in 2008.
Rounds: This match is set for 10-rounds, a distance which Torres has only seen once during his WBC Youth Silver welterweight title in 2013 versus Roc Nation’s Dusty Hernandez-Harrison. Ganoy has gone 10 or more rounds five times in his career; the last coming way back in 2007.

Based off the factors above SWFight.com has set tonight’s odds at:
Ranee Ganoy -210
Josh Torres +185