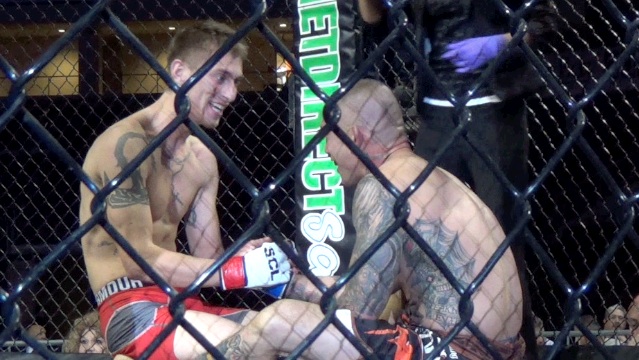 A crowd of about 400 was on hand to welcome Sparta Combat League’s first New Mexico card, Army vs. Marines-NM, Friday night at the Santa Ana Star Center in Rio Rancho, New Mexico.

In the evening’s main event, Albuquerque’s Conrad Padilla (5-2) took on relatively unknown Clayton Wimer (3-0); a Sherdog.com profile does not even exist for him.

In the first stanza, the 6’3’’ South Dakotan would use his arm length advantage to neutralize the 5’6’‘, Padilla’s advances. Padilla would however have success landing kicks to Wimer’s lead leg.

After what was a stalemate for most of the round, Padilla would land a big over the top right sending Wimer covering for defense against the cage. The altercation would lead to a battle on the ground which would be heavily controlled by Wimer.

To control the second round, Padilla relied on single shots and combinations to keep Wimer guessing. The plan proved to be effective as Wimer was unable to develop a rhythm.

Later in the round, on two separate instances, a Padilla counter left hook would floor Wimer. The second would prove to be the most effective knocking Wimer’s mouthpiece out and leading a ground and pound finish of the round for Padilla.

An even fight would go to a decisive third round.

Having and edge standing for the commencement of round Padilla would find himself tied up with Wimer and his back against the cage.

He would turn his opponent around to take control of the cage position and immediately force a takedown.

A few seconds after the two men hit the ground, Wimer immediately took top position and after two minutes of patience and tactical work would sink in a rear-naked choke, roll to his back and all while ensuring that a strong body triangle was in place.

Unable to escape the hold, Padilla would be forced to tap at the 03:04 mark of the third round.

Note: Frank Lester vs. Joe Miles did not take place. Lester has been rescheduled to fight in a Sparta Combat League event in Denver, Colorado