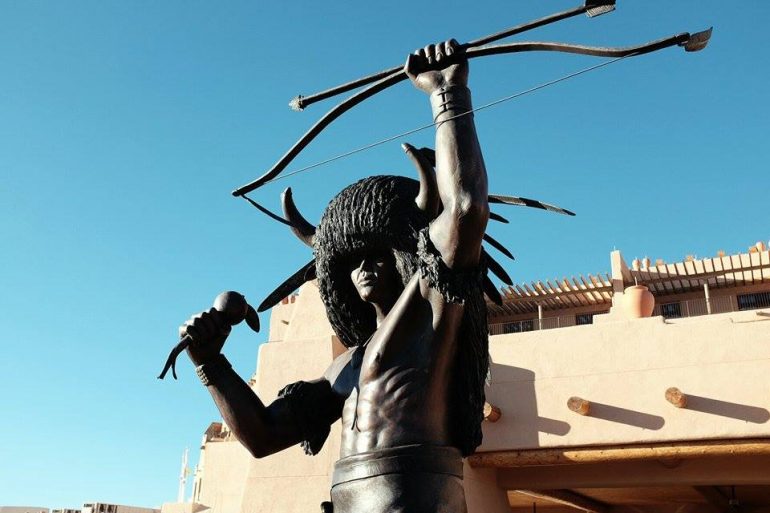 It took Nick Urso four seconds to sprint from the Buffalo Thunder Resort and Casino Ballroom lobby to the cage during his introduction for his fight against Josh Montoya at Jackson’s MMA Series XIV on Saturday night. 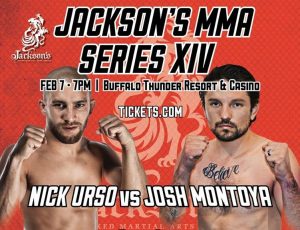 “I’ve been on the shelf for a while and I’ve been itching to fight and ready to go,” said Jackson’s MMA fighter Urso (8-2) post-fight of his rushed entrance.

Ironically, it would be Montoya (11-9), in front of his hometown fans that sprinted out of his corner and would test the waters early on by gauging his distance with kicks.

The shorter Urso, did a good job nullifying the height and length disadvantage by closing the distance and staying tight with strikes once on the inside.

A low blow from Montoya would break the tension. After a short break to allow Urso to recover from the illegal strike a kickboxing match would ensue with Urso favoring three punch combinations from the southpaw stance and Montoya striking Urso’s lead leg repeatedly.

Montoya’s pace would increase throwing the Jackson’s MMA fighter’s timing off. This work would lead to a Montoya takedown which would eventually end the round.

Much more relaxed in the second, Urso, would put on a dominating performance, starting off by stalking the Santa Fe fighter around the cage with boxing combinations and forcing the retreating fighter to throw a lazy leg kick in defense which Urso would easily catch and use to assist him with the made-to-order takedown.

The subsequent ground work would not come easy as Montoya would try his best to hook Urso’s limbs to tame him. With a free left arm, Urso would strike Montoya with a sharp elbow causing a severe cut and immediate swelling under the right eye.

“Honestly, I thought that was the end of it,” said Urso post-fight. “I don’t even know if the freakin’ doctor looked at it.”

(To his point there were a few instances where the doctor could have approached separate fights to check on fighters and never did.)

A decisive third round would be the most compelling of the match.

Both men would commence the final round very tactical, each trying to finish the others combination with a shot up the middle.

Urso’s advances would force Montoya to retreat but now the 20-fighter veteran with two shots up the center. The pressure would however have him lose his rhythm. A paced Urso began to work the inside leg.

Montoya responded by oddly and serenely walking right into Urso, leading to another easy takedown.

From that point, two different battles based off your interpretation would be fought.

Urso wrestling would keep the action primarily on the ground but Montoya would exude a large amount of energy defending off his back with elbows to the side and crown of Urso’s head while also putting in his share of submission attempts. This included a deep triangle that Urso was able to slip out of.

The contest ended with Urso ripping leg kicks as Montoya lay on his back.

When the unanimous decision was read, it made clear that Montoya’s kickboxing in the first round and work off his back in the third were not enough for two of the judges to even award him a round. The final tabulations were 30-27, 30-27, and 29-28 for Urso.

“I’ve cut a couple of people in fights but that was probably the worst,” said Urso. “He looked like cyclops out there. The guy is tough as nails.”

Heredia Holds on and Stops Sparks 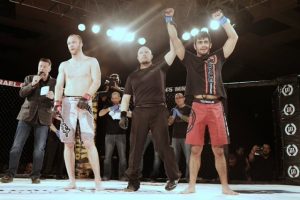 The co-main event of the evening between Jon Sparks and Yomi Heredia was a tale of two rounds.

A short night would appear to be in order when Sparks’ chin would land flush on Heredia’s face, momentarily dropping the visiting fighter from Colorado. Blood would pour from Heredia’s nose turning both Sparks’ torso and the canvass into a Jackson Pollock painting.

Another head kick later in the round dropped Heredia for a second time. Sparks immediately looked to take Heredia’s back to flatten him out. Displaying incredible will, Heredia forced himself to top position landing some key shots to end the round.

A lengthy delay between rounds allowed event staff to clean up Heredia’s blood and gave the Grizzly MMA product the necessary break to recover from the first round. His second round featured greater success from his part implementing a strong ground and pound that would open up a kimura submission that ended that battle with just 16 seconds left.

Parabellum’s MMA’s Cynthia Arceo showcased her athleticism against and tough and formerly undefeated Randee Morales in the amateur featured bout which ended by technical knockout in the second round.

Arceo, five inches taller than Morales used ever inch of advantage to out strike and overwhelm her opponent from a plethora of angles in the very first fight of her MMA amateur career.

It was again her first fight but her strong karate background and athleticism could make Arceo a name worth your recognition.