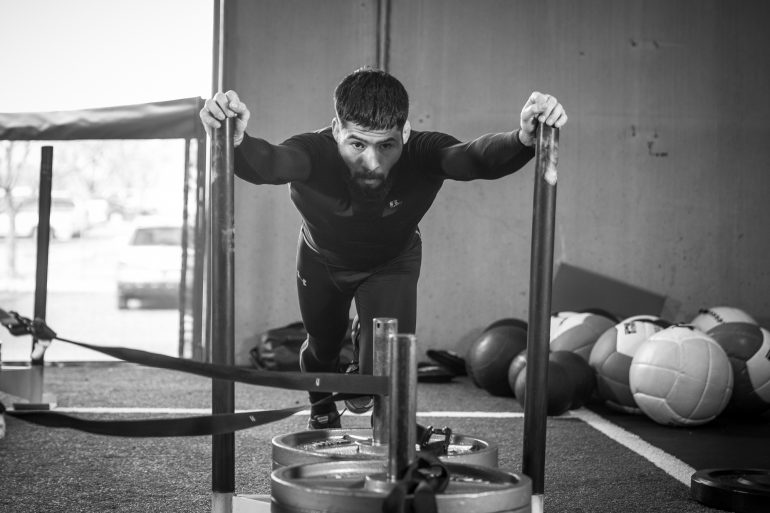 Last October, Damacio Page was riding a viral and social media wave. He had just delivered one of the most brutal MMA knockouts seen in 2014 against Brian Hall at Legacy Fighting Championships 36  in front of his hometown fans.

Page (19-9 MMA record), who in 2014 made a move from bantamweight to the lighter flyweight division, hoped the performance would immediately draw a call from UFC matchmakers. That call has yet to reach his phone but that is not stopping Page from staying active.

“For so long I put faith and trust in people… I want them to help me out,” says Page about another chance with the UFC.

“I’m too old for that, I’m here to do it by myself,” says the 32-year-old Page about finding opportunities to stay active as a fighter.

Page’s first boxing bout will be a catchweight of 132lbs Saturday on the Holmes Boxing “Cold War” card at the Buffalo Thunder Resort and Casino. However, Page’s recent success in MMA and devastating knockout of the year highlight may be hurting his chances of finding an opponent for the bout.

“I think he can knockout any heavyweight,” says Page’s boxing coach Sergio Chavez about his fighter’s power. “They think the bigger [boxing] glove is going to make a difference–it won’t.”

At last word Page does not have an opponent scheduled for Saturday. This week potential opponents Jose Mariscal (we assume from Argentina) and Adam McGurk, an MMA fighter from El Paso who had have made his own boxing debut, have withdrawn their names as foes for Saturday’s fight against Page for undisclosed reasons.