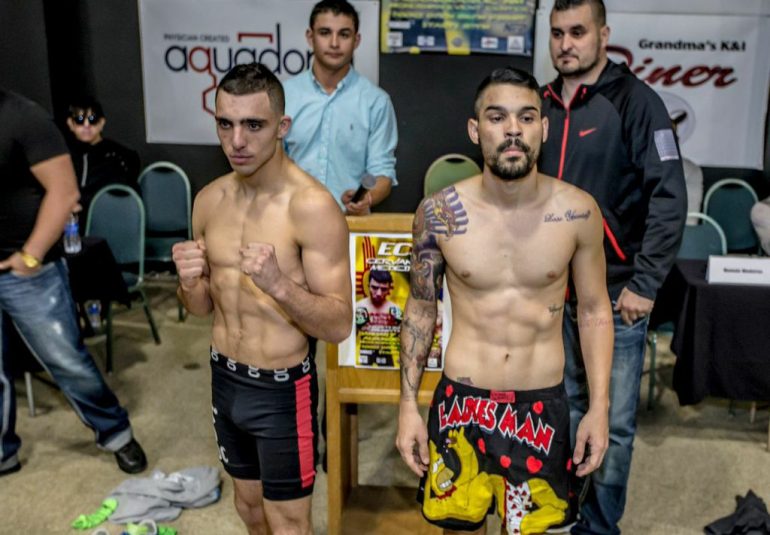 A crowd of about 400 was treated to a professional-amateur mixed martial arts card at the McKernan Events Center which did not have its shortage of finishes. The card, Elite Combat Series 1 the first promoted by Eleven O2 Promotions only needed the judges rendering in two fights, to the crowd’s pleasure the fighters took care of their own business for most of the night. 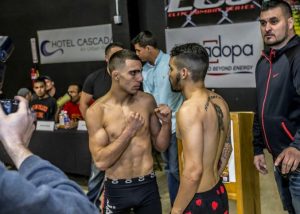 In the main event of the evening Luttrell MMA’s Stephen Cervantes earned his first career victory via stoppage by using a strength advantage over Brazilian Romulo Vilhena Medeiros in their bantamweight bout.

After a Medeiros kick was caught by Cervantes, the Brazilian found himself being forced against the cage and being punished by knees to his thigh along with a combination of pummeling foot-stomps.

Once the bout came back to the center of the cage, Cervantes would cleverly feint a Superman-punch and shoot low and eventually after a tussle would reach his goal of taking Medeiros to the ground.

Cervantes would land short shots to the head and body forcing Medeiros to move his hands to defend himself but leaving an opening for the Albuquerque fighter to implement a rear-naked choke.

Willfully, Cervantes rolled to his back bringing Medeiros with him, deepening the hold with his arms assisting the submission was a tight body triangle that stretched his opponent out. The arms around the neck were so tight that the Brazilian was forced to tap at the 02:01 mark of the first round.

“After the first grappling exchange on the cage I felt that I had the strength dominance,” said Cervantes post-fight.

“I really didn’t take any damage today so I’d like to get another fight as soon as possible,” continued Cervantes who earned his first victory via stoppage, improving to 3-0.

Tenneson Takes Out Whitney in Two

In the co-main event Jackson’s MMA’s Andrew Tenneson continued to show his technical striking and grappling against a very game Joel Whitney of Santa Fe BJJ.

The start of the bout saw a kickboxing match with Tenneson picking his shots while Whitney stayed busy attempting to throw Tenneson off with busy hands, specifically a jab up the middle which occasionally found success but displayed minimal power.

Tenneson finished the round with top position. Whitney would return the favor early in the second when a lazy left hook from Tenneson would miss its mark and leave him open for a takedown.

Tenneson would maneuver into an omoplata and would work it for an extended amount of time cranking and twisting Whitney’s arm behind his back all the way up to his head. Whitney would strive through the hold and would attempt to roll out of it. Tenneson’s initial attempts of a rear-naked choke would fail as Whitney defended well but continued to find himself in a disadvantaged position.

Very high on his opponents back but having the advantage of him being on his knees hunched over, Tenneson would find room in a compact space to administer the fight ending rear-naked choke.

The most dramatic bout of the evening without a doubt was that between Albuquerque’s Francisco Marin and El Paso’s Armando Rivas.

In a fight mostly controlled by Rivas’ wrestling, Marin found himself disadvantaged on the ground unable to work his kickboxing for the heart of the fight. 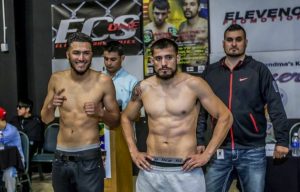 Halfway through the second round Marin found his opportunity with a huge head kick followed by a straight right that staggered Rivas forcing him to retreat against the cage. In a desperation move Rivas would wrap his arms around Marin taking him to the ground and dominating the rest of the round.

A great sense of frustration could be seen from Marin’s trainer Grandmaster Melcor Chavez. A discontent Marin would sit on his stool back against the cage almost appearing to stare through his cornerman’s tirade. Two open handed slaps to the face would only subtly draw Marin’s attention.

This would set the scene for a controversial ending. Marin would land a solid inside left leg kick near Rivas’ groin. The blow forced an immediate reaction from the Texan and as he leaned forward to grab his groin Marin, still in the middle of his kicking combination, would land a devastating blow to Rivas’ head forcing the referee to call a halt to the action.

The stoppage caused hysteria from Marin supporters while Rivas’ cornermen would berate the referee forcing the commission to calm the men down.

“I thought the referee gave me a time to recuperate from the shot that hit me low,” said Rivas post-fight.

Rivas’ corner confirmed that they have issued a formal complaint with the New Mexico State Athletic Commission to have the fight overturned to a no-contest.

“I thought I had won the first two rounds,” said Rivas. “I don’t think [the kick to the groin] was a desperation move on his part but I could care less about the no-contest, I want to win so let’s do it again sometime.”