2014 SWFight.com Boxing: Fight of the Year, Shabazz vs. Cardona 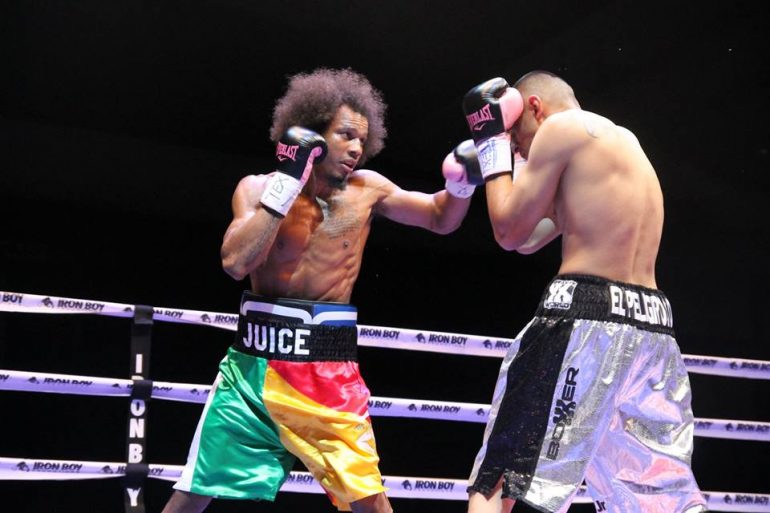 Siju Shabazz (L) vs. Izaac Cardona (R) put on the fight of the year at the El Paso County Coliseum in October. Photo: Brandon Pina

The Albuquerque-area gave us a thrilling contest between Josh Torres and Jose Marrufo, a bout that could have gone either way, Maurice Louishome and Arturo Crespin gave us a fight with so much drama that Univision would have aired it as a seven-part novela mini-series. At the beginning of the year, a fight we had been salivating over between Oscar Valenzuela and Jose Salinas lived up to the hype in El Paso, Texas.

But for our fight of the year we stay down south in El Paso more specifically Iron Boy 16’s main event where record wise, Las Cruces, N.M.’s Siju Shabazz vs. Colorado Springs, C.O.’s Izaac Cardona was one of the most anticipated bouts of the year. (Photo: Brandon Pina)

It would be Shabazz’s finesse against Cardona’s stalking style which accompanied him with a perfect KO record.

Shabazz, fighting close to his hometown of Las Cruces, would be forced to rally after suffering the a shocking knockdown halfway through the bout.

Here’s a mini-recap of the bout as reported by our colleague Austin Kileen with BillyCBoxing. To view Killeen’s full recap please visit http://www.bit.ly/KilleensKorner:

“In the main event, Siju Shabazz (6-1-0, 5 KO’s) 168 lbs. of Phoenix, AZ won by split decision over Izaac Cardona (9-1-0, 9 KO’s) 167 ¾ of Colorado Springs, CO.  In the opening round Shabazz did well moving laterally while scoring with a lighting fast left jab.  In the last minute of the round, Shabazz started sitting down on his punches only to be rocked by a Cardona left hook.  Luckily there were only a few seconds remaining before the bell rang.

A murderous puncher in his own right, Shabazz’s punches seemingly had no effect on his rival.  Cutting the ring off Cardona trapped his opponent on the ropes right above me; where he exploded a left hook off Siju’s jaw.  The Phoenix import [Shabazz now resides in Phoenix, Az] fell like the stock market crash of 1929.  Rising on unsteady legs, Shabazz employed every defensive skill in his bag of tricks to finish the second round.

The final round was a classic, with the busier Shabazz doing well until he started sitting down on his punches.  Left hooks and clubbing rights by Cardona once again had his rival doing the funky chicken dance in the final thirty seconds of the stanza.  This fight was a classic boxer versus puncher matchup, providing those in attendance with everything they could ever hope to witness in a boxing match!

You could have heard a pin drop as the anxious crowd waited for the announcer to read the score cards.  Two judges had it 57-56 Shabazz, while the third arbitrator had the same score but for Cardona.  Shabazz was the favorite of the fans, meaning the verdict was well received by those in attendance.  I hope somebody recorded this classic as I would love to watch this matchup of power versus skill again.”

Here’s to hoping that promoters spoil us in 2015 providing just as exciting bouts as the best bouts of 2014 did.