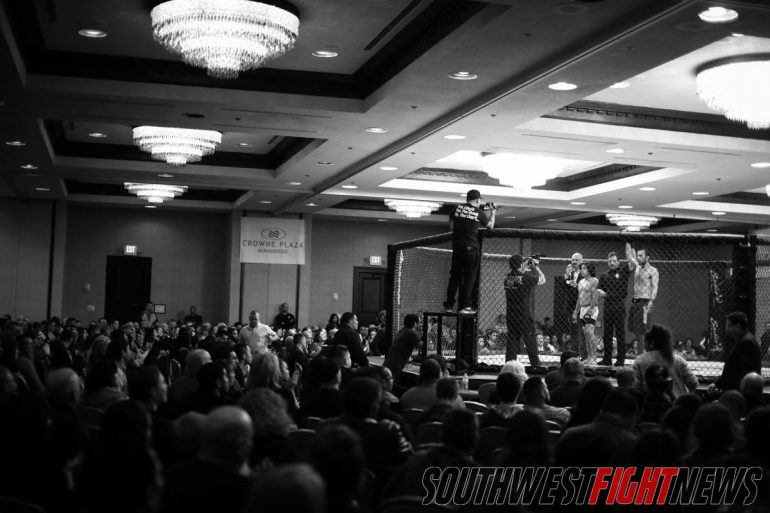 Rewind almost ten years ago and the King of the Cage promotion was live inside the Socorro National Guard Armory for an event simply named “Socorro”. Well-known local Richard Montano and future UFC top contender John Dodson worked atop the show’s billing in respective bouts against tough local competition but would leave the event with opposite outcomes. Fast forward back to present time and “Fierce” will be held inside the Socorro Entertainment Center on January 24th for the town’s biggest show in several years.

Located in the Southern parts of the State, Socorro will play host to a fight card full of fighters from El Paso and Las Cruces. Currently billed as one of the featured bouts, El Paso’s Oscar de La Parra and Utah’s Oliver Parker will meet up in a 170-pound showdown. Even though only two fights have been teased by the promotion, the second bout featuring Nathaniel “Game Dog” Baker and gifted grappler Jesus Urbina may be the show stealer as the Flyweights are matched very competitively.

Arguably the most significant announcement for the show is that talented amateur Cristobal “Quito” Chavez is scheduled to make his highly anticipated professional debut. The grappling specialist went 6-0 during his amateur campaign including wins over KOTC Amateur Champion Robert Herrera, amateur standout Brent James and the very tough Kevin Wirth. An opponent has yet to be announced for Chavez.

Stay tuned to Southwest Fight News for more on the “Fierce” fight card and coverage of the show and the scheduled fighters.