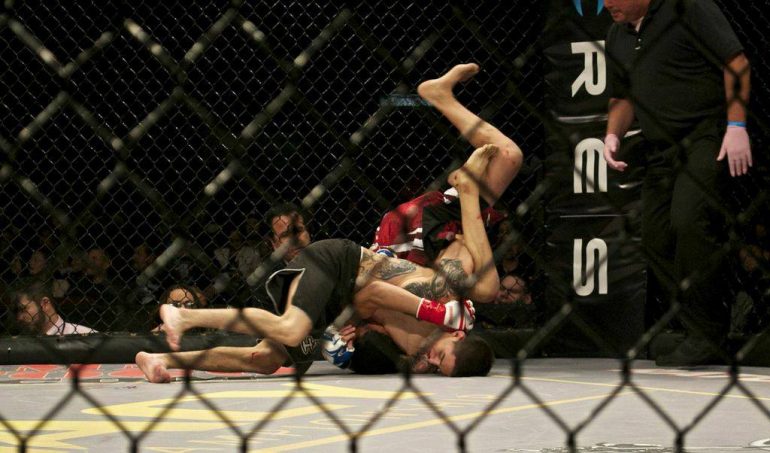 The “Submission of the Year” from 2013 really set the bar high for 2014 as Adrian Cruz and his extremely rare scarf-hold arm-lock submission really set a standard for degree of difficulty necessary to win our annual award. However, an amateur fighter was able to hit that bar and ensure that next year, 2015 will have a similar standard for the staff here at SWFight to determine as the jaw-dropping submission of the year.

Legacy FC 36 was held in mid-October inside the Route 66 Casino & Hotel and would play host to several meaningful bouts including candidates for our “Knockout of the Year” and “Upset of the Year”. While the fight card was packed with notable professionals, it was a curtain-jerking amateur that set the pace for the evening and made a mark on fans in attendance.

Slade Ring of Lutrell’s MMA will have “rear-naked choke” officially listed on his amateur record but the submission was far more than your average rear-naked choke submission; in fact, according to one of our staff members, it was one of the craziest things he’d ever seen live.

“It was a combination of the choke and omoplata. I locked in the shoulder lock tighter by pulling on his neck then grabbed a RNC at the same time. I just refer it as a Omoplata Choke.” – Slade Ring

Slade is quite the submission savant which comes as no surprise to those familiar with Slade’s family name of Ring. Slade’s older brother Falon was also a very talented grappling ace and that talent is seemingly hereditary.

“What the hell was that!?” I remember exclaiming to the other media members that were seated next to me on the Legends Theatre stage. They all looked at me like I was crazy and I felt the same about the casual looks they all had on their faces. None of us had a name to officially title the submission. The omoplata is my favorite submission to see implemented and to witness it used simultaneously with a rear-naked choke made this extremely rare submission an honor to watch.

Phillip’s Commentary: The beauty of this submission is clearly the innovativeness of it as the set-up is so rare that I doubt I have ever seen anything like it. The only think similar that I could recall was Quinn Mulhern hitting an omoplata on one of the Villefort brothers and using it to snake into an arm-triangle. What Slade did was complex that the fans in attendance didn’t really know what happened and for a second it was very silent in the arena. Once it became clear Slade won the cheers came but that moment of hesitation just speaks to the difficulty and rarity of the submission.

It took loads of flexibility from Ring and immense pain tolerance of Lopez to endure the shoulder lock in order for Ring to have the time and opportunity to reach around the neck to get a choke. A way to look at this if you are looking to make some sense out of an “Omoplata Choke”, imagine instead of having hooks in on an opponent or a body triangle, you just have control of one arm in a compression-lock, a very deep Omoplate and then sinking in the arm under the throat for the rear-naked choke.

Being that the choke is so rare that I don’t think it has been executed in MMA competition, at least that has ever hit the internet, it probably isn’t drilled in your traditional grappling class. Lopez, who I would imagine was defending the shoulder lock didn’t realize his neck was vulnerable. That alone shows the creativity and opportunistic style of grappling that Ring brings to the cage. It was an outstanding performance from a very talented grappler.