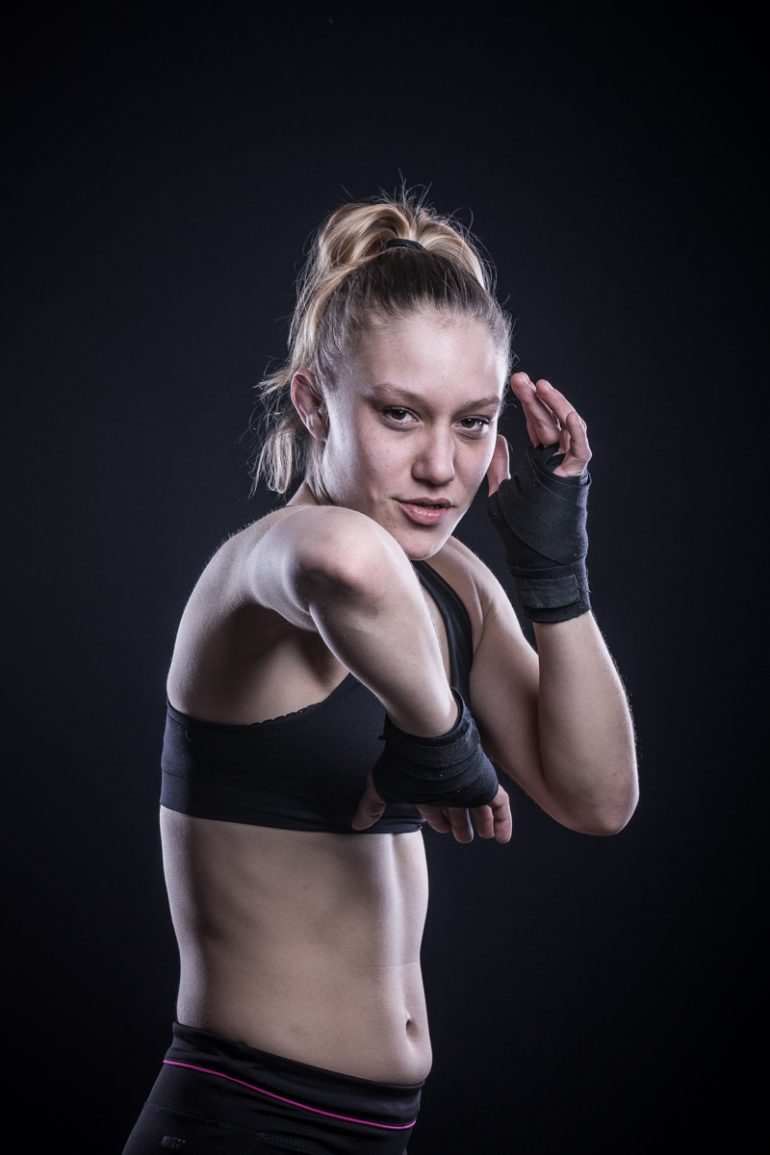 This past weekend in Davenport, Iowa the highly successful all-woman MMA promotion Invicta FC held their 9th show and the second consecutive event broadcast via UFC Fight Pass. Invicta FC has been home to the best women fighters in the world since its creation and first event in mid-2012 and has been home to several of New Mexico’s most prominent fighters. This past weekend was more of the same as New Mexico was featured twice on the fight card and as the dust settled from the event, both local ladies came back home with victories.

Jackson-Wink product Jodie Esquibel (5-1) continued to build on a winning streak and has now put together back-to-back solid performances to win two straight since her submission loss to Alex Chambers. Esquibel outworked Nicdali Rivera-Calanoc (8-8) through the usage of fluid combinations and well-timed takedowns. Angles played a huge role for Esquibel as she was able to stay steps ahead of Rivera-Calanoc for the entire three rounds and by the time Esquibel threw her combinations she had already moved to evade any type of counter. Outside of the final seconds where Rivera-Calanoc locked in a guillotine choke, Esquibel dismantled her foe to a unanimous decision victory.

Jodie Esquibel (pictured right) came out victorious Saturday night at Invicta FC 9 and upped her win streak now to two. What big things are in store for Esquibel in 2015?

Fellow New Mexican, FIT NHB’s Amber “The Bully” Brown (4-1) ended a lengthy 15-month hiatus and made her Invicta FC debut taking on Liz “Lightning McCarthy (2-2). Throughout the course of three rounds, Brown stayed true to her nickname and bullied McCarthy in the clinch and within striking range. To counter, McCarthy worked the takedown where Brown would still stay active with strikes from her back and submission attempts.

It was the damage dealt to McCarthy in the clinch and a well-timed knee to counter a takedown that really stood out as the main theme of the fight. Brown opened up McCarthy significantly and the fight starting in the second frame was an absolutely bloodbath. The fighters matched each other very evenly and that made for a nail-biting moment for both fighters as the judge’s scorecards were announced; Brown would be announced the winner via split decision and McCarthy would leave in defeat who now ironically has two professional split decision losses which both came against New Mexico fighters (Brown & Jodie Esquibel).

The victory may have been more necessary for Brown than Esquibel on Saturday night as Brown had been on the shelf for quite some time and her return to the cage had been heavily anticipated since it was announced she signed with Invicta FC. Brown had more than wins and losses at stake on Saturday night as well as the WMMA ranks within New Mexico is ever developing and “The Bully” was at risk of falling into the fray of talented women athletes.

In 2013, Brown was one of the hottest names in WMMA and around the New Mexico fight scene after her monumental upset over top ranked Kikuyo Ishikawa and with the victory she carried a tremendous amount of buzz heading into her Invicta FC debut. With a prolonged amount of time passing without a fight announcement, fellow Albuquerque trained fighters in the same weight class as Brown were starting to build their own thunder. Esquibel notched a win over Jinh Yu Frey, Santa Fe’s Natalie Roy emerged as a prospect to watch, Holly Holm teammate Nohime Dennison made her return to the cage, and Michelle Waterson became a bonafide star as Invicta FC’s Atomweight Champion.

It would have been easy for Brown to get lost in the mix and just be another talented fighter from an area that produces prospects every single year.

At 25-years old, Brown has yet to definitely enter her “prime” years of her athletic life and with her Invicta FC debut in her back pocket, it will be interesting to watch how Invicta handles Brown’s career going forward. Engaging in an entertaining and bloody affair on UFC Fight Pass will definitely do wonders for Brown’s exposure and can be developed into a future 105-pound title contender for the Champion Waterson who trains just down the road from Brown’s gym of FIT NHB and who knows, before that point Brown may find herself on a collision course with Esquibel, a teammate of Waterson as they have similar records as well as a common opponent in McCarthy.

On behalf of the team here at Southwest Fight News we’d like to congratulate Brown and Esquibel on their victories this past weekend and would like to extend the high praise to their coaches and teammates as both women represented New Mexico perfectly in their execution of high level MMA talents on Saturday night!