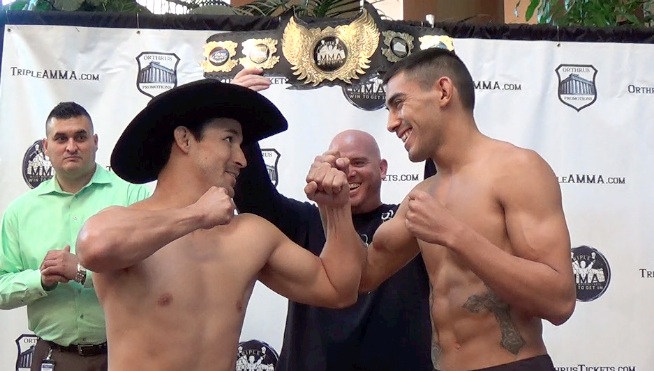 Tom Soto and Andres Quintana will fight for the Triple A MMA title Nov. 8th at the McKernan Events Center in Albuquerque

There will be a delay on our play-by-play. We encourage you to purchase the card on GoFight Live: http://www.gfl.tv/event/Fight/MMA/Triple-A-MMA-X-Genesis/2620. Price to stream the event runs $10.

Round 1: Soto walks straight into a two-punch combo. Soto feints high and attempts takedown to which Quintana does a great job defending despite being in disadvantage position against the cage. Quintana working jab, Soto already bleeding from mouth. Huge switch-kick from Quintana! Cuts Soto on top of the forehead. Quintana unleashes several combinations as he chases Soto around the cage. Soto attempts spinning wheel kick, is completely off balance. Momentary stop in action as ref wants Soto’s cut checked. Doctor comes into cage and waives off the fight.

Round 1: Perez with a huge combination, landed two kicks with the body and dropped a straight right that dropped Reyes. Perez working on ground and pound as Reyes attempts to defend himself. Perez secures deep RNC. Reyes taps for five seconds, ref is late to stop it and Perez continues to hold it. Ref forced to jump on Perez as he does not yield to his instructions to stop. Perez gets scolded by a commissioner in the a cage after the stoppage.

Nash eating some kicks early on. Seems a bit surprised by Ayub kicks speed. Nash forces takedown. Ayub attempting armbar. Nash a former Michigan State wrestler too strong for him on the ground. Nash moves to side control; back to guard. Nash not having trouble getting out of guard. Men stand momentarily and Nash able to tighten hold under Ayub’s neck that made him tap as soon as men hit the ground.

Round 1: Both men very methodical in approach. Tafoya earns ankle-takedown. Tafoya with a deep guillotine, Cepeda doing a great job defending it by staying to Tafoya’s sides. Cepeda finds himself in an RNC. Cepeda trying his best to defend hands. Consecutive back punches from Cepeda land despite being from disadvantaged position. Tafoya rolls over to full mount. Turns triangle to to arm armbar but Cepeda is scrappy and is out. Great standing shots from Cepeda! Tafoya goes down and eats about seven shots the third to last blow appeared to briefly put him out.

Round 1: Nieto very erratic in movement. Forces takedown against cage. Is landing shots with open left arm. Perlingos trying to roll away from cage. Perlingos forces full guard improving his position on back. Nieto putting head into chest; his shots aren’t as effective as men slide into center of cage. Perlingos using rare Phillyshell defense while on back.
Hard kick to Perlingos body puts him down. Perlingos forced to cover up, despartely trying to stand. Gives up back in process. Nieto to full mount. Perlingos very scrappy and is saved by the bell.

Round 2: Nieto stamina is on point comes out swinging in the second. Aggression forces Perlingos to the ground. Nieto dropping consecutive short elbows and shots, ref must feel they’re not effective enough to stop them. Perlingos fails to improve position and after a barrage of short punches and elbows the ref finally stops it.

Round 1: Alba very aggressive with long strikes. Leaving chin exposed. Alba works takedown but is momentarily caught in arm bar. Men back to standing. Alba works double leg takedown. Estrada triangle fails. Men back to standing. Estrada technical with shots  but are delivered slowly. Alba forces another take down. Drops several elbows. Alba controls position with ground and pound. Estrada works rubber-guard and forces stand up but is immediately taken to ground. Deep triangle for Estrada forcing Alba to tap.
Ref completely missed the tap. Men demonstrated great sportsmanship by stopping the bout on their own.