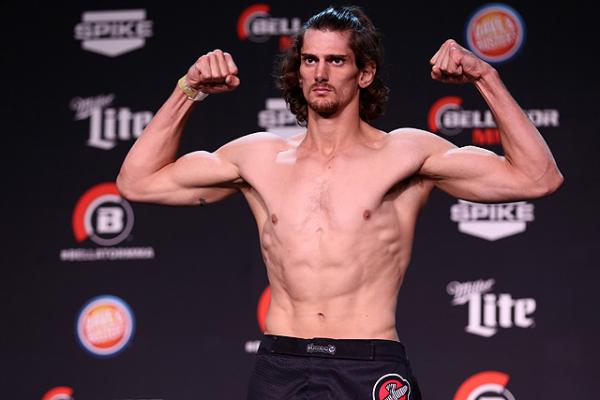 A very talented fighter flying beneath the radar will be featured on the undercard of a major MMA show tonight. While the MMA world has a full plate of action scheduled for tonight, fans of our hard-working locals can tune in to Bellator MMA 131 headlined by Tito Ortiz and Stephan Bonnar to watch one. Live on Spike TV’s website (click here), FIT NHB’s Kyle Bolt will be highlighted in a Middleweight bout against A.J. Matthews.

Bolt vs. Matthews will serve as the “main event” of the Spike.com preliminary card for Bellator 131 and the native to California, Bolt, will be fighting in his backyard. Bolt (8-3) will step into the cage for the first time in 2014 and the first outing since first round TKO victory last September.

A finishing machine, Bolt has only seen a judge’s scorecard once in his eleven professional outings and has finished opponents in a variety of ways including knockouts, submissions from his back, and a heel-hook. The tall Bolt has a knack for finding openings wherever the fight takes place and is currently on a two fight win streak since his most recent loss that took place during his Bellator MMA debut last February.

“The Mercenary” A.J. Matthews (6-3) was once labeled by Sherdog on their “Prospect Watch” but has fallen on some tough times in his last two outings. A veteran of King of the Cage, Strikeforce, and a three fight Bellator MMA veteran, Matthews is a known as a hard-hitter and will be hungry to right the ship and get back to his winning ways when he was considered a hot prospect.

Bolt will enter into the Bellator MMA cage with a considerable height advantage and will be comfortable wherever the fight takes place. Initially training out of San Diego, California the large Middleweight now trains out of Albuquerque’s FIT NHB with Jon Judy, Tom and Arlene Vaughn, and the gym’s “Wild Bunch” competition team.

The fight would be arguably the biggest fight of Bolt’s career thus far as a three fight win streak and a victory on the featured online billing would definitely boost the exposure levels for Bolt and propel him into more featured bouts.

Join us on sending our best wishes to Bolt and his team out in California and tune in to spike.com at 5:00 PM for the prelims of the “Ortiz vs. Bonnar” Bellator MMA event.