The creator of the infamous 10th Planet Jiu JItsu system will be in New Mexico for a seminar on November 29th and for all of you Jiu Jitsu enthusiasts we encourage that you not miss the opportunity to attend, 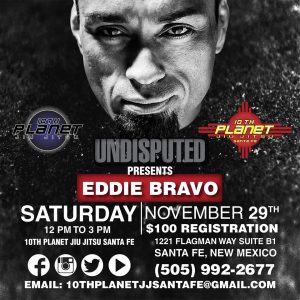 Eddie Bravo is a well-known figure in both the grappling community as well as the MMA world as his friendship with UFC play-by-play guru Joe Rogan has gained Bravo tremendous notoriety in the world of hand-to-hand combat. Bravo’s infamy began back in 2003 when he pulled off arguably the biggest upset in competition Jiu Jitsu history by submitting the iconic Royler Gracie in Abu Dhabi for the ADCC tournament that featured the best grapplers in the world.

After the victory over Royler, Bravo would not only gain notoriety but he would also earn respect and validation from the grappling community. While Bravo’s lineage can be traced back to the Gracie family, the gifted grappler is a third-degree Black Belt under the legendary Jean Jacques Machado. Bravo would develop his own Jiu Jitsu system that became known as 10th Planet Jiu Jitsu and the style has been the most polarizing spinoffs of Traditional Brazilian Jiu Jitsu in the history of competitive grappling.

10th Planet Jiu Jitsu is solely trained without the use of a Gi and the system features some of the most interesting names to maneuvers in any sport; The Zombie, Crackhead Control , and The Electric Chair are just three of so many other intriguing names. In fact, the staple of the system, the Rubber Guard or sometimes referred to as Mission Control is as unorthodox as it gets as the position involves the practitioner breaking down an opponent’s posture with the use of a leg coming all the way up an opponent’s back very close to the practitioner’s face. It utilizes extensive flexibility to control the opponent with one arm and one leg while leaving the free arm the opportunity to attack with submissions, sweeps or even to strike if utilized in the confines of MMA.

The crafty Innovator of 10th Planet Jiu Jitsu will be in Santa Fe at the Undispited/10th Planet Jiu Jitsu Santa Fe gym for a “can’t miss it” seminar. Bravo has ties to the founder of the Undisputed gym Tait Fletcher and Bravo has continued to influence the talents of the gym’s inhabitants for several years. The current Lead of the Jiu Jitsu program Ruben Rivera is a Brown Belt in the system and had this to say of Bravo and his system of grappling:

“The 10th Planet System is constantly growing, adapting and evolving. I believe evolution is crucial to a competitive athlete that wants to stay on top in the grappling world. Eddie Bravo has taught me to view Jiu Jitsu as a scientist would. To observe, experiment, test and retest every movement we practice. I am a better grappler because of Eddie.” – Ruben Rivera

The seminar details are as follows:

The cost for attending is $100 and to sign up or for more information please contact the hosting gym at (505) 992-2677 or 10thplanetjjsantafe@gmail.com