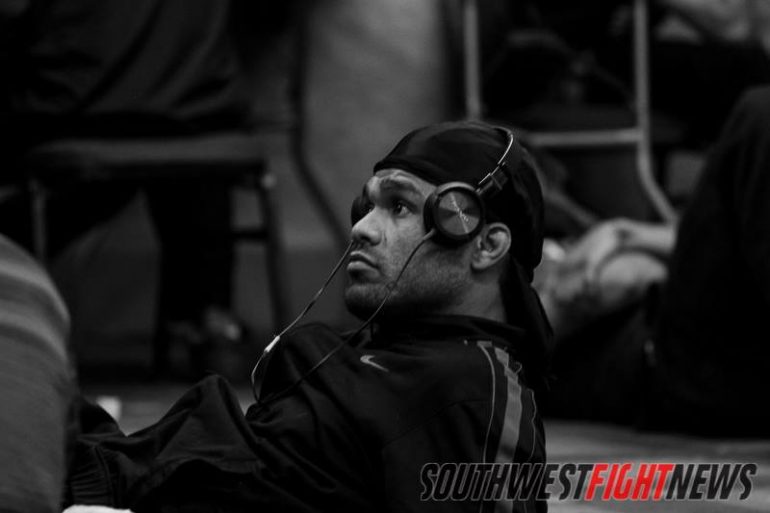 In just a few hours, King of the Cage “Duke City” will invade the Crowne Plaza Hotel near Downtown Albuquerque for what is being billed as the most stacked fight card the promotion has hosted in quite a while with three notable professional bouts and a whole slew of recognizable amateurs featured on the undercard. You still have time to make arrangements for tonight’s festivities and aside from a SWFight t-shirt giveaway to entice you to attend, in today’s featured article we give you some hard-to-argue points as to why you should be attendance for tonight’s show. 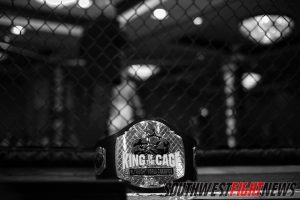 “Duke City” Is A Family Affair

Last week we featured an article about John and Anthony Rozema, the fighting brothers out of Judgement MMA. What make the show even more relative to the “family affair” theme as the Nater Brothers of FIT NHB will also be featured on the evening’s lineup.

Rick, Dave, and Roberto all hit the scales yesterday in anticipation of their respective MMA bouts. Each in their own weight classes, the Nater brothers all play their own roles at the FIT NHB gym and will all be featured at the same for the very first time.

The smallest Nater, Roberto (118.6 pounds) will take on James Wilkerson while the much larger Dave (177.6 pounds) and Rick (133 pounds) do not have verified opponents. It was reported that Dave’s opponent was late arriving yesterday to the weigh-in event but an opponent for Rick was listed as TBD.

A trifecta for the Nater brothers may be falling apart but as of publishing, all three are expected to compete tonight.

SWFight’s Own Takes To The KOTC Cage

Making her amateur debut in the cage tonight, the talented photographer who has been delivering the “goods” so-to-speak for the coverage team at Southwest Fight News, Ruby Santos will definitely be our site’s marquee name on the fight card.

With a background in wrestling and part of the talented female competition team at FIT NHB, Santos should be one of the most interesting parts of the fight card and against a talented opponent in Allison Price, the fight should be yet another exciting WMMA bout for the King of the Cage promotion.

King of the Cage has a healthy reputation for promoting very exciting female bouts and this shouldn’t be any different.

Bronson Mitchell Is A Prospect To Keep An Eye On

Despite a setback last month at Albuquerque’s first RFA event, the 20-year old Bronson Mitchell is one of New Mexico’s fight scene’s most gifted athletes and most talented grapplers. The lightweight is explosive on the feet and technical on the mats which makes him one of the more unfavorable match-ups any amateur 155-pounder will encounter.

At such a young age with his impressive tool set of talents, Mitchell is one of the young fighters in New Mexico that should be given ample attention as he may become one of the fighters in the new wave of MMA developing within our state lines, His match-up with David Carter should definitely be a fun bout for fight fans in attendance. 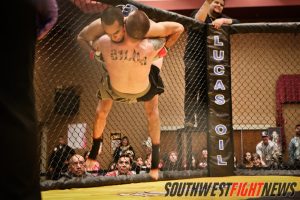 Jesse Sandoval Is On the Fight Card

It is that simple. Jesse Sandoval of Judgement MMA is fighting and when this exciting amateur is fighting then it is a good time to find your seat and strap on the seatbelt. In seven amateur outings, Sandoval has yet to disappoint the crowd through his performance and win or lose, Sandoval leaves it all in the cage.

Winning three of his last four and coming very close to beating a talented Luis Castillo in a fight Sandoval lost via split decision, Sandoval is a hot commodity in the 145-pound amateur weight class. His striking is technical and effective and if an opponent decides to ground the Judgement MMA fighter, he is crafty and durable on the mat making it nearly impossible to get into a rhythm or mount offense to gain marginal advantages.

Meanwhile, Sandoval will beat you up from any offensive or defensive position and has the cardio to take anyone into deep waters. He is the energizer bunny with a vast handle on combat talents.

After extensive and successful amateur campaigns, FIT NHB fighters George Clynes and Charlie Brown Williams will make their professional debuts. The two talented, tough, and durable fighters have been a staple of the amateur circuit for years and are amongst the most notable local figures fighting regionally.

George Clynes is a former member of our United States Marine Corp and comes to the cage as one of toughest 170-pound fighters you will ever encounter. “The Magnificent Bastard” is more than just a catchy nickname, a powerful ground-and-pound artist with one-punch knockout danger.

Charlie Brown Williams has been a topic of discussion for possibly the most successful amateur in New Mexico. In his last outing, Williams punched opponent Juan Gandara into unconsciousness with one brutal strike and immediately cemented his case for becoming a professional. Williams will enter the professional ranks as a “must-watch” fighter who definitely has a chance to make a name for himself.

Through a well-rounded skill set that includes a very impressive ground game, slick sweeps and crafty submissions, Williams is dangerous anywhere the fight takes place. His opponent Federico Betancourt is definitely a game opponent and this 135-pound pro contest may be the show stealer on the fight card. 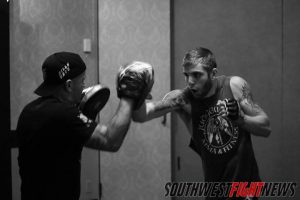 If there is one word to describe John Rozema’s fighting style it is ….. show-stopping. The Judgement MMA fighter has the type of power in his hands that it only takes a single connection to change the complexion of the fight. You can verify this through his six career victories all of which came via knockout.

There is good reason why Rozema has topped several fight cards this year and it is because he has a reputation for leaving fight fans in attendance satisfied at the end of the night. Rozema has found tremendous success in his amateur and professional outings but it seems as if every fight comes with dramatic effect for fight fans. The “Rock’em Sock’em” nickname encompasses the results of fights as Rozema tends to oblige opponents willing to slug it out which allows Rozema to find an opening for his knockout blow.

Judgement MMA tends to bring the loudest supporting crowd for their fighters and when the main event starts, the building erupts and the buzz in the room is felt by everyone regardless of their team affiliation. John Rozema is definitely worth the price of admission for any local event.

The doors open at 5 PM tonight at the Crowne Plaza Hotel and ticket will be limited but may still be available at the door so we encourage fans to get to the venue early! “Duke City” is one of the best lineups this year for the local promotions and King of the Cage is on quite the run of promoting exciting bouts from start to finish.