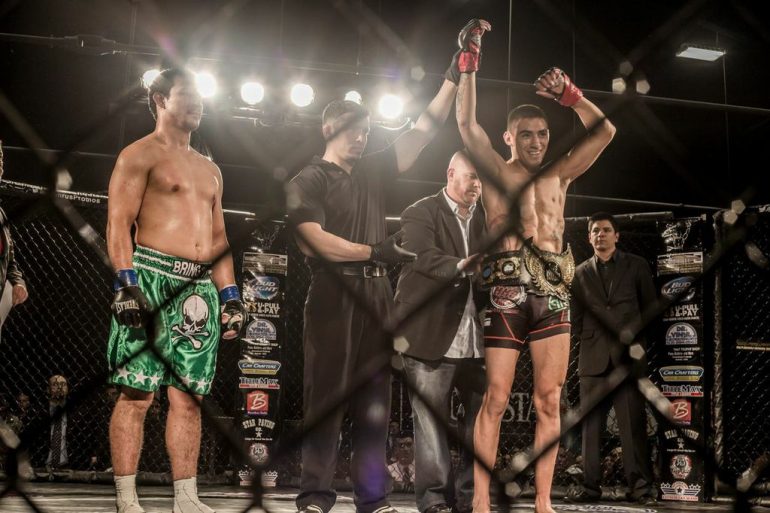 Taking a page out of Friday’s UFC Fight Night 55, Triple A MMA’s Genesis card Saturday night at the McKernan Events Center in Albuquerque, New Mexico’s South Valley served up a slew of fights that did not need a judges’ decision that includes the main event between Albuquerque’s Andres Quintana and El Paso’s Tom Soto.

After the men were already in the cage an atypical extended introduction would follow as the men’s now widely known hype video was shown to the fans in attendance and to those streaming fight online.

Once the fight commenced Soto (5-2) would walk right into a Quintana two-punch combination.

Immediately noticing a speed disadvantage, Soto would feint high and attempt a takedown that Quintana would defend in a tussle.

Quintana (8-1), would then establish a jab that would draw blood from Soto’s  mouth. Quintana would later follow with a huge switch-kick. The impact of his shin would cause a gash on Soto’s brow-line.

The Roswell native would unleash a series of punching combination’s forcing the Texan to retreat. A wild wheel-kick that missed wide would be Soto’s only defense to the onslaught.

After a brief stoppage in the action referee Joe Coca would ask the cageside physician to step in to take a look at Soto’s cut.

Despite not large amount of blood coming from Soto’s cut the doctor felt that the wound was grave enough to call a halt to the action.

With his eighth consecutive TKO win, Quintana becomes a serious player in the regional circuit and should draw considerable interest from national promotions.

Many did not give Belen’s Derek Perez (2-3) a shot to defeat Albuquerque’s Isaiah Reyes (7-6) on short notice in the men’s co-main event fight.

Perez had other plans starting off the bout strong by landing a huge two-kick combination that dropped Reyes. The follow up ground and pound would see a scrappy Reyes eat some big shots.

Perez would find room to secure a deep rear-naked choke. After several taps of submission from Reyes, the referee Raul Porrata, would react late to stop the bout, and to make matters worse would then have to deal with Perez’s reluctancy to release the hold.

Porrata would have to aggressively pull Perez away from Reyes. A member of the New Mexico Athletic Commission would come into the cage and scold Perez for his actions.

Perez has been disciplined in the past by the NMAC and it will not be a surprise if he is reprimanded in one way or another for his actions in his fight against Reyes.

His actions put a black eye on what otherwise was a phenomenal 58-second performance.

In the other professional bouts of the evening Jackson’s MMA’s Bobby Nash overcame a rocky start from a game Marcos Ayub and was able to use his Michigan State wrestling background to submit the Brazilian Jiu-Jitsu black belt Ayub, in the first round.

Dixon would instinctually pounce on Batts and end the contest in the first round with a rear-naked choke.

Cepeda Anything but Amateur in Competitive Fight

Cepeda’s defense on the ground would force the fight on the feet where he would have the edge demonstrating slick boxing. A combination would floor Tafoya. Cepeda’s ground and pound uppercuts and hammerfists would rock Tafoya to the point where the referee had no choice to stop the action.