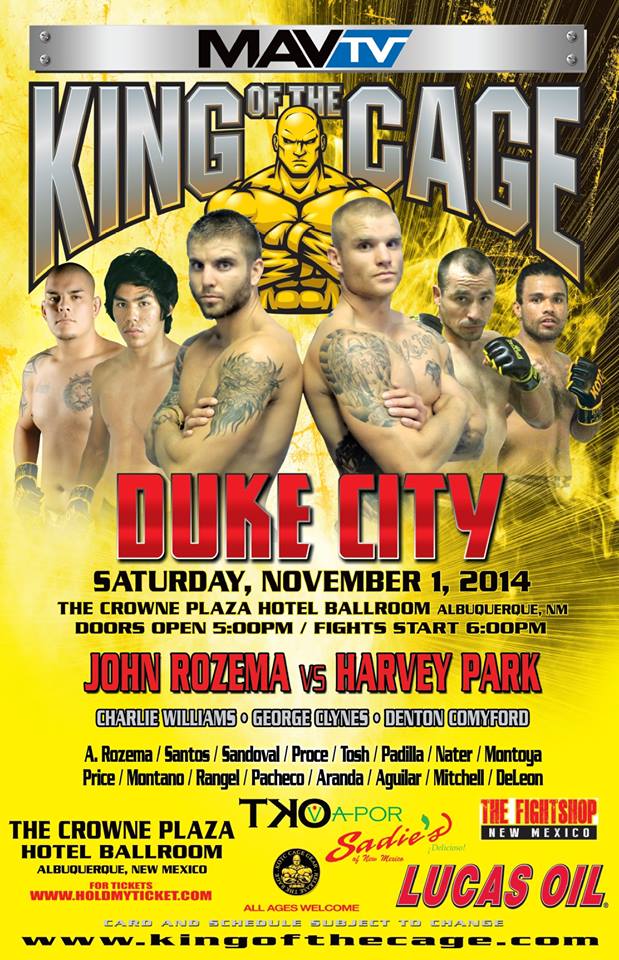 On November 1st, King of the Cage is turning it up a notch to bring fight fans a stacked fight card full of notable fighters and intriguing match-ups. King of the Cage “Duke City” is arguably one of the best fight cards the promotion has hosted in quite a while and with three pro fighters currently scheduled, the event is definitely one of the best fight cards lined up for the end of 2014. Headlined by two very promising professionals representing FIT NHB and Judgement MMA, November 1st has plenty of buzz to satisfy anyone’s MMA needs.

Judgement MMA’s John Rozema (2-0, 1 NC) will headline the event and as the featured fighter, the hard-hitting striker will take on the task of sending the fight fans home excited. His counterpart in the cage will be Force of 1 MMA’s Harvey Park (0-0 pro, 8-1 amateur) of Clovis who loves the striking aspect of MMA but has shown to be a grappling technician with several victories by submission. The two 155-pound fighters will look to take one step closer towards top prospect status in the state of New Mexico. Rozema is already on the radar as one of the area’s most exciting fighters and with a highlight reel of knockouts already linked to “Rock’em Sock’em”, he will undoubtedly enter the bout as the odds on favorite and the fan favorite as well.

Two FIT NHB fighters will be featured in the other two professional bouts and both will make their long-awaited professional debuts. With more than ten amateur bout victories between them, Charlie Brown Williams and George Clynes will take on opponents in the 135-pound and 170-pound divisions respectively. The suffocating powerhouse Clynes, owner of one of MMA’s more colorful nicknames “The Magnificent Bastard”, will pair up with High Altitude’s Denton Comyford while the well-rounded talents of Williams will be tested by a very formidable Federico Betancourt of El Paso, Texas.

Brother to the headlining act, Anthony Rozema will also be featured on the card. The more imposing of the Rozema brothers. Anthony will make his King of the Cage debut in what is his highest profile bout to date. Other Judgement MMA fighters expected on the card are Brianna Padilla and the always exciting Jesse Sandoval.

The biggest card of the year for King of the Cage is guaranteed to pack the house inside the Crowne Plaza Hotel. The undercard is filled with top amateur talent from throughout New Mexico and is shaping up to be the biggest card the promotion has ever thrown within our state lines! Tickets start at just $35 and are available now at www.holdmyticket.com or by contracting your favorite fighter!