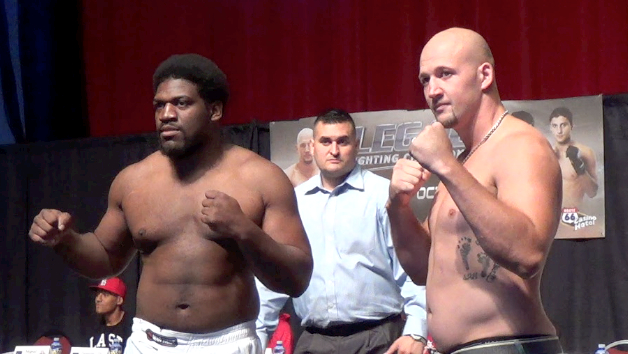 There was some confusion that took place during the Rafael “Barata” de Freitas and Jordan Espinosa bout weigh-in. Espinosa weighed in at 127.2lbs, .2 pounds over what Espinosa would say was the +/-2lbs contracted amount in his agreement. When Espinosa offered to remove his underwear to make the .2lbs de Freitas trainer Melcor Chavez would respond that +/-1lb was in their contract, causing confusion among those in attendance and the commission.

After a post-weigh-in discussion according to Espinosa, he would not only be vindicated but would also not have to cut the .2lbs, a weight he would have easily made either way.

Another notable issue was the abscence of Clint Roberts’ opponent Lenny Lovato Jr. who according to sources did finally show up and weigh-in overweight well after the official weigh-in took place.

Tickets to tomorrow night’s Legacy FC 36 card are still available and can be purchased by clicking HERE.