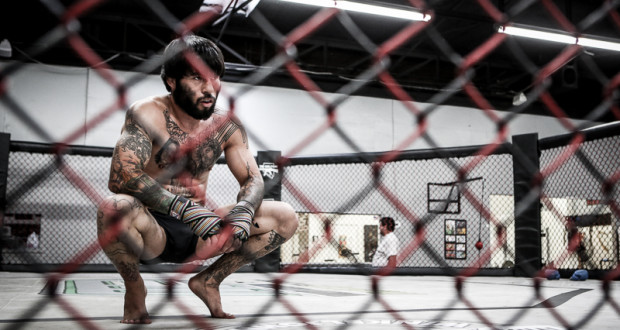 Damacio Page may be one of the most well-known mixed martial artists to ever represent New Mexico as his prominence in the sport dates back 27-fights ago to February of 2005. In that span “The Angel of Death” has made his mark through exciting fights, epic knockouts and showdowns with MMA pioneers (Genki Sudo) and UFC Champions (Demetrious Johnson). This Friday night, Page has an opportunity to win a regional promotion’s title and validate his stake to once again make it to the big show.

In July of 2012, many experts and analysts would tell you that it appeared as if Damacio Page’s status as a top-level fighter was completely finished. Page had lost four in a row, three of which came in the UFC after the WEC merger and all of those losses came via submission. Four losses sounds as bad as it can get for an upper echelon fighter, but losing to such opponents as eventual UFC Champion Johnson, former WEC Champ Brian Bowles, and perennial contenders Alex Caceres and Brad Pickett was more of a case of getting tough match-up after tough match-up. Regardless, long gone were the days of Page knocking out Will Campuzano and Bellator title challenger Marco Galvao and picking up the judge’s nod over Scott Jorgensen.

The aura around Page had been taken from him, he was cut from the UFC and it was unknown at that time what would happen to “The Angel of Death”, one of New Mexico’s most iconic figures in combat sports.

A storyline not often discussed was the impact of the WEC merger into the UFC. While it gave fight fans new and intriguing match-ups between the best of what the WEC had to offer, it also took away an entire promotion for fighters to call home. The margin for error in the UFC was tighter as the promotion had to expand their roster considerably to host the merger and fighters like Page who could have stayed on the comeback trail in the WEC now found himself back to the regional circuit.

Page (18-9) took nearly a year off before he stepped back in the cage and in his first post-UFC bout he showed exactly why he was once considered one of the best bantamweight fighters in the world. It took under two minutes for Page to land a crushing blow to opponent Patrick Ybarra that ended the fight promptly due to Ybarra being rendered unconscious. It would mark the beginning of a comeback journey for Page and also establish a relationship with the Texas-based promotion Legacy FC. Making the cut down to 125-pounds suddenly sparked life into Page’s career resurgence and gave life to the opportunity of making it back to the UFC.

Since being cut from the UFC his lone blemish was dropping a split decision loss in Sweden 13-months ago. With the loss, Page has won three of four and all three victories have come under the Legacy FC banner. Most recently, Page notched a submission victory over Elias Garcia at Legacy 31 this past June. The event was supposed to feature Page fighting Henry Cejudo for the promotions Flyweight title however Cejudo would pull out of the fight and go on to sign with the UFC. With that opportunity behind him, Page is now getting that shot to fight for the Legacy title but he will meet up with a challenger who brings to the table a much difference skill set than the Olympic wrestler Cejudo.

Brian “The Law” Hall (7-2)  will travel from Memphis, Tennessee as he seeks out a career defining victory over an iconic MMA figure. Hall isn’t the imposing takedown specialist that Cejudo is, but considering he comes with a gym that is named after the ground game, Memphis Judo & Jiu Jitsu,  he is much more dangerous in the striking aspect as he has finished four fights via strikes and has won five of his last six including two TKO wins for Bellator MMA.

The event’s match-maker definitely had the fans in mind when putting together this bout as Page has grown fond of the knockout and Hall will likely oblige Page’s desire to stand in the pocket to trade. Should Page revert back to his roots as a wrestler, Hall’s ground game will be featured as Page has shown himself susceptible to getting into dangerous positions on the ground. Wherever this fight takes place it should be exciting and with the stakes so high, each fighter should come out to fight with their “A-game”.

A win for Page crowns him the promotion’s Champion; Legacy FC is known as one of the top feeder leagues to the UFC and their Champions definitely get a more in-depth look from the UFC brass. For Hall, a win redefines his career and gets him a marquee victory over a former UFC fighter which could propel him into the spotlight as a fighter the UFC now has on their radar. Both fighters are 32-years old and a loss could be a huge setback if their ambitions is making it to the big show.

Sounds like two hungry fighters will come out Friday night to put on a show.

Legacy FC 36 takes place this Friday, October 17th at the Route 66 Casino just outside of Albuquerque. The doors open at 6:00 pm, fights start promptly at 7:00 pm. You can purchase tickets from your favorite fighter, from rt66casino.com, Cage Tix (https://www.cagetix.com/legacy) or call 505-884-7484.